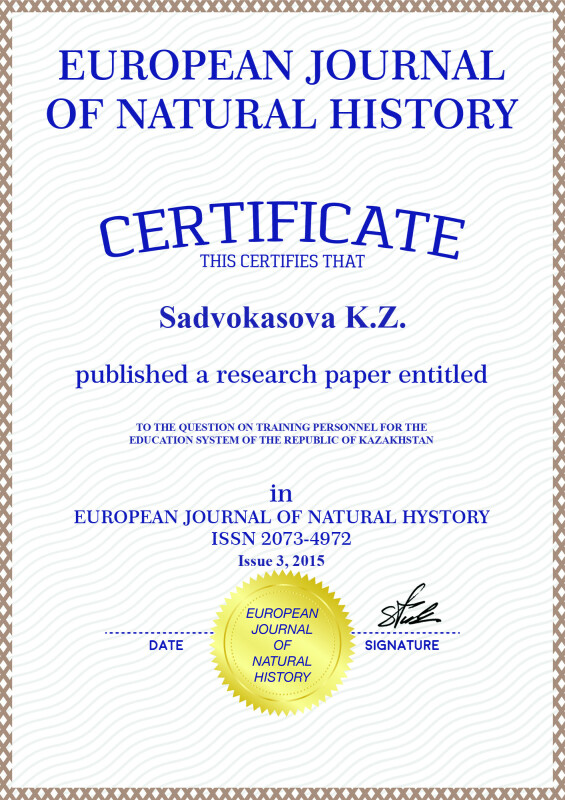 Since the day of obtaining independence and sovereignty by republic of Kazakhstan large-scale reformations took place within the system of education and especially in the area of higher education. Their purpose is to integrate Kazakh educational system into European space of education. And though certain achievement in this direction are clear, a number of problems remains, particularly in the area of training personnel for the system of education, defined by objective and subjective factors.

If we are to outline basic stages of reforming higher education in RK, they will be presented as follows:

– Stage 1 (1991–1994) – period of foundation and development of legislative and norm-regulative basics of higher education;

– Stage 3 (1999–present days) – period of decentralization of management and financing of education, broadening of academic freedoms for higher educational institutions.

The second stage is mostly described by acceptation of Concept of state policy in the area of education, confirmed by National council of state policy by President of republic of Kazakhstan on the 4th of August 1995 via accepting new regulations that would control activity of higher educational institutions. It was necessary since private sector of education began to develop intensively during this period. At the same time, educational standards on 310 specialties of higher professional education are introduced in Kazakhstan for the first time, and in 1996 new Classifier (registry) of specialties in higher education of republic of Kazakhstan that includes 342 specialties, is confirmed.

The third stage is described as period of decentralization in management and financing of education, broadening in academic freedoms of higher educational institutions. We should underline that before 1999 legal foundations of developing educational system were regulated by two laws: “On education” and “On higher education”, accepted in 1992 and 1993. Therefore, in June 1999 a new Law of Republic of Kazakhstan “On education” was accepted. On the 30th of September of 2000 by Order of the President of Republic of Kazakhstan State programme “Education” was confirmed. The following measures were undertaken during the coming years.

3. On the 13th of March 2004 Regulation of Government of Republic of Kazakhstan “On introducing a single national testing” was emitted. According to it, total state attestation of graduates from secondary general education was combined with receiving exams into secondary professional and higher professional educational institutions;

5. Nowadays State programme of developing education in Republic of Kazakhstan for 2011–2020 is in force, and further measures on improving quality of special training in all areas of economy, including the area of higher education, is in force [1].

A three-level structure of higher and postgraduate education has been legally fixed in Republic of Kazakhstan: bachorship – master’s degree – doctor’s degree of PhD. Classification of universities has also been introduced: academies, institutes, universities, research universities, national research universities, national institutions of higher education. At the beginning of 2014 131 university functioned in the country, of them 9 national, 1 international, 1 autonomous, 31 state, and 16 joint-stock universities, 60 private, and 13 non-civil institutions [2]. Dynamics in number of students, undergraduates, doctor candidates who took training in universities during the recent years changed in the following direction:

As the presented data shows, during the recent 5 years a sharp decrease in number of students took place (– 83028 people) alongside with an increase in number of undergraduates by almost 2 (+ 13887 people) and, therefore, doctor candidates by more than 2 (+ 867 people). On the one hand, this fact reflects problems of demographic situation in bachelorship, on the other hand, the results of transition towards three-level structure of education in RK. As for decrease in number of bachelor students, it is explained by the effect of demographic gap. Number of school graduates, in other words, potential university entrants, decreased from 191000 in 2006 to 138000 in 2010. Since 2007 number of students who take training annually in RK decreased by more than 100000 people (drop by 15 %).

Regarding students-bachelors, this fact is defined by the effect of demographic gap. Number of school graduates, in other words, potential university entrants, decreased from 191000 in 2006 to 138000 in 2010. Since 2007 number of students, who take education in RK annually, decreased by more than 100000 people (drop by 15 %). It states the fact that number of students who enter universities in RK decreases annually [2]. As demographs predict, such decrease in number of youth in senior school and student’s age will continue until 2017–2018. No doubt, complication of demographic situation will cause conflicting processes in development of high school. On the other hand, decrease in number of students defines decrease in state budget financing of higher education. Thus, according to data of the Ministry of education and science of RK, on the 1st of January 2014 144396 people or 27,3 % of the total number of students took education on basis of state educational grant, while 382830 students or 72,7 % of total number, were educated on commercial basis. The majority of commercial students take training in private universities. Thus, only 10 % of educational organizations’ graduates can receive education on state budget, and it decreases availability of free higher education, and volume of state financing can provide only 50 % of total needs of economy. Frequently low quality of the provided educational services by private universities defines a trend to take education abroad among the Kazakh youth. More than 20000 people take education in foreign universities nowadays [2].

Thus, nowadays we can outline the following conclusions and problems in training staff for the system of higher education that must be solved in complex:

1. Personnel problem, related to a rapid aging among professors and tutors of universities;

3. System of managing higher educational institutions does not allow them to realize their potential abilities in providing training that would overtake development of the country’s economy;

4. Cost of commercial higher education that sometimes exceeds paying abilities of families with moderate income. Educational costs of Kazakhstan government are usually limited within state universities. Though succession of knowledge and access to education is condition of development for every economy;

5. Conscious transformation of education into the area of making profit, it does not only have a negative effect upon education quality, but also leads to degradation of state. It is claimed by the Universal declaration on higher education for the XXI century which also underlines the necessity of adequate higher education and modern scientific-research institutions that create critical mass of qualified and educated people, without which no country I able to establish real and stable development.

6. Most universities do not bear a direct responsibility for employment of their graduates, especially those who take commercial education. The number of unemployed young specialists remains great as well as those who are employed in a different specialty. The existing duplication in training staff within state and private universities leads to overproduction and different levels of training specialist of similar profile.

However, among all these mentioned problems, the most important is the problem of staff. Aging among university professors and tutors and abolition of old Soviet system of awarding scientific degrees (candidate and doctor of science, cancellation of postgraduates courses) have led to certain disbalances. Thus, part of tutors with scientific degree equaled 49,7 % of the total number of 41635 tutors in 2014, including 4116 doctors of science (9,8 %) , 15908 candidates of science (38,2 %), 694 doctors in philosophy PhD (1,7 %). The part of tutors with academic degree equaled 20,7 %. Besides, more than half of full-time tutors were women. Their number equaled 26614 people or 64 %, accordingly, part of male tutors equaled 36 % [2].

Losses, beared by Kazakh science during the years of post-Soviet crisis have led, first of all, to a disappointing aging of scientific staff. Average age of a doctor of science equaled 56 y.o.a., candidate o science – 46 y.o.a., scientific worker / tutor without a scientific degree – 39 y.o.a. Regardless of a certain flow youth into scientific environment, experts claim that the problem of rejuvenation of Kazakh science is far from its solution. All the mentioned factors have created a number of problems: tutors, who received extramural education and never worked in their specialty, have a poor knowledge in their subject, young tutors, who took education in 1990-ies, had no normal productive practical experience, therefore, know their subject theoretically and have no productive experience. Knowledge that they present during classes, is known to them only in theory, and they have never seen the real process of it. Therefore, there are usually a lot of elder and young tutors at departments, but few tutors of middle age, and this fact affects quality of specialists’ training, first of all, for the system of education.