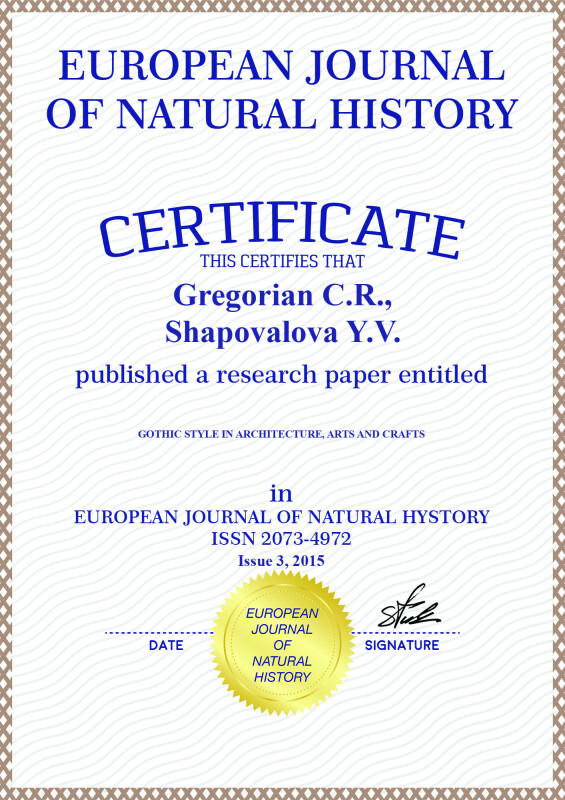 The gothic art had been experienced in XII-XV centuries in Western Europe. A typical middle-age city appeared as an interlacement of narrow dark streets with the only main cathedral square. It is impossible toseparatethe terms “gothics” and “gothic cathedral”. First gothic cathedrals appeared in Northern France and after some time they became famous all over Europe. The cathedral was not just a place to pray. It represented all the ideas about the world, consciousness and beauty. Actually, it represented God, Nature and a Human.

The interiors of gothic cathedrals impress with their vastness and complexity. The main space consists of the high central nave and the lower appendix naves. The floor is extremely simple, although there are some places covered with mosaics with sacral meaning. Everything achieved in gothic style was attained against the nature of stone. The gothic architecture is represented with denying of the texture and characteristics of stone. Famous German scientist and architect V. Worringer admits that the only way to make the form endless is to make it visuallyendless. The gothic architects reached this visual effect using the extreme vertical accents. That is why all we see is the stained movement into the sky.

The exterior and interior design of the St. Stephan`s Cathedral, Austria, Vienna

The main idea of the gothic construction is minimization of the weight on the walls due to special sharp windows. The pressure of the groin is leaned on the columns by ribs and arches and the lateral thrust is perceived by flying buttresses and counterforts.

The most significant discovery of gothic architecture is a crusade rib vault. It interacted with interior system of columns and exterior system of mainstay – the counterforces.

So, as you can see, it was not a problem to neutralize the lateral nave, but it was quite a difficult challenge to neutralize the middle nave. In this case, the architects used a special arch made from wedge stone – so called buttresses. One end of the buttress was stuck into the vault and the other in the counterforce. The place where the buttress connected with the counterforce was fixed with a little tower – a pinnacle.

Architects often constructed two lines of buttresses. The upper line of buttresses was a mainstay for the roof and the lower one was made to fight the force of wind. This innovation transformed the walls from very thick and strong abutment into subtle and thin decorative cover. The walls were not a bearing construction anymore, so the architects could make many huge windows with magnetic stained glasses. The windows almost replaced the walls due to improvement of the technical methods and expansion of inner space.

The interiors of the earlier gothics were quite minimalistic and resembled Romanics. Nevertheless, since the XV century the interior decoration became richly filled with ornaments and looked like miniature cathedrals.

The ornaments could be geometrical or floral. In both cases it was a tracery made with accurately interlaced spherical and straight lines. The result is a difficult drawing that resembles the ribs of gothic constructions. In the picture below you can see the ornamental imitation of the Gothic Rose – a round window above the central entrance of the cathedrals. It was widely used in furniture decorations. Besides, the furniture is richly decorated with wooden and ivory sculptures.

The architectural forms influenced on the jewelry art either. Big jewelry centers were based in France, Germany and Italy in the XII century. Rings with stones were very popular. Rich people wore 4–5 massive rings on one hand. The rings differed according to their functions, for instance there were wedding rings and stamp-rings of the politicians. The jewelers used rich floral ornaments. A crown of Ludovico the XI is a typical example of gothic jewelry art.

The vertical lines and sharp forms resemble traditional gothic architecture and colorful stones are miniature imitation of stained – glass. This is one of the first European crowns – an iron crown of the Queen Teodelinda. It was made in Constantinople in 593–595 years. According to a legend it was made from a nail of Jesus Christ`s punishment. On one hand, 8 laminas symbolize 8 corners of Jerusalem while on the other the number 8 represents perfection and eternity. The enamel is also an imitation of stained glass.

Objects of fine arts should be perfect if they are made to materialize divine influence of God. In Middle Ages new philosophical ideas and esthetic images appeared. It` main idea – Christianity – penetrated into people’s souls. Great interest to human identity and morality was shown.

And finally let`s conclude that gothic art – is the most impressive manifestation of the Middle age. It created colossal architectural ensembles and other masterpieces of monumental arts. It synthesized different kinds of art. Future has shown what grand contribution gothic craftsmen made in global history of fine arts.

The work is submitted to the International Scientific Conference “ Information and communication culture: science and education ” e-conference correspondence, came to the editorial office оn 24.05.2015.