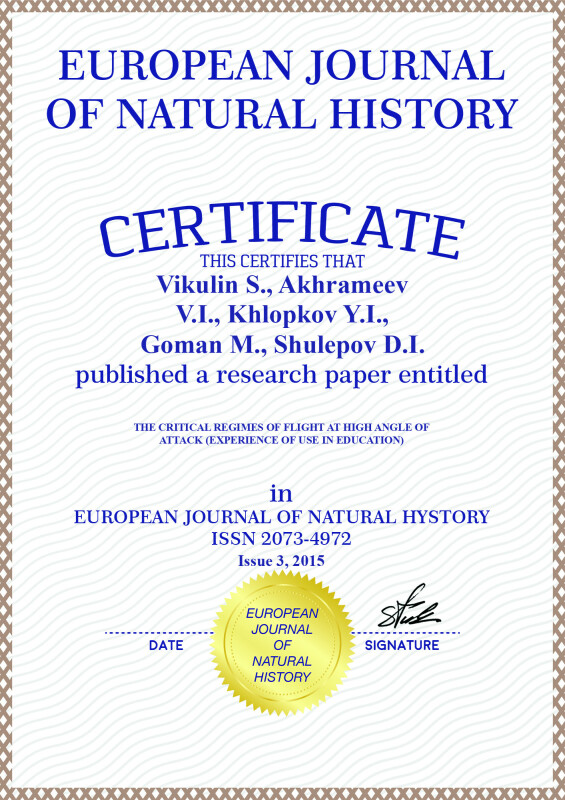 The work presents scientifically-educational video film “The flight at high angles of attack”. This video film is about the physical aspects and, mathematical models, wind tunnels experiments for the flights of airplanes at high angles of attack. Bright present aero physical experiments in the wind tunnels of Central Aero hydrodynamics Institute (TsAGI), flight experiments in Flight Research Institute (LII), mathematical models elaborated with Moscow Institute of Physics and Technology (MIPT). Besides it’s shown the role of this video film in the educational process of the Department of Aeromechanics and Flight Engineering of Moscow Institute of Physics and Technology.

The work concerns the most difficult, “eternal” aerodynamic problem – the flight under critical regimes. High angles of attack lead to breakdown of flow with foil’s surface, abrupt to deterioration aerodynamic characteristics, loss of a stability of a flying machine, entrance it in fail. Problem is multiplane. It is connected with a research of complicated structure of flow in laminar and turbulent boundary layer, conduction thin aero dynamical experiment, connected with nonstationarity, solution Navier-Stokes and Reynolds equations, research of a stability and control aircraft, conduction bench and flight experiment, tutoring of the pilots.

The educational plan of faculty of aeromechanics and flight engineering MIPT consists of institute cycle, uniform for the students of all faculties, fundamental aerospace cycle, uniform for all students of aeromechanics faculty, and base cycle, where for the students are read special courses (different for various sub-departments of a base). There are 10 base sub-departments on the faculty, placed in three scientific centers – Central Aero hydrodynamic Institute, Flight Research Institute, Central Institute of Aviation Motors. On these sub-departments are read about 100 courses.

Analyzing these mathematical relations it is possible to say that the radius of the turn will be minimum and the turn angular velocity will be maximum if the airspeed of the flight is rather small but the load factor is maximum. The maximum load factor is reached at the low speed flight if the maximum of the lift coefficient is reached.

Thus the using of the high angles of attack allows the aircraft to execute the maneuvers in a smaller space during a shorter time interval. For example, maneuvers called “Pugachev’s Cobra” can be used as a defensive technique for the running out of the tail of attack.

The film tells about some important questions:

1. Aerodynamics of aeroplanes at high angles of attack.

This part tells about the main physical reason of the aircraft stability and control loss at high angle of attack, the phenomena deterioration of the aerodynamic characteristics, phenomena of the spin rotation.

In this part one is able to acquaint with main peculiarities of aircraft motion, stability and control.

3. Aircraft dynamics and control at post-stall and spin regimes.

The success of the mastering in the high angles of attack flights will depend on the achievements of science and technology in the field of aerodynamics, dynamics and control, which were reached due to the hard work of the scientists, researchers, engineers and test pilots of all countries in the world developing aircrafts.

The 70s gave the start to the mastering of the high angles of attack, when the numerical methods of analysis and computers came to the aerospace science. Everybody may to have copy of this video film. This work is supported by Russian Foundation for Basic Research (Project No. 14-07-00564).