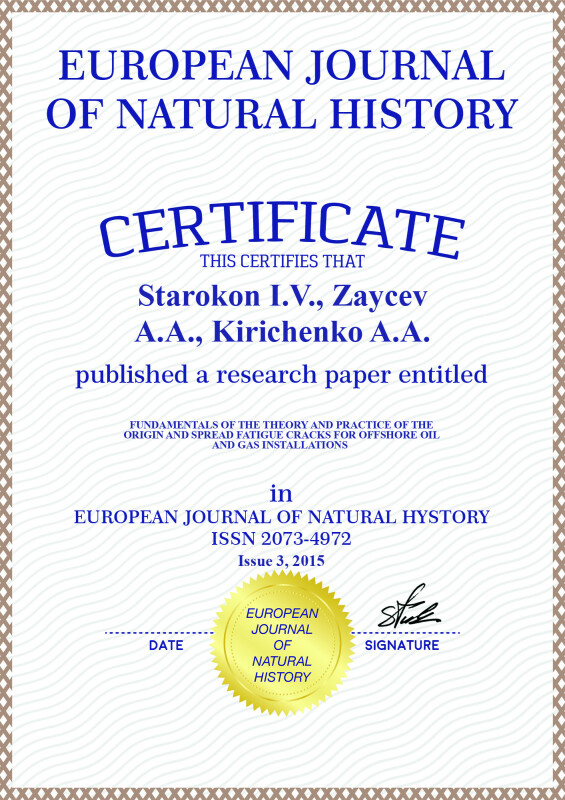 Article in PDF
1487 KB
It was made the analysis of the contemporary theories of the origin and spread of fatigue cracks. Result of this analysis showed that, there is no theory for offshore oil and gas installations, which would allow to objectively describe the nature of this phenomenon and give analytical dependence of influence of various factors on the parameters of spread of fatigue cracks in offshore conditions. The existing studies establish a link between the number of cycles of the wave load and the maximum permissible stress. The author aims to systematize the impact, affecting the development of fatigue cracks offshore oil and gas installations, and to give a conclusion on the degree of their influence on the study process of fatigue crack formation. Based on the analysis of experience of exploitation of the structures, located on the shelf of the Black sea, the author concludes that, in addition to force influence on the process of the development of fatigue cracks influenced by temperature, corrosion and vibration impacts. The article briefly describes the mechanism of this influence. As a result the conclusion is made about the fact, which of the following effects plays a key role in the processes of crack formation in the offshore oil and gas facilities in various zones (surface, underwater and in the areas of periodic wetting).
fatigue cracks
offshore oil and gas structures
thermal effects
vibration impacts
corrosion effects
variable stress

Corrosion impact. As it is known, immersion of metal in a liquid may lead to formation of cracks in it, even at zero voltage. Aggressive sea water environment, which is typical operating conditions for offshore oil and gas structures, corrodes metal. Stress, caused by various loads, leads to corrosive cracking. As shown the analyzes of “ Shelf “ institute materials for the diagnosis of fixed offshore platforms, which was made with participation of the author, structural elements found in the same areas (atmosphere, underwater and alternating wetting) have the varying degrees of corrosion damage. In the atmospheric zone there is a different degree of wear and corrosion kinds of corrosive damage. This is due to the fact that the corrosion rate is affected by the state and chemical composition of the material of construction, the intensity of solar radiation, the season, the temperature of air and water, humidity and other factors. Conducted structural analysis of the elements of the topsides showed that the average corrosion wear upper truss chords platform MSP-4 (Marine Stationary Platform), which is in operation for more than 30 years, is 10.8 %, lower apron – 14,6 %, for cross-stay – 10 % and bracing struts 9 %. On the Marine Stationary Platform MSP-5, which is in operation for more than 20 years and has established in the same area, corrosive wear of the elements of the topsides higher (average 18,9 %) than in the platform, noticed above. This example supports the assertion that the intensity of corrosion damage depends on many factors. The maximum values of corrosion wear make up 25–40 %. The average rate of corrosion elements topsides is in the range 0,04–0,13 mm / yr. Assessing the degree of damage to steel production support blocks of MSPs, it should be noted that all the elements of platforms were affected by corrosion, but the intensity of the corrosion process depends on the positions of the elements, of their design and workmanship. Fatigue cracks and stress corrosion cracking are observed for MSPs structures in general presence of a solid and pitting corrosion