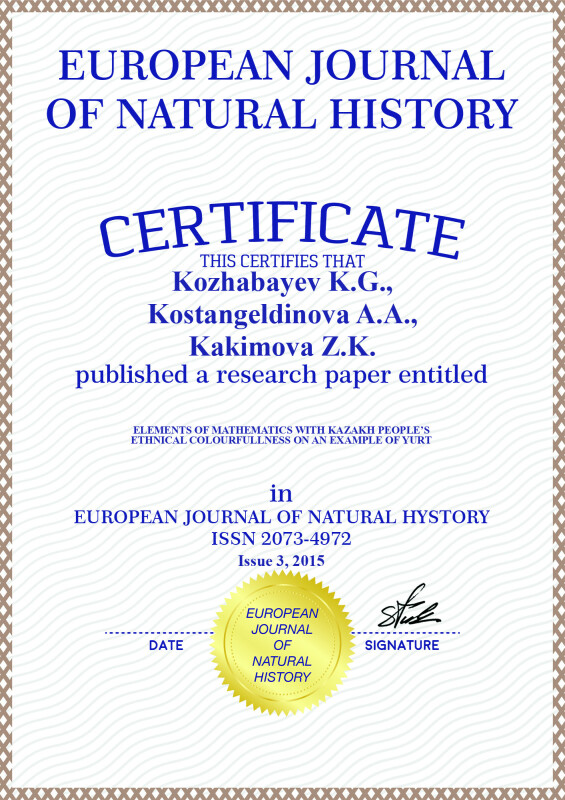 Article in PDF
1588 KB
This paper considers application of mathematical elements in socio-cultural life of Kazakh people on an example of yurt. This article refers to “Golden ratio’ proportion to define the most effective type of dwelling for life. The form of the home, parts of it facing in all directions; material from which built a house, texture, colour, quality components that make up the tent, all this is connected with the notion of ideological architecture – the keeper of family well-being of ancient Kazakhs. During the study it uses formula widely spread in architecture. It is called the coefficient of comfortable dwelling, now K value is equal to 1, and this is possible only for a sphere, and the coefficient does not depend on its radius. The larger K is, the larger cubic capacity can be obtained per unit area. As a result, it concludes that of all kinds of home comfort yurt isoperimetric ratio is close to unity and hence yurt – the most acceptable and convenient form of housing.
Kazakh yurta
golden ratio
dwelling assessment
isoperimetric ratio of comfort

At all times mathematics has been of a great support to people and their lives. People could do mathematical counting and were studying geometrical figures when they hadn’t learnt writing yet. At the time when handwriting appeared and the system of numbers came to use and soon mathematics started developing as a science. Why was mathematics necessary in ancient time? It was a great help for practical, commercial purposes, for example surveyors to measure land areas, i.e. served for many other purposes. Mathematics gradually came out of human practical needs. The game with figures and numbers was not only an instrument but end in itself. In process of mankind development there appeared new appliances of mathematics aiming to solve specific practical tasks.

Building dwellings which served as a shelter from unfavourable weather, for sleep, nurturance, storage, rest and responsible for ability, requirements to keep warm had been the most important tasks in mathematics for a long time. People had been fighting to keep warm in different ways for ages. For this purpose dwellings were deliberately reduced in space and also various covering materials were used. At the same time people faced a problem: how to provide as much space for the dwelling as possible at the lower surface and shape. The problem was that they didn’t know what dwelling shape is more comfortable for life in correlation of its space to heat loss through its surface. As a consequence the solution of this problem was related to geometrical shape of dwelling. It was proved that one of the ways to keep warmth is providing dwelling with the lower heat loss through its surface.

On this occasion dwelling space had to be reduced, but a person should have a quite amount of space to feel comfortable. At this point people arose the question of how to achieve maximum possible combination of space of dwelling at the minimum surface area through which the heat could escape. Primitive people came to the decision of this problem by actual experiments.

Kazakh people had different construction materials to cover dwellings but used to work with felt characterized as high heat-keeping material in the condition of local climate.

In the course of adaptation to environment, creation of an art and cultural community of accommodation, people came to a conclusion that creation of mathematical and architectural reasonings, geometrical forms could sometimes lead to quite unexpected results. Therefore when studying geometrical materials, as it turned out, it is important to find the subjects having a form of geometrical figures in world around to mark out their major properties.

To solve this task, you must answer the following questions: Is it possible to compare the two buildings and determine which one is better? What is the most comfortable home? The building, which is the cheapest form? How to take into account the ability to home to keep warm? Why cat in cold weather curls into a ball? Why kettle has a spherical shape? Is it related all this to the conservation of heat? The answers to all these questions are isometric theorems of geometry.

Comparing geometric shapes, ancient people understood the meaning of the existence of isometric theorems. Their meaning is as follows: on the area among all closed curves of a given length has the largest area of a circle, and of all closed surfaces of a given area of the largest volume in the world [1]. All these properties are intuitively understood the ancient people and used them in my life; Kazakhs in the choice of forms of home-yurt.

The person uses the word in the sense of the proportion of harmony and beauty. Proportions in architecture is one of the most important means of creating an artistic and aesthetic image. Practice has shown that using them can be expressed monumentality, solemnity, or, on the contrary, modesty, simplicity, naturalness. With the use of a proportional system – proportionality whole and its parts – it is possible to create a visual lightness or heaviness. The visual expression is largely provided by well chosen proportions.

The standard of beauty, get with the light hand of Leonardo da Vinci, the name “Golden ratio” (“Divine Proportion”) (Luca Pacioli) is a division of a line into two parts, where the smaller of these applies to most as great to the entire segment [2].

Due to the human eye is not any relation, but only those that are in relation to the proportion of the golden section are universal for all the phenomena of nature and art. Proportionality parts of the building, the human body, plant growth – all subject to this rule is plain.

Soviet architect I.B. Zholtovsky made the analysis of architectural monuments of ancient Greece and the Italian Renaissance. He found that there is another ratio, closely related to the golden ratio, is widely used in architecture. With its unit interval is divided into parts 0.528: 0.472.

Using proportions, axial symmetry, for centuries people tried to unite and create order, beauty and perfection of one of them, to create a masterpiece of creativity of the Kazakh people, a yurt. Manifestation of the laws of the golden ratio used in the architecture of the Kazakh yurt. The main insulation material is felt, which has a great ability to keep warmth. Kazakh yurt called Kiisa ui. It consists of two parts: the roof-shaped tapered hemispherical lower part in the form of a cylinder with a diameter of six feet and a height of about three meters yurt.

Thus, in the process of adaptation to the environment, creating artistic and cultural community of residence, nomads brought into the world a masterpiece of world civilization – Kazakh yurt. On the yurt was linked whole life Kazakhs, so she had a special place in the life of everyday. Yurt adapted to the nomadic life and a very effective tool in the process of nomadism, meets all the requirements of the nomadic way of life: mobility, can be easily disassembled and quickly installed to a new location. Yurt is striking in its perfection. For thousands of years all components carefully honed until they reached the ideal. The great French architect Le Corbusier admired completeness, versatility, interchangeability of parts of the yurt. That’s it; he is regarded as one of the prototypes of his concept of “House – a machine for living”. Simple manufacturing technology, it is very convenient and practical to use, the yurt is a socio-cultural and technologically organized model of the universe is not only a nomad in their Ethno ecological understanding, but also social and cultural terms. The main purpose of semantic yurt was to ensure the health, fertility, growth and well-being of its inhabitants.

The form of the home, part of it, facing in all directions; material from which built a house, texture, colour, quality components that make up the tent, all this is connected with the notion of ideological architecture – the keeper of family well-being of ancient Kazakhs.

In architecture, there is a formula that allows you to make an assessment of the home [3]:

Where K – isoperimetric ratio of comfort, V – volume of the dwelling, S – total surface area. Substituting the numerical values in formula, one can calculate the K value:

where K – isoperimetric coefficient of comfort, V – the volume of the dwelling, S – the area of a full surface. Having substituted numerical data in a formula, it is possible to calculate value to K:

Comparing coefficients of comfort of different types of the dwelling, we will fill in the table:

As a result, we conclude that of all kinds of home comfort yurt isoperimetric ratio is close to unity and hence yurt – the most acceptable and convenient form of housing.

It is called the coefficient of comfortable dwelling, now K value is equal to 1, and this is possible only for a sphere, and the coefficient does not depend on its radius. The larger K is, the larger cubic capacity can be obtained per unit area.

Elements of mathematical concepts were widely used among the Kazakhs in the social cultural life, in everyday life.

Analysis of the Kazakh national patterns from a geometric point of view, demonstrates in them parallel transport, central, axial, rotary and sliding symmetry. A man in his practical life using geometric concepts – symmetry in the construction of dwellings in the creation of everyday objects in the decoration of clothes, distribution of wood carving and embroidery. Many products are rich in patterns that are created with the help of symmetry [4].

Humanization of learning requires communication of mathematics teaching with cultural traditions and spiritual creativity of the people, use in teaching the elements of national culture, which have a mathematical basis. Pressure Western culture voluntary and involuntary pushes local culture and thus it dramatically affects the efficiency of education of schoolchildren and young people in general. Therefore, in the teaching of mathematics in school should be taken into account national and cultural peculiarities of the people. In our opinion, in the education world, spiritual culture is very useful to acquaint students with the “numerical mystics.” In the Kazakh people of 3, 7, 9, 30, 41 considered “sacred” (қasiettі). The number “3” means the unity and integrity of the three zhuzes (senior, middle and junior); “7” – meaning “Seven treasures” (Zheti Kazyna); “41” – one of the forty-one saint [5]. With this number is related another tradition. When, after the birth of the child takes place forty days, bathe him, pouring in 41 bowl a spoonful of water, etc. It is generally accepted among the Turkic peoples believe that God created the four elements – fire, earth, water and air.

This familiarization of students with the elements of mathematics are useful in cognitive terms and convinces them that studied in school and included in the school curriculum rules, theorems derived from knowledge of the world, tested in practice and are not given as a finished product.