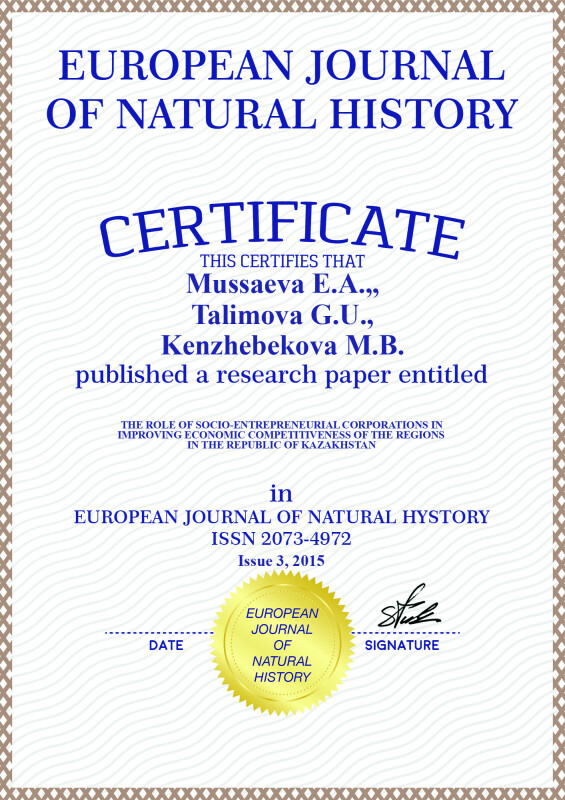 Article in PDF
1448 KB
Partnership approach between government, society and business is a secure foothold of any state’s sustainable development. The new chapter of entrepreneurship development is development of socially responsible business in Kazakhstan.
corporation
competitiveness

The head of the state made a pointed reference to its role and contribution. In particular, the main idea is to form socio-entrepreneurial corporations which would support social infrastructure in the regions where they carry out activities, not only functioning as ordinary business structures and making profit. In other words, business must be involved in projects which are connected with education and healthcare, sport and culture development, environmental protection.

Socio-entrepreneurial corporations are actually assigned as the basic mechanism to provide an economic and social leap-ahead of the state up to Kazakhstan’s inclusion into the world’s 30 Largest Economies [1].

Nowadays, there are no cooperative, mutually beneficial economic relations between regions of Kazakhstan, while cooperation between each several of them and neighbouring countries and beyond is growing rapidly.

On the one hand, it definitely works positively, but on the other it’s not always feasible for the purposes of domestic production development, because it entails extremely lap-sided development of the regions. For instance, according to the scale of innovative constituent, by WEF’s criterion, which involves the unique value – 1, only Almaty achieves this mark (the quotient is 1), followed by Mangistau region with the quotient 0,4. Rest of the regions ranks below 0,1.

Generally, programs worked out in the center, including cluster-based and regional development investigations, barely get to the regions. In this matter SECs are aimed at providing direct bilateral “center-region” connection, achieving both the routing of innovative decisions and technologies to the regions and regions’ self-development.

As opposed to developed countries with established economic and social system and sprawling infrastructure, in Kazakhstan concerns of territorial development claim an effective coordination.

As global experience confirms, socio-economic development of a state directly depends on its regions’ competitiveness. In the age of globalization state’s economic progress needs not so much production value and resource endowment, as territorial concentration of economic activity which satisfies the global standard demands. “Territorial competitiveness” refers to its capacity of getting high, constantly growing quality of life by means of increase in labor productivity and efficient use of capital. Regions which are able to meet competition use the opportunities to enter the global market acting as important elements in the system of financial, technological and cultural exchanges. The regions’ stabilization in global exchange system enables the country to win competitive positions worldwide and strengthen its geo-economic status.

Thus, summing up what has been said, SECs are aimed at improving competitiveness of regional business, ensuring organizational attributes and economic conditions for attractive investment climate and development of infrastructure for innovative activity in the region [2].

SEC is sort of a regional institute for development and might be represented as a holding company managing state assets in a specific region of the country. The conception of a national holding company managing state assets has attracted intense attention in many developing countries and is currently central at the modern stage of Kazakhstan’s progress. Basic philosophy, which guides governments’ actions, consists of gaining the guarantee that state companies and organizations which have state assets at their disposal are able to meet competition and are able to meet requirements of market economy and conduct efficient business.

In Kazakhstan the state assets management is historically based on the conception of economy which functions under conditions of budgetary funds deficit. In 1990s the government was privatizing state-owned property in order to refund the lack of budget and attract investments in loss-making public enterprises. State investments were mainly addressed to institutional reforming and building social and infrastructural assets. These processes took place in time of economic crisis and overriding need of macroeconomic stabilization.

At a later stage, according to expert opinion, with the gain in managerial experience and improving capitalization of SECs, extension and diversification of their “field of responsibility” will be possible, including the entry into regional and international markets [3].

The activity of the corporations is addressed to attraction of new projects, small and medium enterprises development and consolidation of corporation’s role.

Social and economic development of the republic is physically impossible without active involvement of private sector. Nowadays private structures shouldn’t be out of problems connected with development of the region where they carry out activities. In this respect, social responsibility of private business is not only investment of profits in social projects, but also creation and conduct of competitive business, creation of new production based on loss-making enterprises, efficient use of state-owned property. One of the key objectives of SECs was creation of effective mechanism for crisis-management specialized on rehabilitation of non-performing state and communal assets. In this context, communal assets are, most notably, infrastructure assets (public water supply, wastewater disposal, etc.). At present, according to the document prepared by the work team, this notion is defined in the following way: “SECs are steady business entities operating for the purpose of receipt of profit from goods and services production and sales”.

The purpose of SECs turned to “provision of regions’ leap-ahead by means of economic diversification, creation of effective system for corporative management, state assets and entrepreneurial initiative consolidation for socio-economic task solution”. Thus, SECs, having considerable and liquid state assets at their disposal, are able to attract long-term capital under favorable conditions for realization of regional projects. The proposed way of capitalization and highly professional management of SECs brought the possibility of attraction of foreign investors in joint regional projects which would promote advanced innovations and high-technology products introduction.

The main objective of SECs is to make money for each viable social project. For this purpose at these days the government is capitalizing SECs by means of treasury funds and sets them as domestic companies.

The conception of SECs doesn’t put the purpose of state assets recovery and, if possible, its transfer into competitive landscape. Nowadays the SECs’ objective is to become a self-sufficient active player in the market. In particular, entrepreneurs used to appeal to the government and gain the right for land appropriation in order to implement a business-project, then as now, according to the government’s idea, they will have to appeal to the SEC.

The regional economic system integrity is evident as the interdependence of production development in a region, while allocation of new industries is rated not only on return of investment, but also on its consequences in consideration of SEC’s functioning in general.

In perspective, SECs will help in improving existing social circumstances in regions by means of solving following issues:

– creation of demand for corporate goods and services on a long-term commercial basis; product promotion in domestic and foreign markets;

– intensification of connectivity between small and medium-sized business entities and large financially secure enterprises for the purpose of clusterization;

– promotion of region’s economic image in domestic and foreign markets;

– productivity improvement of small and medium entrepreneurship on the basis of clustered production development and introduction of new technologies;

– generation and financing of projects aimed at social development of the region [4].

SEC will improve social circumstances in regions by means of creating new vacancies, small entrepreneurship development, implementation of social projects, provision of rival products for the domestic market and economic development of the region in general.

As the result, SECs are of key importance for modernization of country’s economic system. SECs are big employers and growth drivers, regional “growth spurts” of national economy. That way, the government concentrates on generation and implementation of strategic and political objectives within the General course on the entry into top 30 most competitive economies in the world and creates transparently working market mechanism for the development of big domestic business, small and medium entrepreneurship, boosting employment of population and raising of living standards [5].