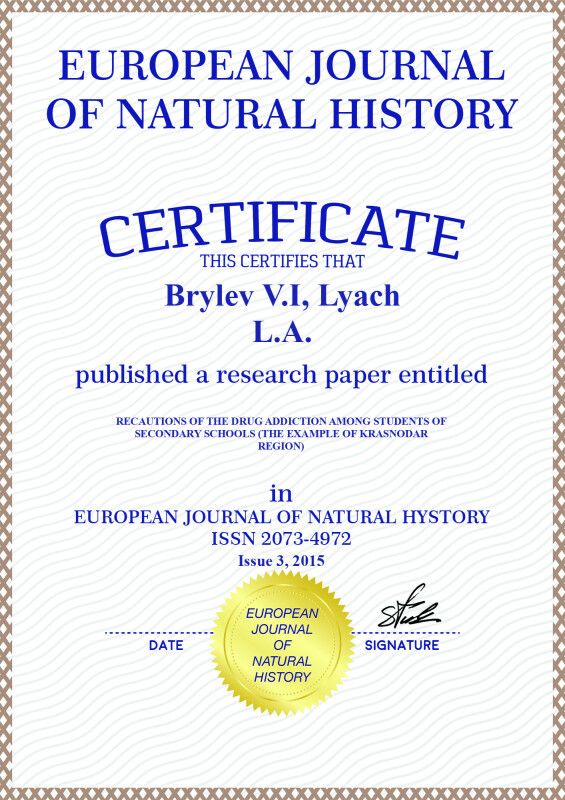 Brylev V.I 1 Lyach L.A. 1
1 Novorossiysk branch of Krasnodar University of the Ministry of the Interior of Russia

Article in PDF
1492 KB
Basing on survey of students the statements of precautions of drug addiction are given in the article.
precautions
drug addiction
students
Monitoring
drug abuse situation

The main subject of study is the organization of monitoring of drug abuse situation in Krasnodar region among minors. Purpose of study supposes supervision, fixation and analyses of primary parameters of use and illegal drug trafficking to discover their coincidence to expecting results of fight with drug crimes in definite spatio-temporal borders. Realization of continuing (5 and 10 during summer time), principal (once the year) and current (once the quarter) drug abuse monitoring is considered optimal. Project assumes discovering the impartial situation of trafficking of drug addiction among minors in Krasnodar region, comparison main empiric characteristics of non-medical drug use in the community of youth, influence of non-medical drug use among minors on queer and delinquent behaviour of minors, forming of structure and dynamics of drug crimes committed by minors.

There are results of survey of 1073 pupils from eighth to eleventh forms of comprehensive schools situated in Krasnodar region in age from 12 to 18 years old. And the results can show an inclination (presence of experience) to drug addiction, but not a real or constant use. They don’t reflect a real level of drug addiction, because facts of occasional or even regular drug use are rather latent and are hidden from close people, family members by respondents, as non-medical drug use is blamed by society and it is dealt with different forms of administrative and criminal prosecuting. Besides student don’t think that some ways of using “light” drugs (e.g.: smocking of anasha) are real drug use. That’s why a real lever of drug use by youth is higher than discovered one. Thus we can see the fall of age border of minors, who is inclined to drug use. The survey has shown that single (also accidental) drug use doesn’t lead to firm drug addiction.

These studies let us to make a conclusion, if a teenager didn’t have the experience of drug use from 14 to 16, probability coefficient of drug use would be too little for him and it would be near 0,1. Therefore it’s necessary to protect minors under 18, differentially addressing the main measures taken for the total prevention of drug addiction.

Second monitoring of drug abuse situation among pupils, where the age of drug users was defined, showed that lowering of age border of minors inclined to drug use still saved. The acquaintance with drugs has an accidental character and it’s restricted to one or several episodes for the majority of addicted in every age group, and speed of lowering drug use is rather higher than narrowing of circle its casual users with increasing the age of those who are under consideration. Also there is a very important fact that for every second who tried drugs Cannabinoid are easy to take, for every sixth – opiates. Thus personal key factor of drug addiction among youth is the interest to unusual and bitter senses, which are aroused by drug use, and the main social reasons of this are friends, street companies, where drug use has become usual group norm. Differentiated act of these and other discovered psychological and social factors defines social mechanism of determination of drug use among minors. Common coefficient of pupils’ law knowledge was 0,65 (100 % = 1).

Among the anti-criminal factors of drug addiction spreading an important role belongs to awareness and widespread effects of drug abuse. The poll showed that majority of juveniles knows about the danger of drug use. Students have also quite distinct ideas about specific consequences of drug use. Thus, active prophylactic drug stance in an informal environment of the pupils is dominant, that should be taken into account in the organization of drug abuse prevention.

According to the results of monitoring the drug situation in the Krasnodar region among schoolchildren had reached the following conclusions:

1. Conducting of regular monitoring studies of anesthesia is necessary for the establishment of a system of accumulation of subjective statistics about changes of the volume, the level structure of the anesthesia, the effectiveness of social control in the conditions of rapid social change. However, the identified level of drug abuse needs to be adjusted to a higher intensity of drug use in drug risk groups (approximately in 2 times) and manifestations of natural (unconscious) and artificial (conscious) latency of drug use in the school environment and minors in general.

2. Age drug users’ settings identified during the study allow to highlight the three main levels of early drug use among school students:

Similar options should contain and the preventive resistance model of drug abuse.

3. Structure of the narcotic drug use determinat includes the following groups of factors: personal, microstructural, social. In the first group dominant factors are “interest to unusual and poignant sensations”, “an opportunity to get away from the problems of reality, forget”, “loneliness and boredom”, “pleasure, euphoria, which cannot be obtained by other means”, “levity”. The second group is dominated by the influence of friends, street environment, “family conflicts and misunderstandings”, “and idleness and poor organization of leisure activities”.

4. Monitoring studies reveal statistical association smoking with anesthesia of teenage environment, as the abuse of tobacco is often a background of behavioral practices and promotes experimentations with drugs. Ban on tobacco and alcohol advertising seems complete justifiable. It seems righteous to conduct regular information campaigns in the media, forming aims on a healthy lifestyle. Actively counter the spread of drug use, as well as tobacco, alcoholic beverages should be drug prevention materials.

5. Structural differentiation of drug use is characterized by the following features:

a) cannabinoids (cannabis drugs) are the most extended and used as a “light” drug type among minors;

b) the consumption of “hard” drugs of opium type in the region is relatively small and has a certain distribution of the decline;

c) reduction in opiate use is replaced by the growth of cannabinoids, psychoactive substitutes (compositions based on glue “Moment”, acetone mixtures, smoking blends, etc.).

6. Social values and guidelines, the implementation of which could significantly reduce the level and extent of drug addiction among school students are constructive leisure, sports, education, employment, career prospects and a decent standard of living.

7. The problem of teenage drug use is not effectively regulated by measures of criminal and administrative law. Drug users compared with drug non-users have uncultivated sense of justice (for most of them the purchase of drugs is not an offense, much less a crime).

8. Drug users – a group of increased risk of victimization: violent crimes are often committed against them, and they are really need of legal protection, psychological and medical assistance.

9. Anesthesia of adolescents contributes to their personal immaturity, which does not allow them to fully feel the psychological support and protection of the family and relatives, to feel self-esteem, to self-overcome the problems and to find constructive solutions and to achieve success in life.

10. Strengthening of value orientations and aims currently happening among teenagers, awareness of the danger of periodic drug tasting, attitude to drug experience, and to those who gets it, becomes more and more negative. This communicative result definitely reduces the massive demand for drugs, the probability of drug debuts and re-using drugs. However, active steps to disseminate the special anti-drug literature, leaflets, participation in the work of hotlines, the provision of social and psychological assistance to drug addicts still shows a very small number of adolescents and young adults.

In order to streamline drug prevention measures is proposed:

1. To conduct an interagency meeting with the Commissioner for Human Rights on the issue of drug abuse, with particular emphasis on the measures taken to combat youth drug addiction.

2. To create with the administration of the region, Regional Interagency Research Center to monitor the drug situation, including the continuous holding of representative sample surveys (lasting – 5 and 10 year periods, the main – once a year, the current – once per quarter) for the purpose of comparison latent array production, marketing and consumption of narcotic and potent substances.

To ensure its educational and methodical, normative and technical equipment, including training and staff development center.

3. To implement a long-term preventive programs for the prevention of drug use (within the governor’s program “Antinarko”) including:

– information and education, health improvement and rehabilitation work, the provision of socio-psychological and medical assistance to drug addicts;

– prevention of drug abuse within family structures, communities of former drug addicts, medical and educational institutions, youth-aimed at securing value orientations that prevent the growth of drug demand reduction and treatment of socially dangerous consequences of drug use.

4. It should be taken into account in the development of drug prevention programs:

– age range of drug use (including its early forms);

– the general structure and hierarchy of factors of anesthesia population;

– profound defects of legal consciousness of groups of drug risk and stable position of indifference part of the population regarding the problem of addiction;

– low social significance of official entities of drug prevention (such as a school, psychological and psychotherapeutic services, organs of internal affairs units for the prevention of juvenile delinquency).

5. To create a system of valuation of scale of the drug threat in the districts in the complex providing measures of the social, economic, educational, legal, organizational and information-analytical character.

6. To develop a regional programs to reduce drug demand and supply reduction measures on them, which should be a key factor in combating with drug aggression. Implementation of programs should start with the definition of the boundaries and parameters of the drug market, taking into account the specific socio-economic conditions and regional particularities. The program should include fundamental research on the social, economic and political consequences of the drug menace in the region and the country.

7. Using the experience of other countries to establish the Institute helping the family (the center of interagency cooperation in combating with child abuse), which should consist service care, doctors, child psychologists to prevent protracted situations of domestic violence, suicide of minors, drug use, and others.