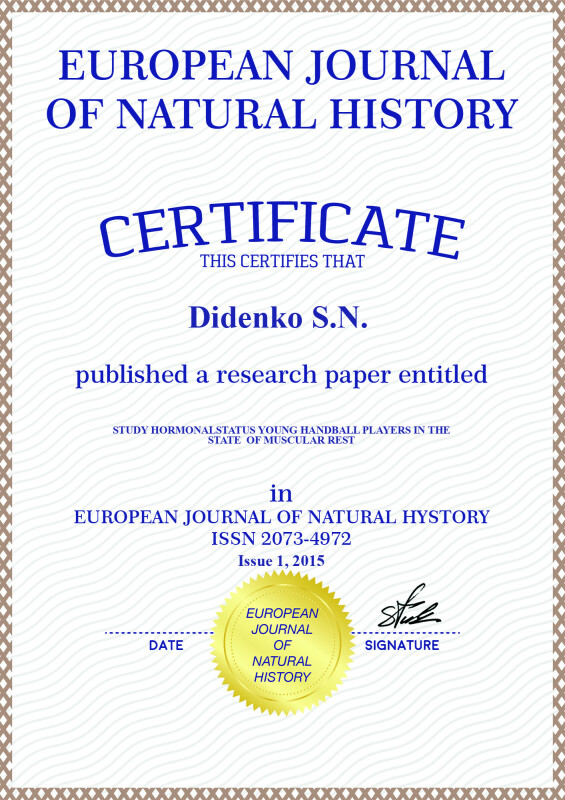 Nowadays studying hormone levels is an important elements of maintaining permanent and strict control over organisms of young sportsmen. Thus, defining hormones of suprarenal cortex makes it possible to judge on condition of adaptive metabolic processes. At the same time, it is known that saliva contains a number of biological markers that reflect impact of physical strain and stress upon vital regulative systems of an organism (Khaustova S.A., 2010). The objective of this research is to study hormonal composition of saliva at the example of hormones: testosterone, cortisol, 17αОН – progesterone among young handball players in condition of relative muscle idleness.

Observation was he;d over young male sportsmen in age of 12–13 years. The first group of the observed was formed of young sportsmen at the stage of sporting specialization (n = 23). The second group consisted of 21 young sportsmen of initial training stage. The control group of 30 people included practically healthy (taken medical observation) peers who don’t participate in sports. The research was undertaken during preparation period of a year’s training macrocycle. The research took place at the foundation of medical budget institution of additional children education city children-youth sporting school of Krasnodar

Saliva was collected with usage of SaliCap Set (system of collecting saliva samples). Definition was carried out on immune-ferment sets for quantifiable determination by Diagnostics Biochem Canada Inc, with facilitation of analyzer SANRAIS (TECAN, Switzerland). All calculations were carried out with application set STATISTICA® 6.0. As the received data shown, reliably-significant differences in testosterone contents have been revealed among sportsmen of the first group in comparison to their peers who don’t go in for sports (p < 0,05), and it can be defined as adaptive reaction to systematic physical strain. Regarding comparative analysis of cortisol and 17αОН – progesterone hormone contents in idle condition, no reliable differences have been established.