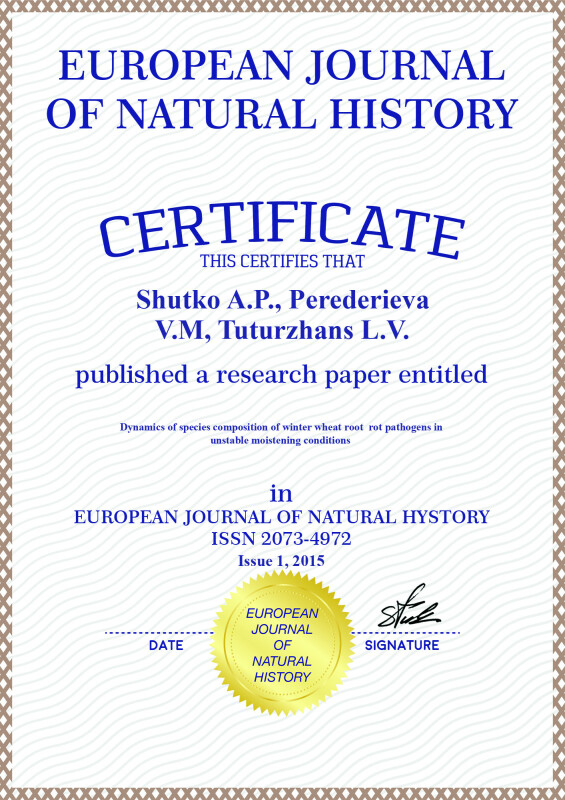 In the works of many researchers shows that the species composition of pathogens varies depending on the culture, soil and climatic conditions, variety, stages of plant growth and other factors.

Comparative analysis of the results of research, we conducted of 2005–2008 and available data in the literature (Gavrilov, 1970; Hajsam Isber, 1992) shows that during 20 years (1988–2008) composition of root rot pathogens in the area of an unstable moistening of Stavropol Territory underwent significant changes due to changes in farming systems and increasing aridity. If in 1967–1970 in pathogenic complex structure prevailed Gaeumannomyces graminis and fungi of genus Fusarium, в 1988–1990 – Gaeumannomyces graminis and Pseudocercosporella herpotrichoides, then in 2005–2008 leading position occupied fungi of genus Fusarium (more than 45 %) и Bipolaris.

S. Retman, T. Kislykh (http://www.zerno-ua.com) note that in recent decades there was a significant transformation agrobiocenoses due to climate change, the forms of farming and cropping technology. This resulted to significant changes in a complex of pathogens in a forest-steppe of Ukraine. The tendency to reduce the number of species of fungi pathogens of Fusarium head blight of winter wheat. The frequency of isolation of the usual pathogens F. graminearum and F. culmorum gradually decreases, but a dominant position on the go representatives section Sporotrichiella – fungi that can grow in dry conditions and synthesize dangerous trichothecene mycotoxins (http://www.zerno-ua.com).

Species of the genus Fusarium (the main pathogens), isolated from plants
of winter wheat in the area of an unstable moistening

According to G.S. Muromtsev and I.I. Chernyaeva (1988), prevalence of Fusarium infection can be attributed regular use of mineral, first, nitrogen fertilizers, without organic fertilizers, resulting tapered diversity microflora. Biocoenosis phytopathogenic fungi (especially fungi of genus Fusarium) begin to dominate, increased soil phytotoxicity while reducing its suppressive. Of 2000–2009 in conditions of the Stavropol Territory mineral fertilizers has increased steadily and reached 118 thousand tonnes of active ingredient which is 2,6 times higher than to 1996–2000, when this indicator was minimal over the past 50–60 years ago. In this case, organic fertilizers also increased by 4,9 times and amounted to 4,9 million tons, but it was realized through the use of straw.

A.Y. Egoshin, O.G. Marina-Chermnykh, G.S. Marin (2008) note that the use of straw cutting in the rotation (vegetable organic substance – detritus) scatter at harvest grain combines with grinders, especially in combination with biologics, in conditions of Mari El Republic provides soil saprophytic recycling, improves the phytosanitary condition of topsoil and increases productivity of crops.

In arid agro-ecological conditions of the Stavropol Territory there is a problem of straw early decomposition, the straw becomes an additional source of infection common root rot, mainly Fusarium etiology, which was confirmed by the branch of the State Organization «Russian Agricultural Center» for the Stavropol Territory (Stamo, Kuznetsova, 2012).

Furthermore, А.N. Zemlyanov, N.G. Gursky, V.А. Zemlyanov (2011) note that the lack of nitrogen and moisture decomposition of straw residues occurs to form the phenolic compounds, which are inhibitors of root growth of winter wheat.

Annual incorporation of large amounts of wheat straw into the soil, in our opinion, can be considered as one of the factors, which explains the significant reduction in the frequency of occurrence Gaeumannomyces graminis root rot (4 times in comparison with the second half of the ХХ century). N.I. Bogachuk, G.S. Marin, N.N. Apaev, A.M. Yamalieva (2008) indicate that Gaeumannomyces graminis can suppress the introduction of straw with a high ratio C:N (barley, wheat, corn), while Bipolaris sorokiniana dies more easily when making straw with a low ratio C:N (straw soybean, alfalfa and other legumes).

So, the formation of a consortium of various kinds of pathogenic microorganisms and their time dynamics assume constant monitoring species composition of pathogens, necessary for the development of effective measures to limit their damage.

The work is submitted to the International Scientific Conference “Problems of ecological monitoring”, Italy (Rome), April, 10–17, 2015, came to the editorial office оn 09.02.2015.