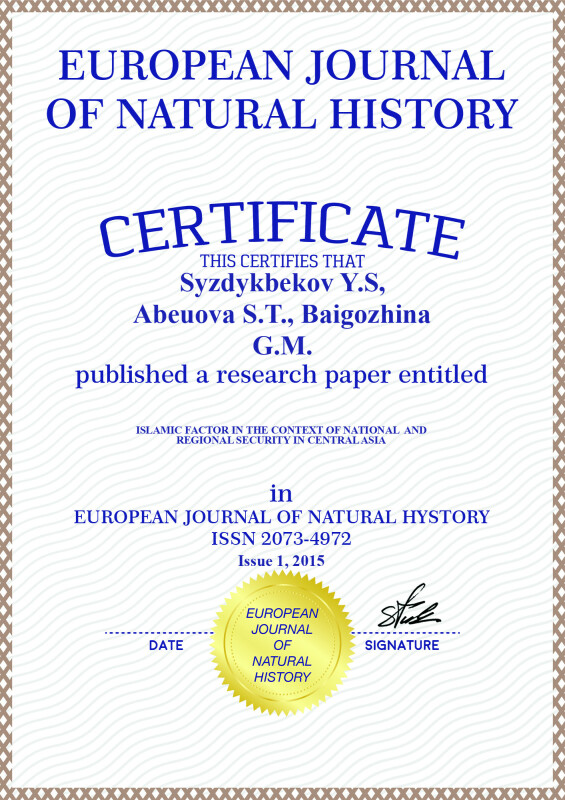 Article in PDF
183 KB
The question of interrelations between state and religion in Central Asia is complex. Its study reveals problem areas, which require comprehensive analysis. In the context of the dialogue between state and religion can highlight important problems of national security in the Central Asian republics such as Kazakhstan, Uzbekistan, Kyrgyzstan, Turkmenistan and Tajikistan. Islam in these countries will confess mainly by representatives of the indigenous population. However, the degree of religiosity of the society and the politicization of Islam in them are different.

Since 1991 the Central Asian republics are in independent and sovereign development, which faced with not only political and social-economic problems but also with ideological nature [1]. Of course, the policy of the state in its relation to religion is in the context of internal policy. Meanwhile, there are many external actors and their agents.

In Kazakhstan, the adherents of Islam in the majority are not Orthodox Muslims, although over time the position of Islam in society is increasing. Government policy becomes more coordinated in such situation. There are many reasons for a coordinated policy of state in relation to Islam. One of the reasons is the manifestation of national security threats. Kazakhstan is a multiconfessional state and religious contradictions may adversely affect on international relations and foreign policy of the state.

The government of Kazakhstan has taken a number of measures on the prevention of religious extremism within the country and at the level of multilateral diplomacy [2]. N. Nazarbayev initiated creation of a platform for dialogue between representatives of different religions. The Congress of spiritual leaders of world and traditional religions are held since 2003 in Astana regularly at least 1 time in 3 years.

State agencies establish control over religious organizations, which operate on the territory of Kazakhstan. The government also pays attention on official religious associations which have pro-government orientation, for example on the Spiritual administration of Muslims of Kazakhstan (SAMK). Patronage the SAMK from the state determines the activities of Muslim organizations under the auspices of the SAMK. This explains joint measures to prevent activities of extremist organizations.

There is another situation in Uzbekistan. Since the middle ages Uzbekistan was a center of Islamic culture in Central Asia, where Bukhara, Samarkand and Khiva were centers of the Islamic faith. Islam in Uzbekistan more politicized, because in addition to external factors of Islamization of society, there are also internal factors.

Social causes of politicization of Islam and the radical Islamization of the population are hiding in a systemic crisis, the challenges of economic transformation of society, which leads in frustration of the population in their government. The Islamic factor has become one of the defining moments not only in the life of society, but an instrument in the struggle for power [3].

The government of Uzbekistan held events that changed the position of state power in relations with religion: the spiritual institutions of the republic are taken under the control; clergy joined the ranks of state authorities for religious affairs on the rights of civil servants; it was limited influence and the role of religious organizations legal framework. The President of Uzbekistan I. Karimov took an uncompromising stance in relation to “political Islam”.

In Kyrgyzstan tribalism and clan structure bloomed in government during A. Akayev’s reign. The population of outlying areas remained without attention of center. A. Akayev’s regime brought the country to the acute socio-economic crisis, where the idea of creating Islamic Caliphate became the alternative to survival. This led to the fight of Islamic radicals, among which, by the way, the majority of Uzbeks, with the official authorities in Batkent in 1999–2000. The idea of creating Turphan (or Turkestan) Caliphate on the territories of Kyrgyzstan, Uzbekistan and southern Kazakhstan has endangered national and regional security. Despite the fact that managed to avoid such scenario, the security threat from Islamists is still saved. Social-economic tensions, political instability, frequent changes of leadership in Kyrgyzstan contribute these threats.

In Tajikistan, the evolution of relations between state and Islamic radical movements took place in several stages. The first stage was characterized by the confrontation between supporters of “pure” Islam and traditional Islam. The representatives of “pure” Islam position themselves as fighters for the purification of Islam from different innovations. The front of moderate Muslims was formed, whose political ambitions were linked with the reorganization of the state and the legalization of the activities of some religious organizations. The leading force of moderate Muslims became “Islamic Renaissance party of Tajikistan (IRPT)”. This party tried to participate in the political process legally as a parliamentary party [4].

The second stage of relations between the government and Islamic organizations related to Civil war 1992–1997. Islam has become a mobilizing force against the official authorities. It was a struggle between less developed Islamic South against the modernized Uzbek and Russian North. It showed how the social-economic conflicts easily find a religious overtone.

The third stage is characterized by the emergence of oppositional Islamist movements not only in relation to the E. Rakhmonov’s regime, but also in relation to IRPT. In connection with this leaders were carried out some changes in internal policy: the transition from a balance of interests of various political forces to the rigid authoritarian system; modification of the General concept of governance, improved efficiency of the management of public institutions by the state.

Finally, in Turkmenistan, religious situation is quite different. Despite the vicinity of the Islamic Republic of Iran, where religious institutions are orthodox in nature, Turkmenistan is not positioning itself as an Islamic
state [6]. This is due to the difference in the religion of the population in the countries: Iran – Shiite, Turkmens are Sunni.

The basis of the political regime in Turkmenistan is strong authoritarian government of President since the days of S. Niyazov, and close internal policy too. This regime does not allow the activities of radical Islamic movements, undermining the authority of the President or opposing him.

There are no any activities of extremist Islamic organizations in such conditions. Firstly, the Muslims of Turkmenistan sensitive to the manifestations of any missionary work in their surroundings. This makes the interaction of state authorities and traditional structures of Islam successful in combating religious extremism. Secondly, the Muslim clergy is subject of security agencies’ attention.

Despite the change of leadership after the death of S. Niyazov, significant changes in the internal policy of Turkmenistan are not expected. Isolationist neutrality is saved which provides support for traditional moral values.

Adopted in recent years, strict anti-Islamic campaign became a characteristic phenomenon in Uzbekistan and Tajikistan. In Turkmenistan there is a strict state control over religious activities. The same policy recently practiced in most of the Central Asian states. For example, in Kazakhstan in 2011 the law on religion was revised, which caused the disapproval of the “democratic” West and followers of non-traditional religions. The weakest link in the face of religious extremism currently remains Kyrgyzstan. Largely this is due to the unstable political situation and socio-economic instability in the country.

Thus, the dialogue between state authorities and religious organizations in the Central Asian republics annually is becoming popular, both in the context of the political and socio-cultural development, and in the context of foreign policy. It is also due to the increasing incidence of recruitment of young Muslims to participate in wars in Afghanistan, Iraq and Syria [7]. It should be noted, that only a strong authoritarian regime and building a police state now allows us to constrain the activities of extremist organizations on the Central Asian territories.