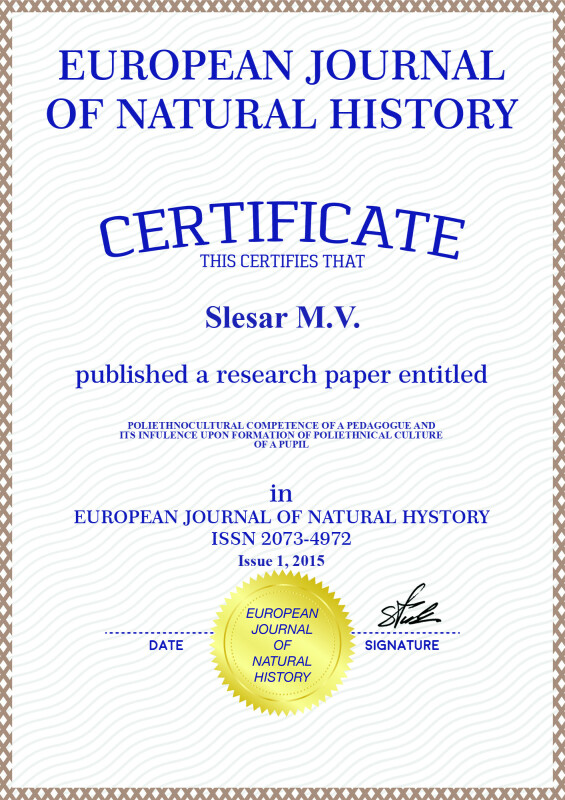 Humanistic orientation of human civilization development changes our ideas on objectives of education that broadcasts and unites values of general human and national cultures.

Modern situation on planet Earth that is described by continuous ethnical wars, shows us that the basic values are peace and consent. Transiting it to the growing generation is the most important problem of educational institutions.

Analysis f modern researches on this problem has led us to a conclusion that the foundation of reserving peace and consent in a multinational country, poliethnical world is poliethnical culture of the growing generation.

In regard to pedagogic phenomenons we have suggested the following definition of poliethnical culture of a pupil: it is a system-logical education that includes knowledge, skills, value orientations and personal qualities that provide for interethnical integration of person with preservation of its ethnocultural originality for efficient life in a multinational environment [1, p. 104].

From our point of view, process of forming poliethnical culture among pupils can be efficient in terms of systematic and targeted work of a pedagogue with a condition that their professional position will influence this process constructively.

Position of a pedagogue is a system of their intellectually-willpower and emotionally-evaluating attitude towards the world [2, p. 81]. According to different definitions that are, however, similar in their message, professional position is one’s attitude towards professional activity, pedagogic work as the basic meaning of life, attitude towards children, based upon humanistic principles. An important characteristic of a pedagogue’s professional position, according to modern researchers, is a new pedagogic thinking, thinking from the position of pupil as an object of educational process, directed towards their development, interests, and spiritual needs, it, from our point of view, provides for a successful formation of poliethnical culture of a pupil.

In this situation poliethnical culture of a teacher obtains a special significance, as the basic component of pedagogic competence. The foundation of a pedagogue’s professional competence, including its poliethnical type, is knowledge. Especially significant becomes knowledge of a personal example, life experience of great men that found reflection in their masterpieces and ideas.

The content of poliethnical competence includes realization of new concept of history that rejects philosophy of war, the foundation of which lies in internationality of history and understanding of the following important fact: “when history registers only conflicts, in future history and minds of generations it is reflected by pain for trampled dignity and freedom. If such feelings are “cherished”, constantly recalled and being reminded of, they formulate, fix, and are reproduced in new conflicts, debates, rejection of “aliens”, “enemies”, and provoke wars again “[3, p. 209].

Knowledge of ethnology, ethnopolitics of our country – these are important components of sensual component in poliethnocultural competence of a pedagogue.

Motivation-technological and diagnostic-corrective component must, from our point of view, enrich the content, and together they form poliethnocultural competence of a pedagogue that reflects in:

– Realization of poliethnocultural features of pupils, constant conflict between ideals and reality.

– Knowledge and consideration of psychological features of apprehension and personal behavior, defined by ethnocultural belonging of a person.

– Ability to create motivational environment that will form skills, required for an efficient
participation in social life for which ethnical diversity is typical.

– Prediction, prevention, and correction of behavior among pupils and skill to solve possible ethnical conflicts.

– Ability to establish poliethnocultural direction of educational process, integrate poliethnical content into all given subjects during the whole period of education.

– Change in school culture in such degree that is necessary to reflect cultures and cognitive styles of children who belong to different ethnical groups [4, p. 257].

The basis of a pedagogue’s professional position is knowledge of general didactic principles as components of poliethnocultural competence. Principles of humanism, adaptability, consciousness, psychological comfort are especially important in process of forming poliethnical culture.

The work is submitted to the International Scientific Conference “Content and technology management education in the context of competence-based approach”, UAE, March, 3–10, 2015, came to the editorial office оn 25.02.2015.