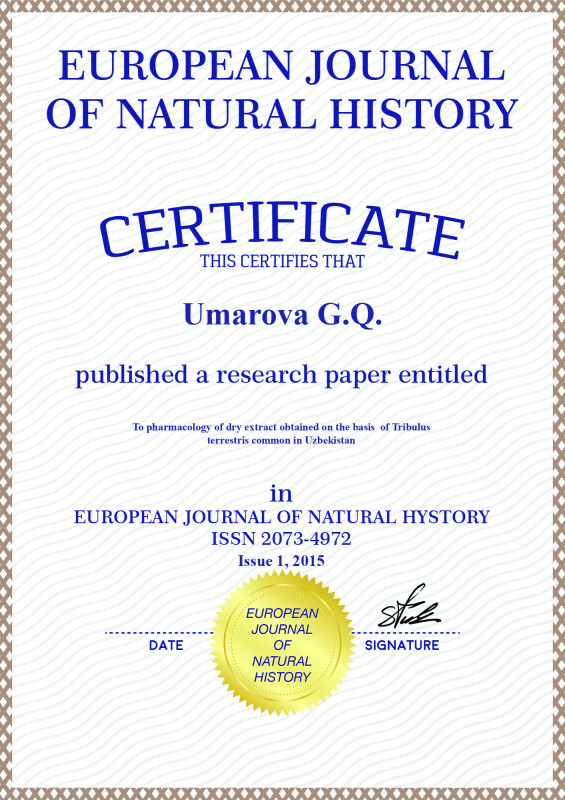 Article in PDF
186 KB
Medicinal plants are widely used in folk and officinal medicine. Herb TribulusTerrestris is known since ancient times and it has successfully been used in Eastern Europe, China, India and the Central Asian Republics for the treatment of general fatigue, increase of the overall resistance. The purpose of this work is to obtain a dry extract of aerial parts Tribulusterrestris (Tribulusterrestris) of local flora and compare it with the pharmacological activity of the substance and medicinal form of tribestan tablets.

In Bulgaria, Tribulusterrestris (Tribulusterrestris L. Zygophilaceae) are used as medicinal plants for the preparation “Tribestan” which restores gonadotropin deficiency in the treatment of men and women. (1). In Pakistan it is included in the “Verona” drug. The plant contains steroidal saponins – Tribusponin, diosgenin and some saponins of furostane type of structure (4). Preparation under stressful conditions stimulates protein synthesis in the liver, heart and kidneys (2). Plant is rich in water-soluble polysaccharides, recently revealed immunomodulatory effect which is inherent in these chemical compounds. In the paper of Iskenderova G.B. (3) is shown that Tribusponinis excreted mainly via the kidneys in the urine.

From herbs Tribulus Terrestris, collected during flowering and fruiting in the vicinity of Tashkent region by alcohol-water extraction was obtained dry extract. The extract is pale brown powder easily soluble in water. Substance of Tribestan drug and tabletsof Sopharma PLC (Bulgaria) production were obtained from the pharmacy network of the city. Determination of cute toxicity of the plant dry extract selected from the studied materials, and we called shareware “Tribulus extract” as well as substances and tablets Tribestan performed on white mice of both sexes weighing
18–22 g mice of each dose of test substance was administered as a single oral aqueous solutions atraumatic probe. 6 animals per group heads was administered at doses of 1000, 2000, 5000 10000 mg/kg as 5 to 25 % aqueous slurry. Monitoring was conducted for 14 days. By visual observation took into account the general behavior, coat color, condition of mucous membranes, respiratory rate, heart rate, frequency of defecation, activity of eating food and animal death. Mid-lethal dose of tested substances were calculated by the method of Litchfield and Wilcoxon (6).

Inflammatory response is the primary and basic syndrome for all pathological conditions. Effect of Tribulus extract, substance and tablets of Tribestan preparation on aseptic edema was studied in experiments on white mice. Study of the antiin-flammatory activity of the tested compounds was performed as described in “Guidelines” (7) for the formaline model of paw edema in mice. Experiments were conducted on 32 male and female mice weighing 20–22 g divided into 4 groups of 8 animals each.

Tested samples of Tribulusextract, substances and tablets of Tribulusas aqueous solutions were administered orally at a dose of 150 mg/kg two times a day before the injection of formaline and 1 hour before killing the mice. Intramuscular injection of 0,1 ml of 2,5 % formaline solution was produced in the right hind paw left foot was control. 14 hours after the injection of formaline produced both legs amputated. Mass of tabs was determined by gravimetric method. Anti-inflammatory effect was calculated as described in the methodological recommendations (4). The results were processed by the method of variation statistics calculation of Students t test (7).

Oxygenation of the body has a rather large space in pathological states in particular in inflammatory reactions. Was investigated the effect of Tribulus extract, substance and tablets of Tribestan preparation on toxic action of tissue poison – sodium nitroprusside and hemolytic – sodium nitrite in mice. Antihypoxic activity was studied in laboratory mice nonlinear male (10 mice in each group). Formulations were administered to animals in a dose of 150 mg/kg.

Acute hematic hypoxia simulated on 30 mice – male. The tested substance was administered to mice of the experimental group, all animals inside the probe, to the mice of the control group injected solvent – water. Then 30 minutes after the drugs were administered, intraperitoneally injected sodium nitrite solution
at 300 mg/kg. Within a few minutes after the injection of the toxin in animals observed the development of general weakness, shortness of breath, convulsions leading to death of the mice. Evaluated the longevity and viability of animals receiving the tested drugs.

Acute condition of histotoxic hypoxia was simulated by 40 male mice (10 animals in each group). 40 min after administration of the tested substance solution was injected intraperitoneally at a dose of sodium nitroprusside 20 mg/kg. In animals observed the development of general weakness, inactivity, dyspnea, and seizures. Lifespan of the animals was evaluated compared with the control.

The results obtained are processed using the method of variation statistics (Belenky M.L, 1963).

The studies found that tribulus extract, substance and Tribestan tablets in doses tested did not significantly alter the behavior of mice, the animals were active, ate food, mucous external changes, skin and hair were not observed. During the monitoring period there were not the dead animals (Table 1). The results show that the obtained extract of local plant Tribulusterrestris is practically non-toxic formulation in accordance with the classification of substances (7), and in terms of toxicity it is bioequivalent to originating in Bulgaria substances and Tribestantablets.

Investigation of the effect of tested compounds on the course of inflammation showed that the formaline injection to mice in the control group resulted in an increase in weight of the affected paw up to 84,0 % compared with healthy. Prophylactic-therapeutic effects of tested drugs has led to a significant weakening of edematous action of formaline.

It was established that the compared formulations in tested have a reliable dose anti-inflammatory activity (Table 2).

Note. * – significance of differences at P < 0,05 compared with control.

From the data in the table can be seen that, Tribulus extract reduces swelling action of phlogogenic agent formaline up
to 39,2 %. Activity of Tribestan preparationsubstance and Tribestan tablets was slightly less than the Tribulusextract and was 35,7 and 36,6 %, respectively. The obtained results by the action on the mice paw edema of Tribulusextract show the anti-inflammatory activity that is not inferior to Tribestan preparation of Spofa production, Bulgaria. In conclusion of these series of experiments it should be noted that the dry extract obtained on the basis of the local flora Tribulusterrestris is a potential raw material for the preparation of similar drugs Tribestan imported from abroad.

To clarify the actions of the processes of oxygenation of the organism was studied the effect on the hypoxia models. Oxygen plays a key role in supplying energy to the cells and all the processes occurring in the body. At various conditions or diseases may lack or deficiency of oxygen, i.e. hypoxia, which leads to disruption of the functioning of the body and structural damage of cells.

Investigation of drugs in the course of hypoxia is one of the main indicators of adaptogenic action of pharmacological substances. Hypoxia is a key element of most pathogenic diseases which may be both primary cells due to insufficient supply of oxygen, or secondary, just due to the death of certain cells participating in oxygen transport chain.

Effect of drugs on the lifespan of mice histotoxic hypoxia (M ± m, n = 10)

Hypoxia caused by sodium nitroprusside intoxication, characterized by lesions of the respiratory chain of oxygen transport in the energy chain mitochondrial enzymes cells. As mentioned above, the death of the animals comes from shortness of breath, blue faces, pale ears, i.e. against the background of an explicit hypoxia for 682,0 ± 30,5 s (Table 3)

Prior administration of the tested drugs withdrew toxic effect of sodium nitroprusside, which indicates a valid antihypoxic effect of the drug on the level of body cells, probably due to activation of the mitochondrial enzyme unit cells. In the second model of hypoxia in case of poisoning mice with sodium nitrite lifespan of mice treated with the analyzed extract Tribulus and Tribestan was longer than control up to 48,5 and 20,8 %, respectively. Comparative study on the processes of oxygenation products indicates to the presence of antihypoxic action in both cases in hematic hypoxia. In the case of histotoxichypoxia drug did not significantly alter the toxic action of tissue poison.

Comparison of the drug effect in hematic and histotoxic hypoxia indicates its selective effect on the blood oxygen-transporting function and less expressed effect on the level of the liver tissue.

In conclusion, pharmacological studies conducted it should be noted that tribulus extract obtained on the basis of the above-ground parts of Tribulusterrestris common in Uzbekistan is almost a nontoxic substance like substance and tablets of Tribestan produced by Spofa, Bulgaria. Tribulus extract has characteristic inflammatory and antihypoxic action. Studied extract is a potential raw material for the preparation of similar drugs Tribestan imported
from abroad.