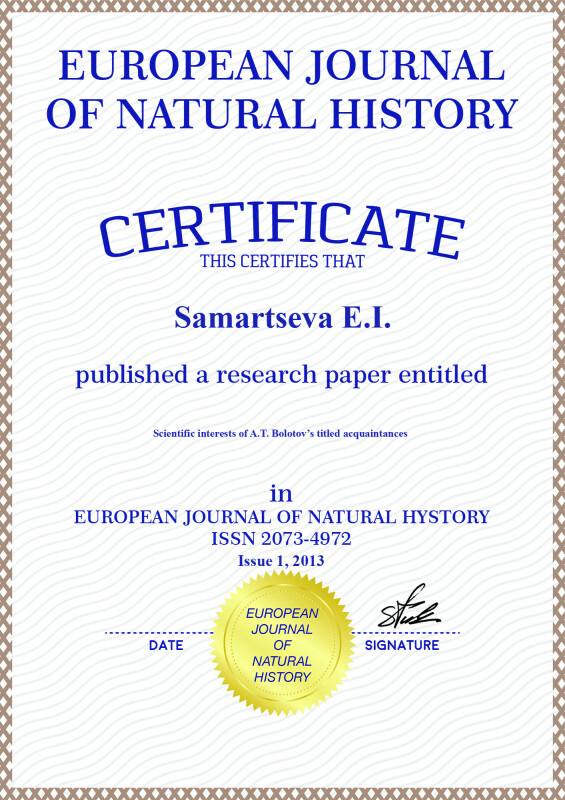 Based on a little-known historical source of the XVIII century: «The Life and Adventures of Andrey Bolotov, Written by himself for his Descendants», the article tells about some representatives of the princely and count families, who revealed their interest towards A.T. Bolotov’s works.

The biography of the well-known Russian scientist, writer, and founder of the Russian agricultural science – Аndrey Тimofeevich Bolotov (1738–1833) is very-well known. Apart from four thousand of his scientific works, there exist plays, verse, paintings, and architectural designs. With every new line one can tell about new talents of Andrey Timofeevich in Botany, Mineralogy, Physics, Design, etc. And it is natural that his quick mind and ability to arouse interest in the interlocutor draw to him the attention of various representatives of different communities and estates. Many of his neighbors-friends, as well as A.T. Bolotov’s peasants, were literally ‘infected’ with his research activity. In his extensive work published by the descendants ‘The Life and Adventures of Andrey Bolotov, Written by himself for his Descendants’ (In 4 volumes, – SPb., Publishing House of V. Golovin. 1738–1793: V.1. parts I–VII: 1738–1760. – 1870. – 1017 pp.; V.2. parts VIII–XIV: 1760–1771. – 1871. – 1120 pp.; V.3. parts XV–XXI: 1771–1784. – 1872. – 1244 pp.; V.4. parts .XXII–XXIX:1784–1795. – 1873. –1330 pp.) – the author dwelled upon many of the events which are of interest to our contemporaries. In particular, the issue of some certain cognitive interest from A.T. Bolotov’s titled friends is not very-well studied today. Now we are going to address these obscure pages of our history, which found their place in the book of A.T. Bolotov’s Memoirs. We do not claim to cover the whole issue, but shall dwell upon some of the examples.

One of the richest manufacturers of Russia in the second half of the XVIII century was Demidov Nikita Akinfievich – councilor of state, member of the Academy of Arts and Free Economic Society. He got interested in A.T. Bolotov’s works and wrote letters to him. In connection to this A.T. Bolotov wrote in his ‘Notes’: «Among my many correspondents one particularly attracted my attention, who wrote to me at first under the name of ‘not a Chinese, but a Russian noble’, but later I learnt that he was our glorious rich man Nikita Akinfievich Demidov, with whom I later got acquainted and was very much pleased with his friendliness» (1779)[1]. When in Moscow in the Autumn of 1779, А.Т. Bolotov decided to meet N.А. Demidov: «...so rode I to our glorious rich man of that time Nikita Akinfievich Demidov, who lived in the German Suburb, the brother of well-known and glorious fidget Pron’ka Demidov». «He did not let me go without dinner, and we spent the whole morning continuously talking to each other about different things...». But still he made an impression of – «a very simple man…, in whom even behind the gold you could see all the roughness of his base origin...». Nevertheless, А.Т. Bolotov got a real pleasure «at looking through his wonderful pictures and jewelries and many other rarities», he also paid proper attention to «the wonderful garden»[2]. In the winter of 1782 Аndrey Тimofeevich organized an excursion to the «natural den» of N.А. Demidov for his wife, children and nieces: they were especially impressed by the «Chinese den» and «little American birds…»[3].

А.Т. Bolotov also got letters from Prince Scherbatov Ivan Petrovich. Describing the events of the summer of 1781, А.Т. Bolotov wrote: «...not long ago I had a lot of correspondence concerning the publication of my journal with one of my correspondents from Belev, the old Prince Scherbatov, Ivan Petrovich. ... and he loved me a lot for my compositions, and sent to me more then others, even the whole notebooks, filled with his notes...» Unfortunately, «because of the awkward style», А.Т. Bolotov had to «translate from Russian into Russian»[4].

A great role in the life of А.Т. Bolotov was played by Nartov Andrey Andreevich – one of the founders of the Free Economic Society, its first secretary, and later – its president (in «Notes» he is addressed as «Mr. Nartov» only). In 1768 А.Т. Bolotov for the first time received the letters from A.A. Nartov as the secretary of the FES, approving his scientific articles: «…they definitely should be published»[5]. In 1773 one of the letters from «the secretary of the Society Mr. Nartov» read (according to А.Т. Bolotov): «…as far as he, according to his position, has to correspond with all those members who are absent, concerning the economic issues, he asks me to start correspondence with him from now on»[6]. It is worth paying attention to the fact that this correspondence with A.A. Nartov became a turning point in А.Т. Bolotov’s career: «on the 5th of March (1773 – Е.S.) all my soul was uneasy due to the letter I by chance received from St.-Petersburg from Mr. Nartov, the secretary of the Economic Society. This person, whom I do not know, but who loved me by correspondence, informed me, that he had an occasion to recommend me to Prince Sergey Vasilievich Gagarin, senator and holder, and member of our Society, who also loved me by correspondence, only after reading some of my work». S.V. Gagarinn needed «help in surveying over the regions, trusted to him by the Empress, so he will get me a position and proper payment from the state». As А.Т. Bolotov concluded: «…this day was very much remembered among the days of my life»[7].

Among common scientific interests of the correspondents was Geology. In one of the letters А.А. Nartov thanks for the stone which he received for his collection «trochitis, or wheel stone, which is very rare in the nature». He sent Leman’s ‘Mineralogy’ to А.Т. Bolotov as a present, «thus urging me even more to collecting rarities»[8].