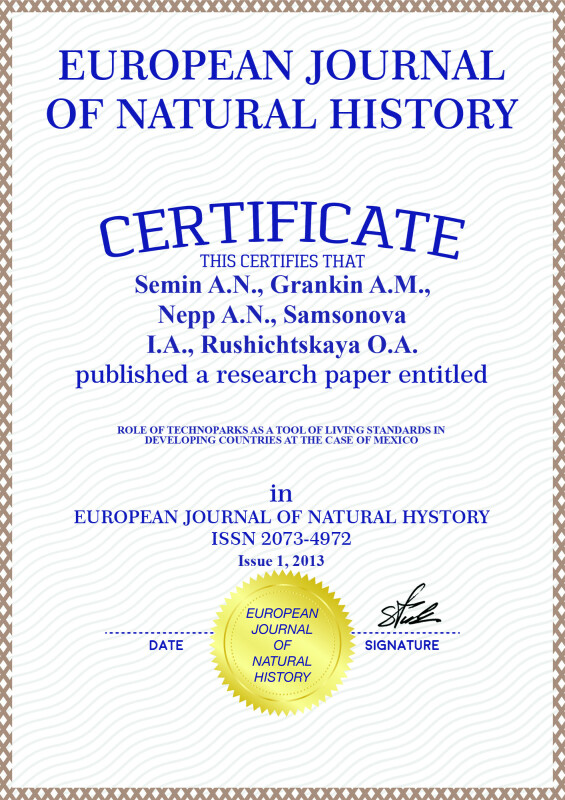 Technoparks are one of the important tools in developing economy in modern world. They are actively used to economic development by such countries as the USA and China that occupy leading positions in the World economy.

When Russia enters WTO, tools of economic development become more and more significant. Mexico, a country that is involved into North American agreement on free trade and has similar features with resource-dependent economy of Russia, can serve as an example in this problem.

The subject of the research that served as a ground for this article, were factors of life level and economic growth that can be influenced with tools of economic development – technoparks.

A number of scientists define technoparks’ efficiency according to the following indexes:

– Improvement in life quality and welfare of citizens due to formation of social infrastructure, creation of work positions, and, therefore, increase in wages due to emergence of high-qualified specialists and technologies that create a consumption potential of a country [1, 7].

For example, Russian economic researchers consider a positive effect of modernization of Russian enterprises for increase in competitiveness of national producers that can lead to an increase in welfare and life quality of citizens [6, 8].

In 1955 a concept of increasing consumption was realized. It was introduced by Viktor Lebov in the USA and aimed to make consumption a way of life. Later, economies of many countries adjusted to this economic idea that stays actual nowadays [1]. Thus, we can formulate the general purpose of an economy – an effective satisfaction of unsatisfied needs. It leads to a necessity of studying consumption and life quality of people as a factor that must be supported by economic activity and its components.

Scientists outline a number of factors that influence a quality of life. All these factors are used according to a research objective. Those factors of quality of life that cross factors of economic growth have been selected for the further analysis [1, 2]:

– education (as a factor of labour productivity);

– state debt (as a factor that influences future income of a country);

– general consumption (as a factor of increase in economic growth);

– distribution of income among working population (through coefficient of Genie);

The urgency of economic growth is described in a work of McCOnell and Brue «Economics» [1]. In it the authors indicate a direct dependence of life quality of people and economic growth of a country. Solving problems economically-outdated countries the authors link to economic growth as well. However, specifics of outdated countries consist in a number of factors, such as immigration of educated population, growth in birth rate that out runs economic growth. Low education level, poor man’s mentality, etc. lead to numerous problems that can zero an effect of economic growth. Therefore, developing countries see a solution in increase in economic growth rate with creation of free-trade areas and attraction of foreign investments [10]. This position is reflected in the Declaration of millennium of UN and is implemented in practice through organization of free trade areas, such as WTO and North American trade agreement with participation of economically-outdated countries. Besides, scientists point out currency risks [9] and emergence of state debt due to ineffective use of investments. In case of Mexico they are correct about the part of currency risks, since recessions of 1980, 1994, and 2007-2008 had a terrible effect due to instability of peso [5].

When it comes to a state debt, when we study Mexico, we can claim that a risk of state debt is not real for this country, as during the period of 1993-2010 it grew by 70 billion USD, and general consumption level grew by 735 billion USD during the same period [4].

Index Ginie in the USA is lower than in Mexico [3,4], therefore, we can conclude that consumer potential in the USA is significantly more attractive for producers of both countries.

According to the data of international organizations of labour [3], the lowest unemployment level in Mexico is registered among low-educated and uneducated people. An immigration of educated people to the USA is registered. GDP of Mexico in 2010 equaled 9132,0 USD per a person [4]. With a zero index of Ginie, we can conclude that wages cannot be higher this value. Thus, we can define that with a relatively low unemployment, there is a high demand for cheap labour in Mexico. The state cannot afford to maintain low unemployment level and high wages at the same time. All that forms a low market demand, and therefore, underdevelopment of domestic companies that cannot increase their productivity and wages level. More firms have integrated the World trading according to analysis of the World Bank. These very companies show a significant growth in labour productivity [3, 5].

To conclude the analysis, we can state that integration into the World trading is only a stimulus for countries to leave their poor positions, it is a possibility to improve life quality of citizens through free trade. However, it doesn’t put their economies on the same level with that of developed countries that have their own technologies and attractive market. Nowadays Russia has put itself on a way that was once open for Mexico, therefore, it is necessary to consider those indexes that were determinant for the development of this country.

Opportune creation of technoparks in Mexico could alter the modern situation of this country significantly. Technoparks have a complex effect over a number of critical factors: emergence of domestic qualified scientists/workers and technologies within a country that free it from borrowing the developed foreign ones. These factors lead to an independent development of prior sectors of economy that define life quality, growth of wages, and development of domestic markets.

Russian economy must be directed for creation of technoparks that increase labour productivity and consumption potential of a market, putting itself on the same level with other participants of WTO.

The work was submitted to International Scientific Conference «The introduction of integrated models of educational institutions, implementing educational programs at various levels of education», Singapore, December, 10-18, 2012, came to the editorial office оn 20.12.2012.