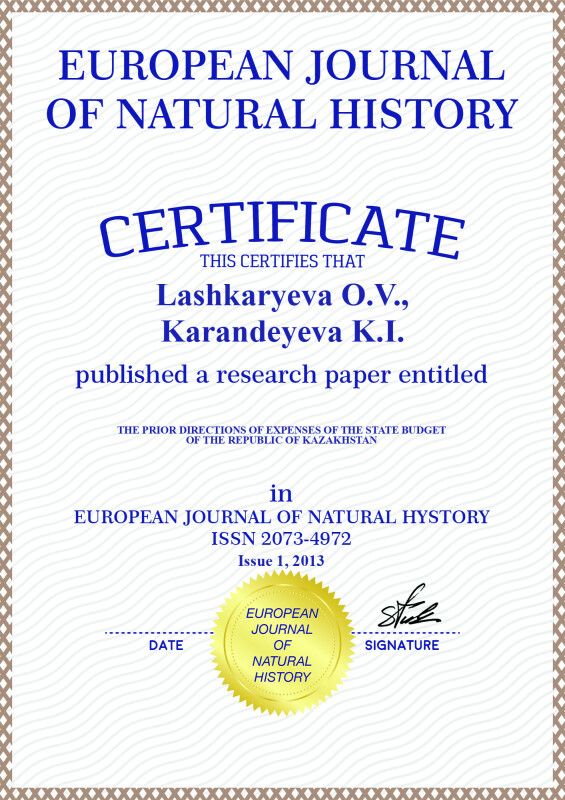 The first document describing the development of the Republic of Kazakhstan for the long term, was the Strategy «Kazakhstan-2030», which, as is known, consists of the following seven basic priorities: National security; Internal political stability and consolidation of society; Economic growth, based on an open market economy with high level of foreign investment and internal savings; Health, education and wellbeing of citizens of Kazakhstan; Energy resources; Infrastructure, particularly transport and communication; Professional state [1, p. 10].

Long-term priorities laid down in the Strategy of development «Kazakhstan-2030» are specified annually, depending on the situation within the country and abroad, and are told by the President in his message to the people of Kazakhstan.

The state budget is a tool for the implementation of the Strategy «Kazakhstan-2030», so the functional expenditure correspond to the priorities of the Strategy, the amount of which for 2009–2011 [2, p. 1] is presented in table 1:

Note – Compiled and calculated by the data of the State budget of Kazakhstan for 2009-2011.

The calculated data in table 1 shows that the long-term priorities of the Strategy «Kazakhstan-2030» depending on the amount of the allocated state budget funds, can be ranked in the following order: Health, education and welfare of Kazakhstan citizens; National Security; Infrastructure, in particular transport and communication; Economic growth based on an open market economy with high levels of foreign investment and domestic savings; Professional state; Energy resources. This ranking once again emphasizes the social orientation of the budget.

However the priority of one or the other direction of budget spending can be determined due to the rates of growth of their share in the total amount of expenses of the state budget.

Structure and growth rate of specific weights of the expenditure volume of the state budget in the long-term priorities, adjusted for the coefficient-deflator

Note. Compiled and calculated by the data of the State budget of Kazakhstan for 2009-2011.

These calculations give a sense of the priority items of state funds’ expenditure:

1. Thus, for example, a long-term priority «Health, education and well-being of Kazakhstan citizens» takes the greatest fraction in 2009-2011 in total amount of expenses of Republic of Kazakhstan’s state budget, despite the annual decrease. Relative density of given item in 2010 in comparison with 2009 had decreased to 0,5 % and had made 62,2 %, so the rate of growth was equal to 0,99. In 2011 relative density had decreased to 0,7 % and made up 61,5 %, and rate of growth remained at a former level – 0,99;

3. Next on the priority of the expenditure of means of Republic of Kazakhstan state budget is «Infrastructure, in particular transport and communication». Relative density of given item for 2009-2011 underwent annual decrease. Thus in 2010 it had decreased to 0,2 %, made up 8,8 %, rate of growth was equal to 0,98. In 2011 the decrease in relative density of article had occurred, decreased to 0,5 %, rate of growth was equal 0,94;

Proceeding from the made analysis, it is possible to emphasize once more the priority of a social orientation of Republic of Kazakhstan state budget in dynamics. Consequently, effective and rational use of budgetary funds of social area is one of the prominent aspects in activity of the state.

At the same time efficiency of expenses from the social point of view can be calculated by coefficient of budgetary security of the population (Cbsp) which is equal to the ratio of the budget expenses for the period and a population in the given period.

Note. Compiled and calculated by the data of the State budget and Statistical digest of Kazakhstan for 2009-2011.

In 2012 expenses of the state budget are aimed on improvement of life conditions of the population and preventing the growth of unemployment, increase of wages, support of small and medium business, development of agriculture, etc. Thus the state expenditure on social area in 2012 will make 3 377 200,0 million tenge – about 53 % of all expenses, and the growth in comparison with 2011 will make 9,7 % [5, p. 3].

Such dynamics allows concluding, that expenses of the state budget of Republic of Kazakhstan for 2009-2011 have strongly expressed social character and in 2012 financing of social area on account of the State expenditure remains the same prior direction. Increase of budgetary funds use efficiency will be reached due to growth of quality of state services to the population, maintenance of the employment, available housing and qualitative growth of the human capital in Kazakhstan.

Thus, the social orientation of the budget in intermediate term prospect will be kept and the basic priority at planning the state expenditure will be well-being of Kazakhstan citizens, namely their social support, health and formation, as well as creation of conditions for qualitative growth of economy.

The work is submitted to the International Scientific Conference «Science and education in modern Russia», Russia (Moscow), November, 20-12, 2012, came to the editorial office оn 14.11.2012.