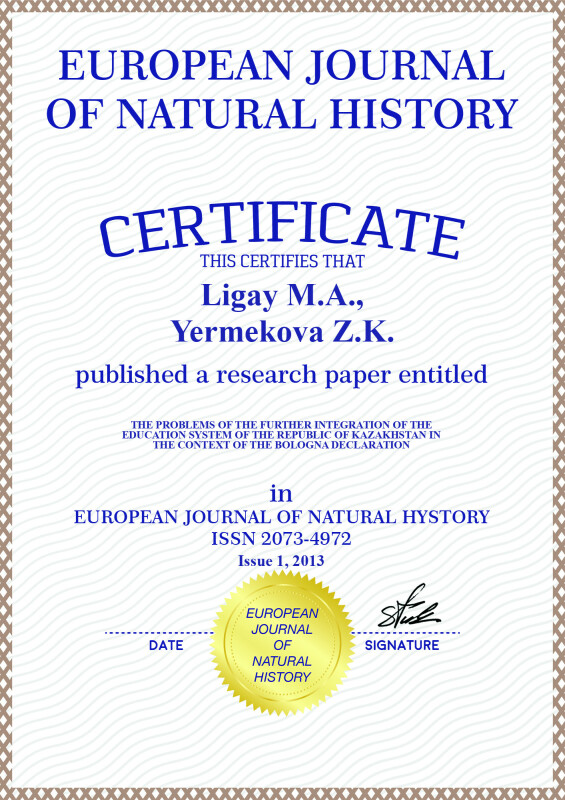 And an introduction of the concept of «human capital» into science has become an extremely important factor in changing attitudes to education. Understanding the importance of education and the educational level of the citizens of the country as a strategic resource of any country, was another important factor in the reforming both secondary and higher education, to adapt to the rapid pace of evolutionary processes in the world, as well as compliance of educational strategic plans for social and economic development of the country.

Integration of Education of the Republic of Kazakhstan in the world educational space – one of the long-term strategic priorities of successful international cooperation. Basic condition of our country’s integration into the world educational space – the adaptation of the educational system of Kazakhstan to the provisions of the Lisbon Convention and the Bologna Declaration, which involves: 12-13 years of schooling, which is the admission to higher education, a two-level higher education system, the introduction of credits of ECTS – European Credit Transfer System, the transition to an integrated system of excellence: undergraduate, master, doctorate (PhD) etc.

In 2010, the year of Kazakhstan’s chairmanship in the OSCE, a decision on our country’s accession to the Bologna Process was implemented. The goal of Kazakhstan’s participation in the Bologna process – access to European education, further improving its quality. In accordance with the obligations assumed by the accession to the Bologna Declaration, Kazakhstan has to implement a number of activities until 2020. Bologna Declaration set the adoption of the system of easily readable and comparable academic degrees, based on two main cycles – undergraduate and graduate[1].

Accession to the Bologna Declaration also acquires special importance in the light of the Message of President Nursultan Nazarbayev «New Decade – New Economic Growth – New Opportunities of Kazakhstan». It spelled out a specific task: «The quality of higher education must meet the highest international standards. Universities of the country should strive to enter the ratings of the leading universities in the world». Work on Kazakhstan joining the world educational space has been carried out for several years.

Since 2004, multistage structure of higher and postgraduate education: bachelor-master-doctorate (PhD) has been introduced in Kazakhstan. This structure has found its legal consolidation in the new Law of the Republic of Kazakhstan «On Education» [2].

In 2007, a Memorandum of Kazakhstan universities («Taraz Declaration») was initiated, which was signed by 18 of our rectors of higher educational institutes of the country. In fact, the Taraz Declaration adheres to the principles of the European Great Charter of the Universities.

One of the fundamental principles of the Charter – the inseparability of teaching activities from research, as education should follow the evolution of the needs of society in scientific knowledge.

Learning outcomes to be comparable, they should be evaluated in the framework of a common system. The most widespread system in Europe is ECTS (European Credit Transfer System). Credit system has two main functions. First – re-crediting of courses obtained at another university, in other words, a student can gain the part of the required amount of units at another university, and his «own» university must set them off the student. The second function – accumulating: for various reasons, a student may be educated «in portions», with a time lag, changing universities, etc.

The program of double-degree education is currently being implemented in 37 universities of the Republic of Kazakhstan, including Gumilyov Eurasian National University. Due to the program of double-degree education, the problems of convertibility of Kazakhstan diplomas of higher education, their recognition at the international level, the involvement of local universities in international rankings and other educational projects are successfully solved in collaboration with foreign universities.

In Kazakhstan, Gumilyov Eurasian National University was one of the first to switch to a tiered system of education. This initiative has a serious basis, as leading universities of the world have long been working on it.

Naturally, integration of higher education system of Kazakhstan into the world educational space requires a transition to the credit program, due to the need to review the whole system of organization and management of educational process not only in universities, but also at the general educational level.

Any reforms in education suggest changes within the educational system (ES) of training and parenting, the functioning of which is determined by the essential principles of didactics.

And, as you know, any activities in didactics, including education, are constructed based on the structure of activity (Leontiev) including: purpose – the motive – content (means) – the results, which was the basis for the emergence of different educational systems (ES).

And, in any ES, the major components playing the role of «the pillars» in it are the teachers and students. It is the tandem «teacher-students» which is the direct functionary of the process of training and education, being a subject to more and more stringent requirements each year.

Today, the trivial axiom needs a special emphasis: it is a teacher, teacher-scientist, who is the essence of any educational system, the practical performer of important new conceptual approaches in the field of training and education [3].

It is fully dialectical that the adequate human resources of teachers – the quintessence of any educational system – are needed to raise the quality of education (training).

Recent years’ superhigh competition for financial and economic specialization becomes an insurmountable barrier for even the best school graduates – excellent pupils and medalists; and the opposite situation: the young people’s rejection of the education system as the sphere of their future activity. This was clearly demonstrated by enrollment of students for the profession, providing for their work in the school, for example, in the natural sciences: Chemistry at School (ChS), Biology at School (BS), Physics at School (PhS), then MS, IS and others.

Attempts to regulate the preferences and choices of entrants by allocating a certain amount of grants have not given tangible results yet – rating of pedagogical (teaching) profession remains extremely low. Applicants were not attracted even by the fact that the passing scores on the aforementioned specialties were set lower than the same on the most prestigious – in terms of today’s youth – ones.

It should be noted that a lot of positive is done, for example, for those who decided to work in rural schools – granting loans for housing, «lifting» money etc. – in order to maintain and raise the educational system to a higher level of quality in the current difficult economic and social conditions

The need to form the teachers of new formation – a teacher-scientist-educator in one, – to create attractive to young people image of a modern teacher, especially teachers of natural sciences, still remains unsolved serious problem of the entire education system.

It is obvious that in the age of rapid scientific and technological progress, the development of innovative processes, nanotechnology, space exploration, the requirements of natural resource management and much more, only highly skilled professionals not only with functional literacy but also with the fundamental basic education and natural-scientific worldview can compete in the international labor market.

It is also obvious that the training of such specialists needs not years but decades and they need to be trained from the school-age.

Thus, the training of highly qualified specialists is closely linked with the problem of raising natural-science education in schools and universities to a new level.

And we think, this is one of the main goals of the reform of the education system of Kazakhstan and its integration into the global educational environment.

The work is submitted to the International Scientific Conference «Problems of international integration of national education standards», France (Paris), December, 21-28, 2012, came to the editorial office оn 18.10.2012.