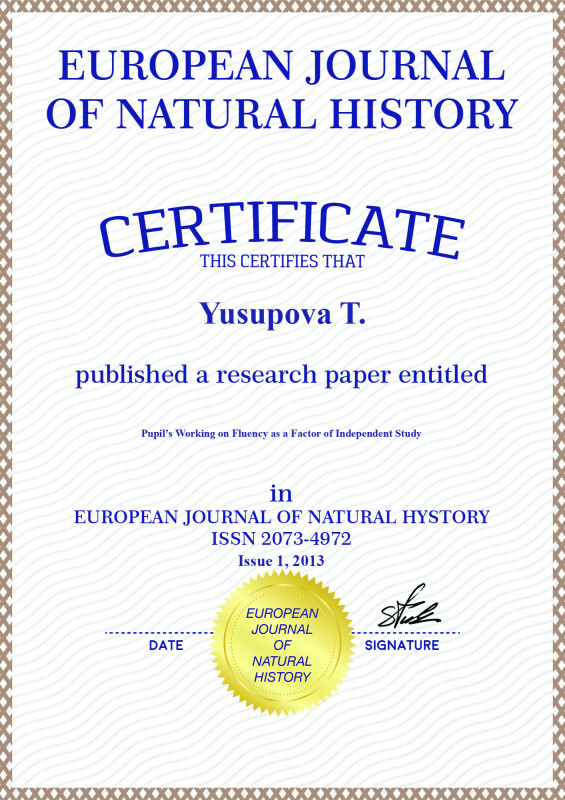 Pupil’s Working on Fluency as a Factor of Independent Study

Article in PDF
216 KB
The article is devoted to the problems of formation of smooth speech. It is necessary to create appropriate conditions for pupls to teach fluent speech and help them correect their mistakes related to speaking improperly. It is necessary to train pupils to make up sentences and to speak and to use grammatically right and appropriate constructions. And pupils should feel the language to be able to retell.
smooth speech
fluent speech
speaking improperly

Development of public education is determined by economic, social, cultural and other factors and conditions of the life of the society. The great scholar I.A. Zimnyaya stated that radical reforms are more closely connected with culture. This type of approach was worked out by the Uzbek scholars as well. According to the concept of teaching Uzbek, vocational education is considered to be the stage of formation of standard of speech (Uzbek maktablarids ona tili ta’limi kontseptsiyasi, 1994). The reason why much attention is paid to develop the youth’s standard of speech is explained by their general assurance of advanced comprehension.

Usually human being’s speech develops on the basis of feeling the language rules. This process takes place as one’s being happy of his success and as one’s being unhappy of one’s mistakes. As professor N. Mahmudov states that “it is an old tradition of Uzbeks to love words, to try to understand words denotative and figurative meanings, to enjoy the beauty of the speech, the harmony of words in speech, and to respect people who use words properly and have art of using words” (Mahmudov, 1998). And that admiration will make a pupil master the art of using words. The fact of not being eloquent makes a person be alone in some cirlces and keep silence for a long time and the lack of speech fluency is the ground for thinking over the reasons of it. Some children who are of pre-school age are usually inactive in terms of speech and they do not speak much in the family, and less attention is paid to speech exercises at school, and the fact that some pupils are unable to master the new topics and difficulties in obtaining knowledge in certain subjects and avoiding to do retelling exrcises, will have a negetive consequences in their future life. There fore one should facilitate correcting pupils’ mistakes related to fluency and create the appropriate conditions which cause the necessity for fluency and strive for learning will appear. It is not easy to catch up with those children who are eloquent and it is not efficient on the first stages. It requires much effort and time to be eloquent.

As G.V. Yeger stated «If the eloquence is obtained without any difficulties there will be no feeeling of language. But obstacles like sound, word and word combination facilitates pronouncing diffulties in speech as they may appear in selecting and pronouncing words, making up sentences and recognising the elements of speech mechanism based on suffering of understanding logical relations. It is vividly seen when making up sentences is unsuccessful and it is reflected in unsatisfaction of emotional reaction». This may be repeated when somebody hears emtional speech of the orator: the listner will be sorry for not being able to speak like the orator. On the contrary, eloquent speech always charms the listner.

Mastering of speech standards is closely connected with speech activities including speaking correctly, selecting appropriate words and word combinations, using them appopriately in its context and expressively. The more speaker thinks of enriching his vocabulary and making up beautiful sentences and polish his speech to sucede in his speech acticvity the more positive changes he will have in his communication. But not everybody can master the art of eloquent speech. The main condition of speech is to inflence one’s listener and make him believe what he says. Speaking trustfully and logically grounded, in its turn, depends on correct flow of thinking process.

A pupil needs necessity for eloquent speech. The difference between speech activity, practical action and speech necessity is revealed as following in the book «Optimization of Speech Impact»: «The speech replaces the action within the activity. As the way of creating the speech is connected with creation of repeated activity and it is directly based on the communication sitiation. Therefore, in the long run, necessity is the ground of any activity based on need. The notion theory of activity is the basic conclusion which can be made related to the speech. It is not directed only to its aim but also to its motivation, expected purpose of the speech according to its intention» (Optimization of speech development, 1990). Therefore a man, besides speaking correctly, tries to speak impressively and trustfully. In this case he will think of demonstrating himself before others and his aim.

Pupils’ speech advantage mainly related to correct and efficient organization of classes in mother tongue. It should be stressed that as much attention is paid to oral and written speech so much attention should be paid to teaching mother tongue, its content and developing new knowledge, skills and abilities. Here revision should be organized properly and it will contribute much to develop speech standards as well.

1) constructions types related to the syntax of simple sentences;

2) peculiarities of parts of sentences.

We think that syntax and morphology described in the textbooks of 5-9th grades should be studied in connection that should facilitate pupils’ correct, smooth, fluent and logical speech which will meet all the requirements. And it will promote syntactical enrichment of the youth’s speech and standard of speech and it will also facilitate the formation of spirituality. It should not be done formally. Revision should be carried out so that eduction fullfills the function of a social society and institute.

Observation and analyses show that on basis of what have been said above we can conclude the following: sufficent attention should be paid to developing oral speech of every pupil in the textbooks in mother tongue. It will be appropriate to do so when other subjects are integrated. Pupils should practice their speech not only on the basis of various topics using one but also using several phrases when retelling them. And in this case they have to practice their oral speech/presentation.

First pupils will speak slowly stopping for a while and then they will obtain the desired results. It is natural that not everybody can participate in oral participation. But a pupil can be directed and managed according to the plan worked out beforehand.

In conclusion, we can say that every lesson in mother tongue should have a task directed to correct every pupil’s shortcomings in his speech and prepare appropriate conditions to make him speak and achieve the aim including other activities for retelling.