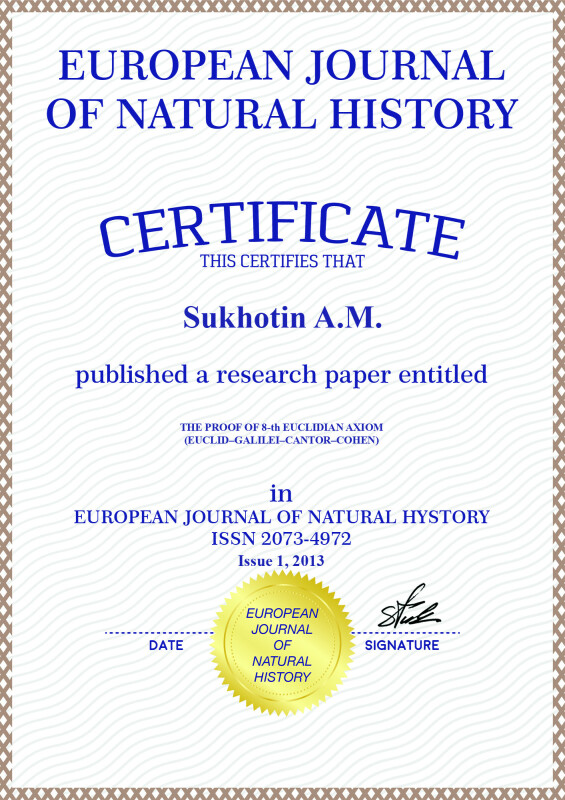 1. Euclid 8 Axiom, which approves: «The Whole is more than its own Part», was appeared [1] in Euclid’s «Principles» already after death of its author. Tannery testifies that as follows: «Geron does not know Euclid 8 Axiom, but Prokl (412–485) had it [1, p. 246]. Euclid himself has had following phrase «…the smaller is equal to the greater, that is ridiculous» [1, Book 1, Statement 6 on p. 21]. On the other hand, G. Galilei, who opened that quantities of natural numbers and their squares are as if equal, bequeathed to be cautious in the comparison of infinite quantities: «… properties of equality, and also greater and smaller size have no place there where it is a question of infinity, and are applied only to the final quantities» (see [2, p. 140–146]). However S. Kleene has written [3, II, IV, 32] about this «Paradox»: «In 1638 G. Galilei has noticed, that squares of the positive integers can be put in 1-1-correspondence with themselves positive integers. And that conflicts with Euclid 8 Axiom according to which the whole is more any of own his frequent». In last quarter of XIX century G. Cantor has created [4] the theory of infinite sets from a regular establishment 1-1-correspondence between pairs of such sets. The concept of capacity of infinite sets was born from such comparisons, as generalization of quantity concept for the final sets. Now almost all mathematicians consider a concept of «one–to–one correspondence» between a pair of sets equivalent with the concept of «bijective function». We usually use from these two concepts the last, as more correct and unequivocally understood. The modern statements about infinity: а + ∞ = ∞, а∙∞ = ∞, ∞ + ∞ = ∞, ∞∙∞ = ∞, ∞∞ = ∞ etc. simplify decisions of many problems on the analysis. However such approach with

deprives a concept of the infinity any definiteness and structure, not supposing its studying and increasing a risk of an occurrence of mistakes in the proofs of statements about infinite sets. Meaning Axiom of Choice (AC), we shall be limited to consideration of quite ordered sets (see also item 3). The main aim of our report is the proof of Euclid 8 Axiom. We use known mathematical texts in our report and we follow the Paul Cohen’s forecast about continuum-hypothesis (CH) [5, IV.13]: «A point of view which the author feels may eventually come to be accepted is that CH is obviously false».

2. To begin with we shall remind [6, 3.5] a correct definition of final and infinite sets: the linearly ordered set F is said to be final one if it is or empty, or one-element, or each its subset, except empty and one-element, has two extreme elements: the least and the greatest. Linearly ordered set In is said to be infinite one if even one its subset has less than two extreme elements.

Everyone knows the set N of positive integers has not greatest number. However, as it follows from Peano’s axioms, the least element of N designates either 0, or 1 [3, IV.32]. The admissibility of this fact complicates understanding of proofs of statements about properties of set N. We shall use a method of the mathematical induction in such proofs. Now we give the most simple and most obvious proof of Euclid 8 Axiom. Let In be an initial piece of natural row:

Everyone can easy prove Theorem 1 by mathematical induction technique. Counterexamples to Theorem 1 are based on naive understanding of the fundamental concepts of set theory: the injection, the surjection and the bijection. We are still not be later to define these concepts more precisely. Let

Stephen C. Kleene used [7, I. 1.2] the diagonal method of Cantor for the proof of uncountability of all natural sequences set. Namely, it has chosen from the set

also has written below them on a square matrix F:

Further he has defined one more sequence f*(k) as follows

. That is obviously the sequence f*(k) has not entered into the list F(2). And consequently Stephen Kleene has made only the following conclusion: «The set of all natural sequences is not countable set». Actually he has proved greater: «There not exists any bijection between set F of all sequences

(meaning that the limit as n becomes infinite

is zero)» [8, p. 27]. The basis Bn of En contains n linearly independent vectors and the set of any n + 1vectors are linearly dependent and there does not exist any injective mapping of basis Bn + 1 into the basis of Bn. And other way there does not exist any surjective mapping of basis Bn into the basis Bn + 1. These statements are easily generalized by mathematical induction technique on infinite-dimensional linear space E∞ (see Theorem1). Let identity matrix E be basis matrix of the all natural sequences set

of an infinitely measured space E∞ – the set

of all natural sequences. Now we shall identify each element fi(k) of this basis B∞ with corresponding natural number i by natural bijection f

Consequence of Theorem 1 and condition (4) holds

The second example too is indicative: a bijectve mapping exists between the set of even numbers and, for example, a subset of these elements of basis B∞, which has even number-index.

3. Generally, we shall prove the Axiom 8 Евклида in the following form

in particular, q ∉ A ⇒ ¬(A ~ (A ∪ {q})). Last implication approves, that infinite sets are broken into the equivalence classes, also as well as final sets, to within an element. Let f ∈ F(A, A) and H ⊂ A then either f(H) = H or f(H) ≠ H. The set Bex(A, A) of all exact ‒ permutations (rearrangements without cycles) f ∈ B(A, A) we define as follows

may be defined by formula:

It is obvious, that the set of elements of a chain (7) is quite ordered, i.е. each its subset has the least element. In such a way we can quite order each set having even one exact-rearrangement. If ∃ξ∈ Bex(A, A) then ξ(a) = g ≠ a and the mapping ξ will transform a full a-chain (7) into some full g-chain which has symbol P(g, ξ, A).

Let a family S(P(A)) be a class that contains only all elements of set P(A) and all chains from its elements. Then any chain V has the least element, if it was built from the elements of some full q-chain P (q, ξ, A) ⊂ S(P(A)).

Thus, we shall receive following decreasing sequence Z of investments:

4. Comparison of axiomatic definitions of the set N by different authors suggests that in set N as there is no the greatest number, and the least number is defined by a choice of the author (for example, there is the least natural number unit by Peano and Kleene has zero as the least natural number). In opinion of the author of this report, such situation complicates search of the correct proof of the Axiom 8 Евклида for set N, on the one hand, and, on the other hand, causes the assumption of the feasible existence of different theories of the real numbers dependent upon the first element of set N.

The work is submitted to the International Scientific Conference «Science and education in modern Russia», Russia (Moscow), November, 20-12, 2012, came to the editorial office оn 27.11.2012.