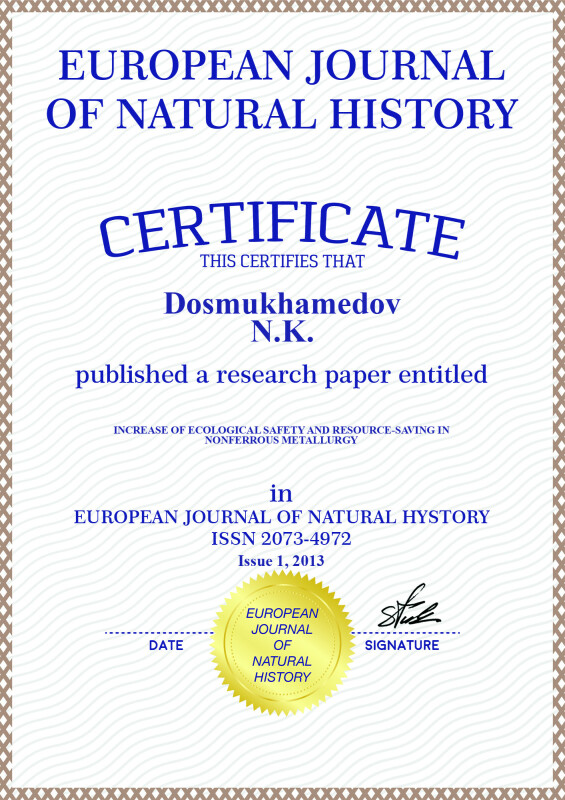 INCREASE OF ECOLOGICAL SAFETY AND RESOURCE-SAVING IN NONFERROUS METALLURGY

Article in PDF
356 KB
In work the schematic diagram of teсhnologo-ecological model of management by process of mine melting of the lead production providing the solution of problems of greening of process, improvement of working conditions and safety of the working personnel is submitted. The structure of the new block of the analysis of concentration of harmful substances (copper, lead, arsenic, etc.), allowing to carry out the account and an appraisal of influence of harmful substances on working conditions and safety of the working personnel is offered. It is shown that in a working zone of the founder and in the shop atmosphere as a whole, corresponding to admissible limiting concentration, it is possible to reach stabilization of concentration of harmful substances by control, regulation in technological parameters and optimization of structure of initial and received products of melting.
model
mine contractile melting
control
regulation
concentration
harmful substances.

At the modern stage of lead production the existing old processes do not meet the requirements of technology and safety of labour and staff. LLP «Kazzinc» (Ust’-Kamenogorsk, Kazakhstan) is referred to the most hazardous enterprises of the republic according to its effect over the environmental pollution. The process of mine retraction melting that is used on LLP «Kazzinc» for processing non-condition industrial products, turnover materials, and converter slag is the most low-technologic and ecologically hazardous object in the general scheme of lead production due to increased contents of harmful substances in the initial and received melting products. Increased contents of hazardous substances that concentrate in melting products have a significant impact upon conditions of labour and health of personnel. Solving problems of normalizing air in work area according to the conditions of mine retraction melting proves to be urgent.

The objective of this work is to develop an effective technologic-ecological model of managing the process of mine retraction melting that would establish a control, regulation, distribution of copper, lead, arsenic, and antimony between melting products.

While solving the set goal, we have been grounding on the developed information-analytic environment (IAE) and operative system of control and regulation over technologic parametersof the process of mine retraction melting, composition, structure and action principle of which are described in detail in works [1–3]. Development of an effective technologic-ecological model was narrowed to a logical construction of interrelated blocks, each of them had its own functional peculiarities and was aimed to solve a specific problem.

The new developed block includes: database of the initial statistic information and parameters of labour conditions and safety; database of the comparative analysis of results that has been equipped with enquiry module.

Database of the initial statistic information and parameters of labour conditions includes accumulation of data, carrying out analysis and initial processing of statistic information. The base is equipped with a special storage that contains data on labour conditions parameters according to the mining refraction melting (temperature of a melter’s work area, concentration of hazardous substances, humidity, speed of air movement, etc.

Database of comparative analysis is supposed to carry out comparative evaluation of the received results on concentration of copper, lead, arsenic, antimony in the atmosphere of workshop and melting products with their normative values according to MPC and sanitary norms of microclimate. The base was additionally equipped with an enquiry module that stores reference data on physical-chamical characteristics of hazardous substances and their solutions, and also data on MPC of MPC of hazardous substances and their solutions that are typical for lead production. The reference module also keeps the legal information that has been grouped by the importance and holds:

– existing and accepted laws, legislative acts, regulations of the Government of RK, linked to protection of labour;

– regional programmes and resolutions that are aimed to provide improvements in labour conditions;

Compilation of the developed structural components of IAE and operative scheme of control and regulation of technologic parameters of the process with new block of analyzing concentrations of hazardous substances allows us to imagine a composition, structure of an effective model of managing mine refraction melting as a principal scheme that is provided in the picture.

Information on the initial charge, received melting products, values of temperature and partial oxygen pressure in included into the database of initial statistic information directly from the research object, in our case – from the mine of refraction melting. Unlike the block of statistic information and initial processing of statistic data that is included into IAE, in this area, initial processing of a massive is carried out without its selection (sorting). Such approach allowed us to make evaluations of an impact upon labor conditions and personnel safety of those critical parameters that come out of regulated values and do not take part in further analysis and calculations aimed to defined optimal technological process parameters.

Principle scheme of technologic-ecological model of mine fraction melting process

The analysis of discharge has a basic significance for practice, from the point of technology and defining the degree of impact of copper, lead, arsenic, and their compositions over labour conditions and personnel health. Providing control over concentration of hazardous substances in the atmosphere of a melter’s work area (with standard known facilities) under discharge of liquid products from a mine in dynamics allows us define their dependence on the contents of the received melting products via operative calculations. Besides, stabilizing concentration of hazardous substances in a melter’s work area and an atmosphere of a whole workshop in accordance with maximum permitted concentrations, we can achieve optimization in the composition of melting products.

Making operative calculations has a basic significance while defining concentration of hazardous substances and their solutions in cases of accident in a furnace operation, when discharges into a workshop atmosphere can be described with significant concentrations. According to calculations we can accurately define a class of hazard of the discharged substances, evaluate level of their load over the personnel in dynamics, take necessary measures, aimed to neutralize negative consequences. Thus, in the developed model, when the studied indexes oscillate from the set normal concentrations of hazardous substances, we foresee an operative activation of light-and-sound signalization that informs on a violation of labour conditions and safety of the process. When the system signals, it is necessary to take actions, aimed to correct technological parameters of the process and create favourable conditions in order to improve ventilation in a workshop, for example, due to a supply of fresh air.

Realizing this model in practice allows us to define optimal indexes of not only output parameters, but also carry out operative correction of the content of initial charge of a mine of refraction melting. Thus, in order to achieve optimal values of output parameters, it is necessary to assure that contents of copper, lead, arsenic in the initial charge equal 26,37; 33,07 and 2,51 % correspondingly [1]. Correction of the contents of initial charge can be carried out via either cutting down a part of added converter slag into the initial charge, or its complete exclusion from the composition. Besides, we can foresee separate processing of converter slag with known hydro- o- pyrometallurgic methods [4–6].

Exclusion of converter slag form the contents of initial charge can have a significant influence in cutting down the output of slag, create premises for decrease in temperature of slag melting and achieving optimal values of partial oxygen pressure. Further optimization of slag composition can be realized via selecting its main components. Thus, in practice, due to corrections in slag composition, after increase in contents of СаО from 18 to 21 %, SiO2 from 26 to 30 % and decrease in contents of Fegen from 28 to 24 % in it, we managed to decrease the temperature of the process from 1579 to 1528 K.Optimizing slag composition and decrease in process temperature has created favourable conditions for melting in terms of recovery atmosphere. The described measures allowed us to decrease concentration of copper in slag by more than 20 %, and lead – by 31 % (from 1,38 to 0,95 %). Copper contents in matte, with a simultaneous decrease in lead from 26 to 20 %, grew from 38 to 44 %. Increase in slag and matte quality had a significant influence over final technological values of the process: copper output into matte grew from 83 to 97 %, and lead and rough lead – from 45 to 60 %.

Favourable conditions for optimizing technological parameters are also created to assure an equal distribution of arsenic and antimony between melting products. While correcting technological parameters of the process using the developed model, distribution of arsenic and antimony into dust grew from 76 to 67 % correspondingly, against 43 and 41 %, received with the existing scheme.

Stabilization in output of melting products and contents of copper, lead, arsenic, antimony, and their solutions allow us to maintain their constant concentrations in the atmosphere of the workshop working area. Decrease in temperature of slag melt, and, therefore, temperature of matte and rough lead decrease the level exhalation of copper, lead, and arsenic from the described products. As a result, concentration of metals that impact a person’s health decrease in the workshop area. Thus, improvements insanitary-hygiene labour conditions are achieved, microclimate in the workshop is established, operation of venting systems is stabilized.

Permanent control over contents of copper, lead, arsenic in initial and output melting products, and also the data on their distribution between melting products allow us to define their maximum permitted concentrations in the received products. The received data allow us to carry out calculations on specifying hazard class for initial components of charge and received products, define total index of their toxicity [7], and also predict penetrations of copper, lead, arsenic into different components of the environment under mine refraction melting. In case the calculations show that some of the materials that are included into initial charge of mine refraction melting correspond to an increased hazard class or high toxicity level, such materials should not be exposed to processing according to the existing technology. Exclusion of materials that have a significant impact upon stabilization of optimal contents of the received melting products from the composition of initial charge, will allow us to improve labour conditions significantly due to decrease in concentration of hazardous substances in a workshop atmosphere.

The developed model is constructed in way when each of its key systems (IAE, operative control and regulation scheme, block of accounting hazardous substances) has its own divided chain for broadening its limits. This complex approach can widen functional abilities of the whole model.

Limits of abilities of this model can be expanded through developing and adding new additional data banks and bases that have a direct relation with the process of mine refraction melting. For example, the content of the developed model can be enriched with a database that would control and prevent negative actions that lead to accidents. We also consider inclusion of database that would contain information on composition of initial materials, output melting products, temperature regimes, etc. with a further development of client application, aimed to solve specific problems with a purposeful usage of the necessary information.

The structure of technologic-ecological model is quite universal and it can be utilized for control, regulation, and optimization of technologic parameters, improvements in labour conditions, and increase in safety of any metallurgic process. The only requirement is a change in contents of information-analytic system, considering specific technological parameters of the studied risk objects.

1. The work contains scientifically-grounded and suggested methods to improve labour conditions within the process of mine refraction melting as one of the objects that represent the highest degree of risk.

3. The suggested structure and functional abilities of the model allow us to apply it to other hazardous processes of lead and copper production considering their specifics.