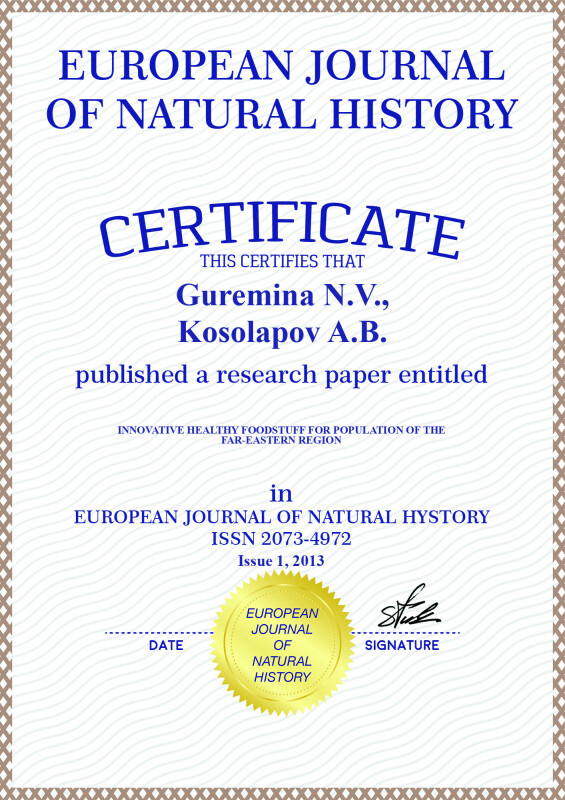 INNOVATIVE HEALTHY FOODSTUFF FOR POPULATION OF THE FAR-EASTERN REGION

The problem of health preservation and human proper nutrition has always been and remains one of the most important and vital problems in order to provide favorable demographic situation. Modern science devoted to the problems of healthy nutrition represents dynamically developing field of human activity, which combines the great number of fundamental and applied biological and medical disciplines. It gets especially obvious if to the example of the special-purpose foodstuff production based on vegetable raw materials, targeted to different age groups.

By special-purpose foodstuff we imply products intended for regular use by all groups as a part of food ration, preserving and improving health and reducing the risk of food-caused diseases, what is achieved though including special-aimed food ingredients, possessing capability of producing favorable effects on vital physiological functions and metabolic reactions of human body.

In the scientific researches conducted by the Far-Eastern Federal University (FEFU) the priority position is occupied by the researches in food technology, including development of special-purpose, healthful and dietary meals products. On the University base there was established the Educational-Scientific-Technical Complex, which allows introduction the results of the scientific researches into education process and certificating new technologies in structural innovative departments of FEFU: small tonnage production of fish products, innovative technology centre and students canteens network.

Recently Far-East regional food producers have started expressing an intense interest in new technologies, developed in the University. Unique character of new foodstuff lies in the fact that the most part of the them is produced on the basic of local raw materials (wild-growing herbs, seafood), having wide range of physiological effects. The technologies applied are resource-saving, what in turn allows producing foodstuff considering the raw materials natural biochemical features while preserving all native properties with minimum waste and losses. These help to increase the number of orders for new original technology development of traditional food production technologies.

FEFU has a certification department which draws up the applications for patents. The main topic of applications is a development of new food technologies. In most cases the authors of patents are the scientists, professors and senior lecturers of the University. The University experts annually receive up to twenty Russian patents for their inventors.

Taste and quality of the products, being developed here. The foodstuff have been recognized not only by consumers, but also by the representatives of leading producers of food industry in the Far-Eastern Region. FEFU is a participant and multiple winner of exhibitions and contests. The achievements of the scientific-research stuff had been recognized and awarded with medals, diplomas and patents of regional, all-Russian and international exhibitions. Participating in seminars, conferences, symposiums, degustation-exhibitions, which are held in different scientific scientific-research institutions of the Far-East, FEFU shares it’s achievements and researches results in food technology and calls all interested organizations for cooperation.

Here is the list of not all but a few foodstuff produced by us:

2. Food for people who live in unfavorable ecologic and climate conditions (high radiation, different technogenic pollution and other bad environmental factors): mayonnaises and creams based on vegetable emulgators, bread and pasty with modifilanium and soybean flour, pro-biotic products, vegetable deserts, dry beverages based on natural juices with iodine additive.

The work is submitted to the International Scientific Conference «Science and education integration», Maldive Islands, February, 15-22, 2013, came to the editorial office оn 20.12.2012.