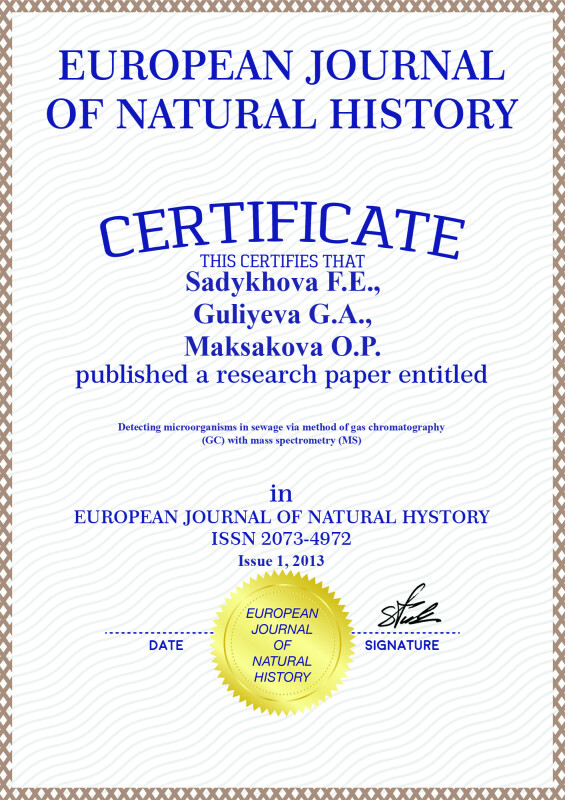 Article in PDF
313 KB
The article presents the results of studying sewage before mechanic cleaning and silt from silting grounds of Govsaninskaya station of Baku with bacterial flora. A spectre of aerobic and anaerobic microorganisms has been received. It has been established via express method of detection – chromatography with mass spectrometry. Expression, sensitivity, and informativity of the method, and it can be utilized for monitoring infections from various positions.
sewage
silt
detection
bacterial flora
chromatography with mass spectrometry

The main purpose of sanitary-microbiological research of sewage is a supervision over an efficiency of cleaning and disinfection of sewage and their sediments before introducing them into pools, seas, and irragation fields.

According to the existing regulative documents, in a number of cases uncleaned water or water at the stage of cleaning before chloration is studied for presence of lactose-positive bacterias, and after chloration bacterias of Enterobacteriacea family are defined for a control of operation of cleaning facilities [1, 2].

But, considering the fact that in terms of Azerbaijan sewage are introduced into the sea after cleaning and it is also used in irrigation, and silt deposits are used as fertilizers, there is a necessity for a new, accelerated and broadened control over water cleaning.

The research has been carried out via classic general bacteriological and virological methods of indication and identification that, as known, are informative, but labourious, expensive, and long.

Considering the mentioned information, target objective of this research is to reveal a spectre of bacterial flora in sewage and active silt at silting grounds of Govsaninskaya cleaning station of Baku, with processing and utilizing gas chromatography with mass spectrometry for detecting microorganisms.

Probes of sewage, selected before mechanic cleaning and probes of active silt from silting grounds of Govsaninskaya cleaning station were selected as materials of the research.

Detection of bacterial microorganisms was carried out via method of gas chromatography with mass spectrometry [7, 8, 9].

Method of gas chromatography is one of the modern analytic instrumental methods.

Data bank of chemical components of clinically-significant microorganisms (NIST) served as a basis for defining kinds of microorganisms.

An analysis is preceded by processing probes of sewage – its centrifugation under 2500 rpm during 30 minutes in order to sediment large disperse fractions. Then comes a period of probe preparation – discharge of fractions of lipid acids and their transition into compositions, suitable for chromatographic analysis.

After biopreparation, 0,4 ml of probe is dried with addition of small amounts of methanol (0,2 ml).

Then, 0,2 ml of 1,7 М НСl is added into metanol and methanolysis under 80 degrees of celcium is carried out during an hour.

As a result of reaction of methanolysis, LA (lipid acids) are freed as methylic ethers of lipid acids. These components are extracted two times with hexane – 200 mcl (microliters).

Reaction solution in quantity of 2 mcl is introduced into an injector of chromate mass spectrometer GCMS-QP-2010S (Shimadzu, Japan).

Chromatographic division has been carried out on a capillary column 50 m long, 0,32 mm in diameter, with film thickness of 0,53 micron.

Interpretation of data of mass fragmento grammes consists in defining peaks’ belonging to corresponding substances according to their mass and time of chromatographic hold (Ret. Time). It is defined according to chromatogram me in scanning regime, when it is possible to define a nature of chemical component of a cell.

Comparison was carried out according to NIST library.

The result of chromatographic analysis of sewage probes has established a presence of markers of bacterial flora of wide spectre (Fig. 1) that corresponds to a certain type of microorganisms (table 1).

As you can see in Fig. 1, each component of a solution corresponds to a separate peak on chromatogramme. Time period from the beginning of chromatogramme to peaks is called retention time (tR).

Defining qualitative composition of a solution is carried out via comparing tR of a given component and a standard – a substance of a known culture. Coincidence in standard tR and tR of a defined component indicate their identity. A standard is often added to a utilized composition (marking method). Besides, a number of peaks in chromatoramme does not change, and an intensity of a peak of a component increases.

Fig. 1. General chromatogramme of revealed markers of microorganisms in sewage

Defining quantitative composition of a solution is based on an assumption that an intensity of a peak of each component is proportional to its content in the solution.

Normally, a height of a peak h is multiplied by its width W, measured at the middle of a peak’s height: S = hw.

Utilizing mass spectrometer as a detector of gas chromatograph allows us not only to register presence of a divided component in it, but also establish its structure.

A wide usage of chromate mass spectrometers has actualized a necessity to create giant libraries, databases of mass spectres of various solutions.

Speaking of advantages of mass spectrometry we first of all should outline a sensitivity, expressivity, informativity, and reliability of the method.

This method is a universal method of indication that is equally effective for aerobic and anaerobic microorganisms (G.A. Osipov, 1996) [9].

Thus, the following microorganisms’ markers have been revealed in sewage: general coliforms, Streptococcus faеcalis, Pseudomonas aeruginosae, Baccilus subtilis, Clostridium perfringens. Peptostreptococcus, Bifidobacterium, Staphylococcus, Actinomyces, Propionibacterium. A similar spectre of markers has been revealed while studying active silt that is used for inactivating microorganisms in sewage according to phenomenon of interference of saprophytic factor μ (table 2, Fig. 2)

To conclude, we should say that results of our research in field of hygiene and microbiology of environment give us ground to claim that utilizing methods of chromatography with mass spectrometry as an express method of detecting microorganisms in an environment is purposeful for control over cleaning sewage at cleaning stations and in specific epidemic situations.