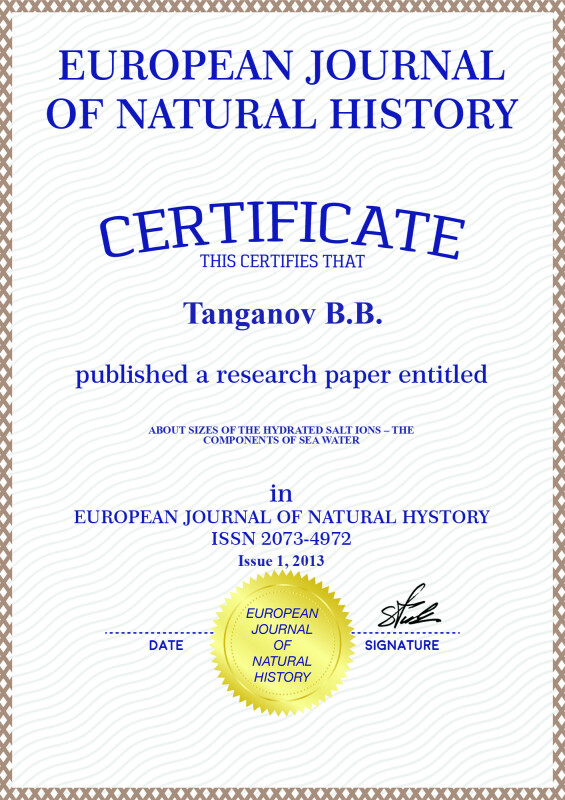 Distillation desalination method leads to huge electricity consumption and therefore alternative, less expensive ways are being searched for. Construction and operation methods of desalination with the help of various membranes (e.g., the method of reverse osmosis) involve large energy and economic costs. In particular, for desalination of 1 cubic meter seawater not less than 400 kilowatts of electricity and the pressure to 6,5 MPa (65 atm) are required. When the mesh size has a radius of 0,1 nm, the costs are much more than the production of the membrane with a radius of 0,2 nm. Since the radii of hydrated ions are significantly (almost twice) larger than the radius of a water molecule (0,138 nm) passed through the membrane, then the estimation of the size of hydrated ions, the components of sea water (mainly: Na+, K+, Mg2+, Ca2+, Cl–, SO42–) for the manufacture of membranes with optimal size becomes meaningful because of lowering operating pressures and reducing costs of manufacturing devices for desalination.

As a rule available information on individual nS ions, benchmarks for assessing the size of hydrated ions, determined by Russian and foreign researchers differ by several units. For example, the hydration number of K+ion is 16 by Remy and 1,9 – by Robinson-Stokes equations. The high value of the hydrated potassium ion by Remy can be explained by the fact that the model of ionic hydration involving all water molecules in the formation of hydration shells, which, of course, could not be possible.

For some ions these numbers are given in table 1.

Values of ions hydration according to various authors

A non-empirical method for calculating hydration numbers of ions in solutions [1, 2] is elaborated, according to which the ion charge qi = zie in liquid, incompressible polar dielectric is screened by the nearest environment of solvent molecules forming the hydration shell.

The interaction of ion is dipole. The relevant potentials are equal:

where e is dielectric constant, Rs is radius of the solvent molecule.

The potential of the central ion in a dielectric medium is neutralized by the dipole potentials jd of solvent molecule (by the number of ns):

where jp is the resulting potential.

If equation (1) transform into the finite-difference equation of ion-dipole energy, then from the obtained equation (2), the boundary of the hydrated complex is cut by energy of thermal motion 5kБТ/2, in the form of evident condition ejp = 5kБТ/2, which means that the obtained difference between the energies of ions and water molecules is compensated at the boundary of the thermal energy of the medium itself 5kБТ/2:

Here ns is the number of solvent molecules in the hydration complex and kБ is Boltzmann constant. Thus, the hydration number ns will be determined by the relation:

where zi and ri are charge and ionic radius.

Now let’s consider the size of nanoparticles, the radii of hydrated ions. According to our concept [3, 4, 5], they can be calculated basically on the model of oscillating with a plasma-like frequency of particles in electrolyte solutions using the dispersion of the Vlasov’s equation:

The dipole charge is zDe = p/l, where p is the dipole moment and l is dipole distance for the solvent.

Damping parameter krD, where k is a wave number, rD is Debye radius, has limits of changing 0 ≤ krD ≤ 1. In considering the ions of electrolyte in the solution as a system of charges, krD = 1 takes place, i.e. spatial dispersion is at maximum, oscillations are damping, but they are maintained at a frequency of external perturbation.

If you multiply the expression (7) on the Planck constant ħ, and bear in mind that the total energy hw is (3/2)kБТ (for spherically – symmetric distribution all three degrees of freedom are taken into account), then we obtain formula (8), in which values no и zDe, given earlier, are introduced:

The values of the radii of solvated ions in water, calculated according to equation (8), are also listed in table 2.

As it seen from table 1 and 2, the estimated hydration numbers and the radii of hydrated ions (the size of nanoparticles) are in satisfactory agreement with scientific literature data. The given model estimates the size of hydrated ions of seawater and the obtained values rs can be recommended for the development of more energy-and resource-saving technologies of seawater desalination not only for the regions with a harsh shortage of drinking water.