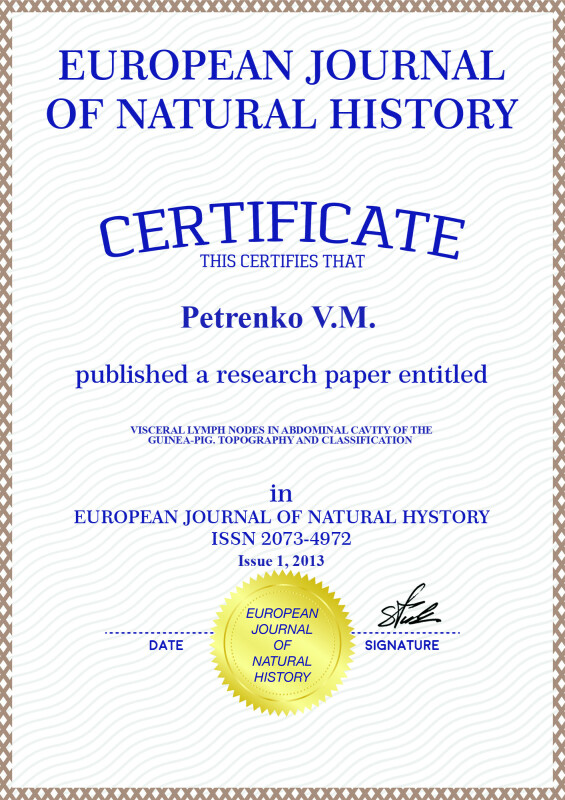 VISCERAL LYMPH NODES IN ABDOMINAL CAVITY OF THE GUINEA-PIG. TOPOGRAPHY AND CLASSIFICATION

I studied 10 guinea-pigs of 2-3 months old and found such visceral lymph nodes (LN) in the abdominal cavity:

2) hepatic LN (1-2) with shape as bean or coffee-bean, on the left side from hepatic portal vein;

4) pancreatic LN (2), the left (gastropancreatic), about gastric branches of splenic artery, and the right, near bases of cranial and right caudal branches of tail of pancreas;

5) splenic LN (1-2), the most small among all visceral LN in the abdominal cavity, lie near hilus of spleen and right dorsal branch of tail of pancreas;

8) paracolic or distal central cranial mesenteric LN (3-4), in short common root of mesentery and mesocolon, the most large among these and all visceral LN of abdominal cavity – the proximal LN (labout duodenojejunal flexure, more ventrally, with shape as coffee-bean) or offer the distal LN (about apex of caecum with shape as horseshoe, which is segmented probably in result of fusion of few LN or incomplete division of their anlage);

9) ileocolic LN (2) with bean΄s shape and different sizes, lie on both sides of ileocolic blood vessels, in the bend of terminal segment of ileum, between ileum and place of division of ileocolic artery on the end branches, one of them passes under the large LN to the bend of ileum;

10) ileocecalis LN (1) with bean΄s shape, more wide than large ileocolic LN, lies on the base of caecum, more distal, than ending of ileum;

The coeliac LN may be consider as the central among LN in basin of coeliac artery.

The work is submitted to the International Scientific Conference «Science and education integration», Maldive Islands, February, 15-22, 2013, came to the editorial office оn 27.11.2012.