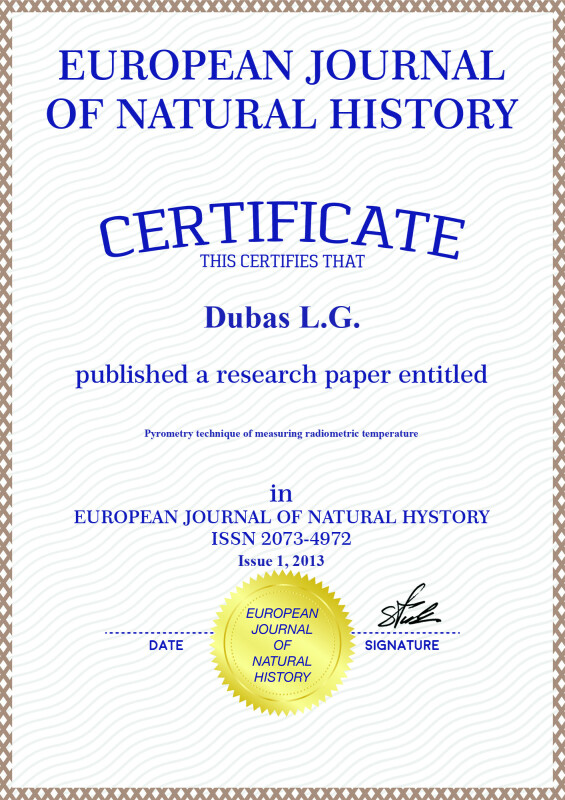 The pyrometry technique development with use of multi-tier of thermal ratios is offered. A dependence of a relative module of methodical error from multi-tier values specifies relative decrease at general example.

Here is developed quite actual pyrometry technique of the real-valued temperature measurements.

The temperature unit is one of basic natural units at measurement of physical quantities [1].

The pyrometer here is comprehended as the radiometric thermometer of the spectral or thermal ratio for which computing formulas are lower stated [2-4].

Let’s convert the Planck formula to the following equation for the gauged temperature [2]:

A multi-tier measurement (1) will be matching to a collection-set radiometric temperature.

Such a method is called multi-tier technique carried out in operations with preliminary or additional detection of a system’s state. The averaging on a spectrum and on sample of values of agentive temperatures with some weight coefficients here is supposed. The real-valued inverse temperature is being defined by weight interpolation on inverse agentive temperature’s samples.

Let’s admit that the relative module of methodical error in (1) is negligible and next we gain.

Necessary ‘gj’ – weight coefficients can be received with use of averaging and interpolation.

For example, we will theoretically investigate estimation’s methodical error of temperature measurement at heating with temperature 1100 K and measurement of a spectrum of thermal radiation in a perpendicular direction from out surface of iridium over the range lengths of waves 900–1700 nanometers. One reckoning wave length equal to 900 nanometers. Two agentive temperatures are equal to 1500 and 2000 K. The given sampling of temperatures is caused by the iridium radiation factor reference data, represented in the article [5]. Also we will assume that relative error of simplified reference radiation factor is negligible.

For example, after the simplified calculations we gain the relative methodical error of iridium temperature measurement on 1100 K (j = 1) in dependence from multitier values {s, t}, which is noted in formula (1). Methodical error of a collection-set radiometric temperature (2), with (s = 2, T2 = 1500 K) at dependence from multitier counts {t = 2, 3} is in next approximate quantities.

The result of pyrometric temperature measurement depends on how much the temperature dependences of optical properties are studied for a given object and a given optical path and how the measuring scale can be calibrated directly in experiments. Also the emissivity and the absorptivity of microparticles and/or nanoparticles (MNPs) should be taken into account. Along with thermal radiation, characteristic radiation (atomic radiation lines) can also be excited. The latter should however be ignored to obtain reliable pyrometric data for the temperature.

The work is submitted to the International Scientific Conference «Present-day problems of science and education», Russia, (Moscow), February 26-28 2013, came to the editorial office on 20.12.2012.