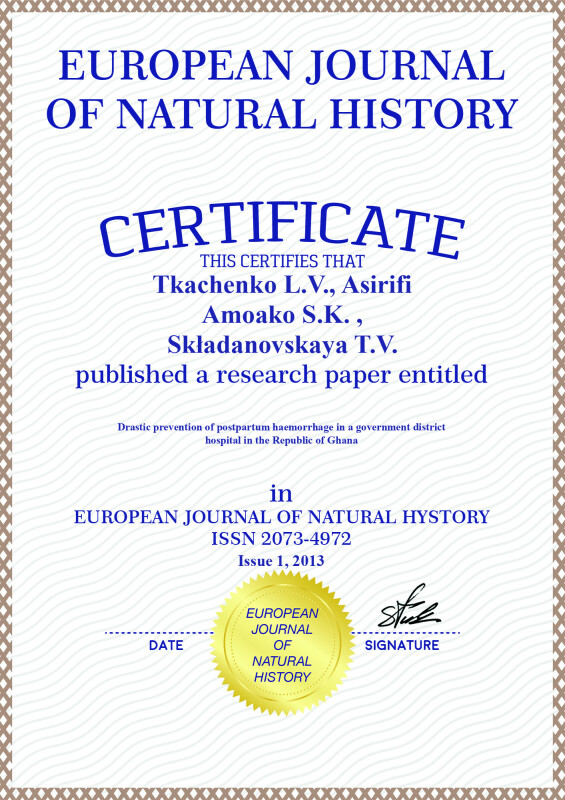 Postpartum haemorrhage (PPH) has consistently been the leading cause of maternal mortality in the world. While in the USA and developed European countries maternal mortality has been reduced below 10 per 100,000 live births, many countries in Africa and South-East Asia still have maternal mortality rates above 50 per 100,000 live births and a developing country like Ghana is no exception. National concept of combating maternal mortality supported by WHO based on overcoming the «three delays»: adoption (woman and her family) of decision to seek medical care, admission to hospital and receiving adequate treatment after admission. [6].Given the socio-economic, cultural and community features of Ghana as well as common problems with health organizations, this concept does not produce its expected results in this country [4].

There is no doubt that safe childbirth for women and newborns goes beyond the competence of practical obstetrics and gynecology. Realizing that the solution to socio-cultural and community aspects of this multi-disciplinary problems with regards to a specific obstetrics facility is not the real problem, we consider it necessary to improve the action protocols for women with obstetric risk of PPH being admitted directly into the facility since in Ghana this is between 25–40 % of all patients.

Objective –to assess the effectiveness of drastic emergency prevention of PPH in a district hospital of the Republic of Ghana with drastic medical support in the second and third stage of labour.

Materials and methods of research. A comprehensive clinical, laboratory examination and active treatment study of 104 pregnant women with gestational age of 37 weeks or more admitted for delivery at the obstetrics unit of the Kwahu Government Hosital-Atibie (Kwahu South District) in the Republic of Ghana from 2007 to 2011. Inclusion criteria were the presence of at least one of the risk factors for PPH concept of the four «T» [5].

1. Abnormality in the contractile function of the uterus – «Tone»: over distension of the uterus as in the case of polyhydramnios, multiple pregnancy or macrosomic baby, abnormal myometrial contractility in rapid delivery, prolonged labour, parity «5+», chronic infections and fever during labour.

2. Functional and anatomical features of the uterus – «Tissue»: tumors of the uterus, placenta previa, abnormal separation and isolation of the placenta, placenta accreta or increta, hypotonic uterus.

3. Tears in the birth canal – «Trauma»: tears of the cervix, vagina or perineum during delivery, operative vaginal delivery, cesarean section, uterine rupture in the anomalous insertion of the head, clinically narrow pelvis, inversion of the uterus.

All mothers were divided into two clinical groups with 52 patients in each. The comparison group consisted of pregnant women who received prophylaxis of bleeding according to the national standard of care in obstetrics of the Republic of Ghana [3].

The study group included 52 patients who underwent drastic prevention of PPH by the proposed method consisting of: Tranexam-1g (tranexamic acid – an inhibitor of fibrinolysis, transition inhibitor of plasminogen to plasmin) in the first stage of labour and ergometrine – 500 ug intramuscular in the second stage when the head erupts. Active management of third stage and the postpartum period was carried out in 50 cases (96 %) by giving 10 IU of oxytocin infusion over 4 hours.

Patients in the medico-social aspects were identical since the distribution of patients was carried out by direct selection with balancing essential characteristics (table 1).

In this manner, the main clinical indices were comparable between the groups themselves which indicates the reliability of the results.

Results of research and their discussion. During the first phase of the study, the most common risk factors for postpartum hemorrhage (PPH) were identified. These include parity «5+» of uterine abnormalities (rapid and prolonged labour), abnormality of separation mechanisms of the placenta, hypotonic uterus, malaria and other severe infections. The results of this study can identify pregnant women at risk for the development of these conditions in order to conduct its adequate prophylaxis (table 2).

In the second phase, we evaluated the efficacy in the prevention of bleeding using the proposed method with the following results (table 3).

In the study group there were no cases of massive blood loss but in the comparison group, this pathology was found in 8 women in labour which forms 15,2 % indicating a high efficiency of the proposed method.

The structure of blood loss in delivery

Thus, the isolation of group at risk together with timely and adequate prevention of postpartum hemorrhage has reduced this pathology 3 times and is now one of the possible ways to reduce maternal mortality in the Republic of Ghana.