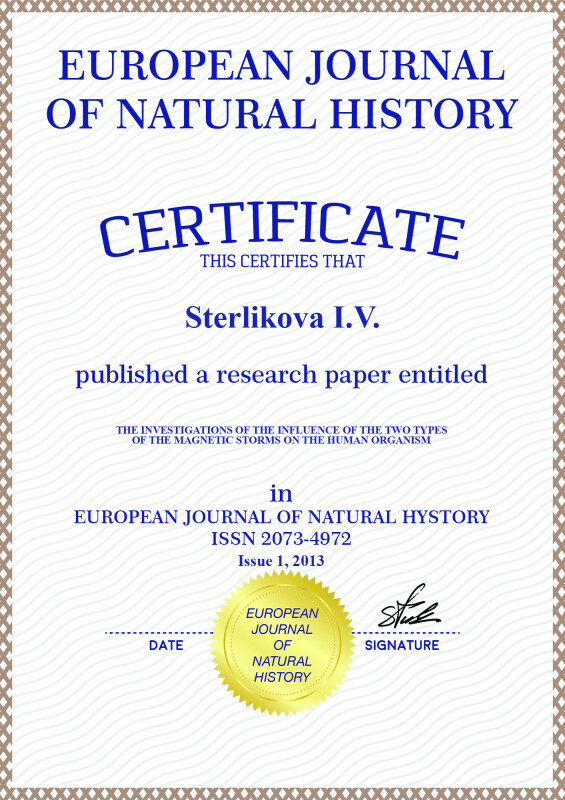 The present work was carried out at the project of the International Geosphere-Biosphere Programm «Global сhanges». According to the resolution of the General Assamble of the International Council of the Science Unions in Bern in 1986 IGBP became by the continuation of the programms «International Geophysical Year» (1957) and «Human being and biosphere»(1980). A study of the problems of the sun-biological relationships was first begun by A.L. Tchizhjevsky [1]. The investigations of the influence of the sun activity on the human organism were undertaken later [2, 3] regardingless to the concretic magnetic storm.

The present article reports statistical results of the treatment of the medical and geophysical data. The medical data were taken from the station of the first medical aid. The station of the first medical aid is located in Murom of the Vladimir region that corresponds to the middle geomagnetic latitude around 53°. The geophysical data were taken from the middle latitude geophysical observation Borok in Yaroslavl region. The observation is located on the same geomagnetic latitude 53° and on the same geomagnetic meridian 111°, which crosses Karelia and Scandinavia. Murom and Borok may be found in the projection of the plasmasphere on the Earth’s surface under the specifical geophysical conditions. The plasmasphere is one of the regions in the structure of the Earth’s magnetosphere. The plasmasphere is subject to dynamics depending on the geomagnetic activity. According to [4], the intensification of the high frequency oscillations of the magnetic field of the Earth (the high frequency geomagnetic pulsations) takes place in the plasmasphere. A systematic study of the geomagnetic pulsations in Russia was begun since International Geophysical Year [5].

The medical data given in the acticle contains the recordings of the call time of the first medical aid in connection with sudden attack cardio-vascular and neuros diseases. Analysis is made in each variety of the following cardio-vascular diseases: chronic ischemia deseas of heart, hypertonia deseas, hypertonia crisis, stenocardia, myocardial infarction and in the each variety of the following neuros diseases: vegetative-vascular dystonia, neuro-circulatory dystonia, bronchial astma, myoneurastenia, mental affection, psychosis, schizophrenia, insult. The medical data were chosen in accordance with the concrete magnetic storm because of the each case of the magnetospheric substorm is individual and does not repeat, according to [6]. The medical data were analysed in three time intervals: before the magnetic storm, during the magnetic storm, after the magnetic storm.

The work was submitted to International Scientific Conference «Fundamental and applied research in medicine», France (Paris), October, 14–21, 2012, came to the editorial office on 20.12.2012.