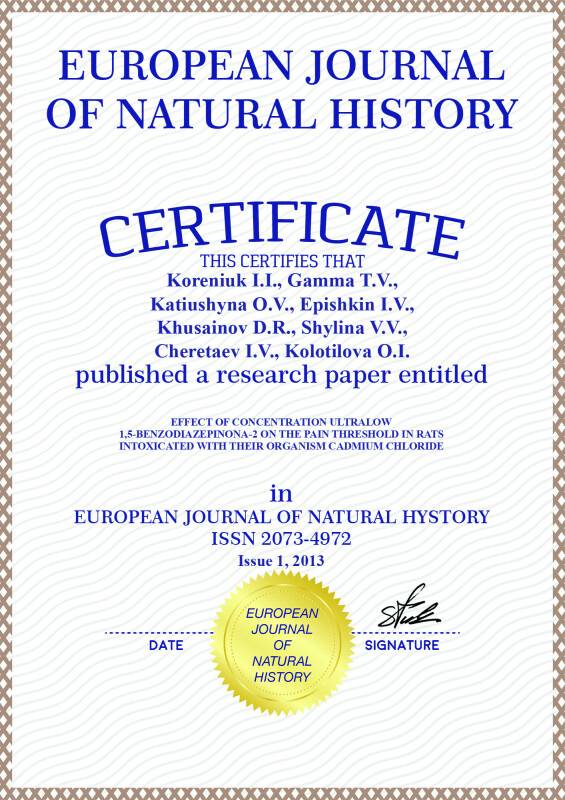 EFFECT OF CONCENTRATION ULTRALOW 1,5-BENZODIAZEPINONA-2 ON THE PAIN THRESHOLD IN RATS INTOXICATED WITH THEIR ORGANISM CADMIUM CHLORIDE

Certain substances benzodiazepine are found to retain their specific effect in the range of ultra-low concentrations (ULC) from 10–14 to 10–12 M without the side effects. Moreover, the magnitude and direction of their action depends from the dose of the substance as well as the functional state of the organism. For example, increasing the concentration of heavy metals in the body significantly alters its response to the effects of various pharmaceuticals. The aim of this work was to study the effect of 1,5-benzodiazepinon-2 (1,5-BDA) at the ULC on the pain threshold in rats against the background of cadmium chloride intoxication. The investigations were carried out on 70 white outbred male rats weighing between 230–250 grams. Control group of rats was injected with saline. Three groups of rats were injected during seven days intraperitoneally by cadmium chloride at a dose of 1 mg/kg, modulating accumulation of the metal in the organism tissues. Then these three groups and three groups of rats without intoxication were administered 0,2 ml of 1,5-BDA at concentrations 10–12, 10–13, 10–14 M. Analgesic effects were detected in the test «electrical stimulation», where the threshold of pain (TP) was determined. The results of the experiments were calculated statistically using Mann-Whitney U test. Under the action of 1,5-BDA at concentrations 10–12, 10–13, 10–14 M TP increased by 54, 48, 71 % (p ≤ 0,05), respectively, compared with the control, that is evidence of the presence analgesic effect of 1,5-BDA at the ULC. The intoxication of the cadmium chloride resulted decreasing pain sensitivity (TP increased only by 45 %), against the background of cadmium chloride intoxication the introduction 1,5-BDA increase even greater TP at all tested doses: by 169, 173 and 222 % (p ≤ 0,01) in comparison with the control. Also BP of these groups increased in comparison with the effect of the cadmium chloride by 124, 128 and 177 % (p ≤ 0,01) respectively. Thus, we have found that 1,5-BDA had analgesic effect at the ULC and dose-dependent analgesic effect was even more pronounced against the background of cadmium chloride intoxication.

The work is submitted to the International Scientific Conference «Modern science technology», Spain (Tenerife), November, 20-27, 2012, came to the editorial office on 14.11.2012.