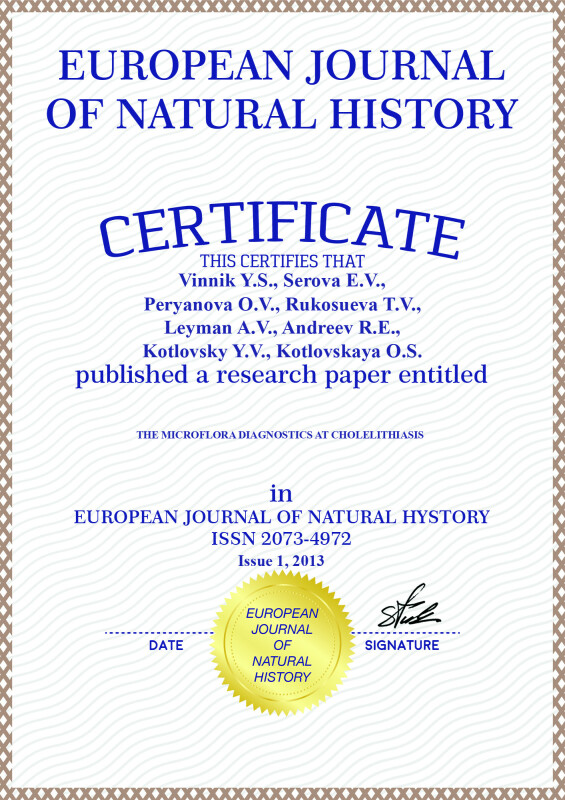 THE MICROFLORA DIAGNOSTICS AT CHOLELITHIASIS

Article in PDF
232 KB
The intestinal microflora and the hepatobiliary zone are played the significant role in the pathogenesis of the gallstone disease (GSD). However, the bacteriological studies results of the bile, in this pathology, are quite not always comparable. So, there are very few studies, having devoted to the anaerobic microorganisms and the anaerobic bacteria role study at the GSD, the significance of which the complicated forms of the cholelithiasis in the pathogenesis is large [2]. Moreover, there are no methods for the rapid diagnostics of the microbiological pathogents of the infectious process in the gall bladder. There are contradictory results of the bilicultures’ susceptibility definition to the antimicrobial and the antibacterial chemotherapy drugs [1, 3].
microflora
hepatobiliary
cholelithiasis
gallstone disease

The Study Objective: the medical treatment results improvement in the patients with the acute calculous cholecystitis (ACC).

The 125 patients with the acute calculous cholecystitis (ACC), at the age from 25 up to 80 years old have already been examined. So, the 97 (e.g.77,6 %) woman and the 28 (e.g. 22,4 %) men have already been involved in the medical examination study. So, the patients have already been divided into 2 main groups. The group 1 – these are the ACC patients, whom underwent the traditional conservative medical treatment before and after their surgery operations (e.g. 49 persons). The group 2 – these are the ACC patients, at whom underwent the etiotropic preoperative antibiotic prophylaxis, and the rational postoperative antibiotic prophylaxis (e.g. 76 persons).

The empirical antibacterial therapy has been prescribed by the cephalosporins of the III and IV generations of the aminoglycosides or the penicillin group agents for the patients of the group 1, depending on the time of illness onset and the severity of the clinical symptoms.

So, the preoperational antimicrobial prophylaxis has been administrated, with due regard for the PCR final results, having obtained during the first days just after admission to the hospital at the patients of the group 2. The patients of the group 2 have been received the rational antimicrobial therapy, having based on the PCR final results and the bacteriological study, in the postoperative period.

Thus, all the patients have already been operated, in connection with the ACC destructive forms, in the emergency or in the delayed manner, preferably using the video-laparoscopy and the mini – laparotomy access.

So, the microbiological research has been shown, that a high percentage of the seedings’ positive results has been obtained at the PHCC – 85,7 %, and the GCC – 84,2 %. When the AOCC, the microorganisms inoculation has been made up only 12,9 %. This is indicated on the short duration of the inflammatory process of the gall bladder, and on the contamination absence of the given biotype and the bio-inhabitant.

When the AOCC, the bacteriocholia has already been revealed and only at 4 (e.g. 12,9 %) patients, for all this, the E. coli, E. faecium, and Actinomiyces spp.have been also found at them.

So, the GCC has been characterized by the E. Coli separation from the patients’ bile, which is three times more, that the Enterococcus spp.

The microbial microflora of the biopsy materials and the tissue samplings by its qualitative and the quantitative compositions has not almost been differed from the bile’s microflora.

The Pseudomonas aeruginosa has been often stood at the PHCC – 20 %. Then, the microorganisms’ spectrum at the patients with PHCC has also been included the staphylococci (e.g. 20 %), in the quite equal shares – E. coli and E. faecium (e.g. 13,3 %); C. аlbicans, K. pneumoniae, Staphylococcus saprophyticus, Moraxella spp., and P. constellatus by 6,6 %, respectively.

The Gram-positive cocci are much more frequently found on the surface of the gall stones concrements, the share of which has been made up 63,7 % (including, the 36,4 % staphylococci, 27,3 % enterococci). By two types of bacteria have already been found on the gall stones concrements, only at the PHCC, and they have already been presented by the P. аeruginosa and S. epidermidis, C. аlbicans and S. epidermidis the microorganisms associations.

So, the biomaterials study has already been shown a high degree of the total bacterial contamination (e.g. 107–108 CFU/g) of all the samples at the quite different ACC histological forms, but more often with the abscess and the gangrenous ones. This is etiological role evidence of the already identified microorganisms in the inflammation development of the gall bladder.

The most frequently the P. aeruginosa culture has been isolated at the patients with the PHCC. It has been managed to be isolated the asporogenous anaerobic microorganisms in the monoculture – Peptococcus constellatus, with the severe clinical picture, due to the empyema development of the gall bladder and the local purulent peritonitis, at this form of the GSD, from the gall bladder and its wall content. However, it should to be noted, that the anaerobic microorganisms have not been identified yet in the similar clinical symptoms, having caused by not only the gall bladder empyema, but and also the peritonitis, the perivesical and the cervical infiltration, the perivesical abscess at the 48 (e.g. 85,7 %) patients with the PHCC, and at the 38 (e.g. 100 %) patients with the GCC.

Thus, the bacteriological research has been shown, that the representatives of the Enterobacteriaceae family (e.g. 61 %) have been dominated in the studied samples. Then, the E. faecium – 14 % are occupied the second place among all the isolated crops and the cultures. The Gram-positive cocci have been also presented by the S. epidermidis – 7,2 %, and by the anaerobic cocci P. constellatus – 3,6 %. The НГОБ Moraxella spp. and the Pseudomonas spp. specific weight has been made up 14,4 %.

The bile, the gall bladder’s wall, and the gall stones concrements at the patients with the quite various ACC forms have already been predominantly infected by the intestinal microflora. For all this, it is quite clear, the obvious relationship between the histological form of the inflammatory process in the gall bladder, the spectrum, and the microflora microorganisms quantity.

So, it has been revealed at the microflora study of the gale bladder by the PCR method that at the destructive ACC forms in the blood, the biopsy material and the tissue sample of the gall bladder’s wall, and in the bile, the anaerobic microorganisms DNA is found out.

The largest percentage of the identified monocrops and the monocultures of the anaerobic microorganisms has been obtained at the gall bladder study (e.g. 86,2 %), and the biopsy material and the tissue sample of the gall bladder’s wall (e.g. 92,1 %). This is the proof of the obtained pathognomonic results, and it, moreover, is indicated the absence of the false – positive results of these microorganisms identification, with the possible presence of the concomitant inflammatory processes.

Thus, in the monocrop and the monoculture, the anaerobes have already been identified only in the 144 (e.g. 69,6 %) samples.

So, the microbial associations have been presented in the 63 (e.g. 30,4 %) cases in the 6 special combinations. It had been found out, in the comparison of the anaerobes identification obtained results with the ACC histological form, that at the 72 patients’ examination, with the two groups at the 6 (e.g. 33,3 %) patients with the catarrhal cholecystitis, the Bacteroides fragilis, the Bacteroides spp. and the Fusobacterium spp. cultures and the crops were identified. It has been found out the most diverse and the severe microbal microflora at the 26 (e.g. 76,4 %) patients with the PHCC. Thus, the abscess or the phlegmonous cholecystitis is occupied the first place, in the anaerobic microorganisms variety, and the gangrenous cholecystitis – is on the second place.

It has been revealed the relationship between the number of the already identified anaerobes and the further development of the diverse and severe GSD complications at the analysis of the obtained results. The anaerobic microorganisms have already been revealed at the 47 (e.g. 81 %) patients from the 58 patients with the PHCC and the GCC. That is, there have been the diverse and severe perivesical complications at all these patients.

There have been only the 76 patients in the group 2, from whom the AOCC (e.g. the catarrhal cholecystitis) has been diagnosed at the 18 (e.g. 23,7 %) patients, the PHCC and the GCC with the diverse and severe complications – at the 58 (e.g. 76,3 %) patients. So, in all the cases, the aerobic, the anaerobic – optionally, and the anaerobic microflora have been identified in the mini-crop and the mini-culture, and also in the associations (e.g. by means of the bacteriological method and the PCR method).

So, the aerobic microflora has already been diagnosed by the bacteriological method, and the anaerobic one – in the 5,2 % cases in the group 2, in the 94,8 % cases. Then, the anaerobes have already been identified by the PCR method at the 56,9 % patients, which is quite significantly higher this indicator and its parameter, in comparison with the bacteriological method. The etiological role in the diverse, severe and complicated forms development of the gall stone disease (GSD) has been established in the 65,5 % cases by the PCR method, which is higher the similar indicator and its parameter at the catarrhal cholecystitis.

Thus, it can be assumed, that in the large percentage of the cases, the ACC are being developed the destructive forms and its diverse and severe complications at the anaerobic infection presence, which is often not diagnosed by the bacteriological method (see, the table 1).

The Microflora Identification at the ACC Complicated Forms

In the P. constellatus susceptibility determination to the antimicrobial agents and the drugs, it has been revealed, that all the separated strains of this species are quite resistible to the metronidazole – the drug, which is often used in the clinical practice, and, moreover, they are susceptible to the other agents and the drugs already studied.

Thus, the overwhelming majority of the microorganisms’ strains, having separated from the quite different ACC patients materials, are susceptible to the already studied antimicrobial agents and the drugs, which have already been included into the special form for the empirical antimicrobial chemotherapy, at this pathology condition.

As it is seen from the table 2, at the patients of the group 2, on the background of the medical treatment of the antimicrobial chemotherapy, by the final results of the determination, which have been measured by the susceptibility of the isolated microorganisms, in comparison with the group 1 (e.g. 15 (30,6 %)), it has been recorded significantly lower rate of the diverse and severe complications – 5 (e.g. 6,6 %).

1. The microbiological study at the patients with the acute calculous cholecystitis (ACC) is allowed to be determined the whole spectrum of the microorganisms (e.g. the aerobic, the anaerobic – optionally, and the anaerobic ones), and to be administrated the efficient etiotropic, rational antimicrobial chemotherapy.

2. The anaerobic microorganisms are one of the main etiological factors in the destructive forms development of the calculous cholecystitis (CC), that by the polymerase chain reaction (PCR) method are identified at the 38 (e.g. 65 %) patients.