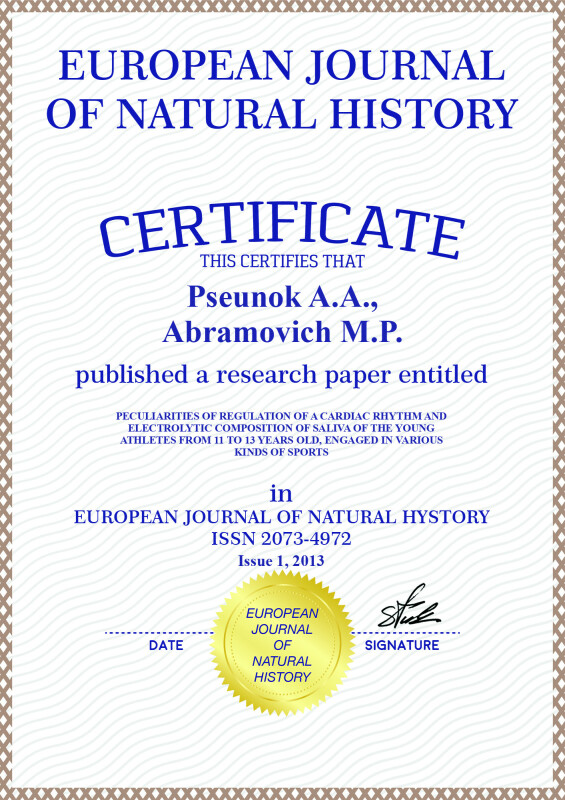 PECULIARITIES OF REGULATION OF A CARDIAC RHYTHM AND ELECTROLYTIC COMPOSITION OF SALIVA OF THE YOUNG ATHLETES FROM 11 TO 13 YEARS OLD, ENGAGED IN VARIOUS KINDS OF SPORTS

Article in PDF
211 KB
The research of peculiarities of adaptation reorganizations of direction structures and functioning of the cardiovascular system of the organism is one of the most actual problems of the age physiology. In connection with it the studies were carried out in longtudinal regime, that allowed us to assess the adaptive abilities of the organism. During the past two years the young athletes were examined on the basis of the olympic reserve school on sambo-wrestling and cycling. The definition of electrolytes was conducted in mixed saliva after a meal. The study of the rhythm of the heart rate was carried out according to the R.M. Baevsky’s methodology. The researches testify to the fact that the nature of the vegetative regulation and composition of the saliva change with the age and under the influence of sport. It is shown that the trained heart, in comparison with the untrained, has an influence on the sympathetic nervous system in the least degree and, in the greatest degree on the parasympathetic, that leads to the positive inotropic effect and increases the reserve opportunities of the heart. In terms of sports training young wrestlers have a voltage of adaptation mechanisms, that suggests a need for adjustment of the training regime. The voltage adaptation mechanisms develops as a consequence of failure of the functional reserves of the organism.
cardiac rhythm
electrolytic composition
saliva
sport

The study of peculiarities of vegetative regulation of a cardiac rhythm (CR) of the organism, its adaptive reserves is one of the most actual problems of the age physiology. The high functional level should be considered as a prerequisite of the high physical capacity for work, the potential ability of the organism effectively to adapt to the requirements of competition and training loads [3].

The investigation of peculiarities of functional adaptation of the persons, systematically exposed to specific physical loads of the large volume and intensity, is of great importance for the formation of the knowledge concerning of the basic physiological mechanisms of adaptation to different kinds of sports [7].

The sports activity suggests a continuous and an intensive work of the whole organism, as a result of which the athletes have characteristic for each kind of sport neurohumoral mechanisms of urgent and long-term adaptation, providing fast switching functions, aimed at the achievement of the maximum useful result [1, 7].

The research of the structure of the cardiac rhythm is of special interest in the age physiology to determine the roles of regulatory mechanisms of functioning of the cardiovascular system in the formation of the general and special training. In addition, the reliability of functioning of the organism depends largely on the balance of the electrolytes and their concentration in the biological liquids [4, 6].

The purpose of our research was to investigate the peculiarities of the vegetative regulation of a cardiac rhythm and ionic composition of the teenagers’ saliva from 11 to 13 years old, engaged in various kinds of sports.

The contingent of the research consists of young sportsmen at the age of 11–13 years old, engaged in a cyclical kind of sports – highways cycle and carbon – the struggle of sambo-wrestling in the number of 17 and 25 people, respectively. Classes had been holding in the specialized children-youthful sports schools of the Olympic reserve of the town Maikop for two hours five times a week. All subjects are regularly trained not less than three years, took part in city, regional, all-russia competitions. The control group consisted of schoolboys at the age of 11‒13 years old, trained in the traditional program of the traditional motoring (2 lessons per week). The research was conducted during the year.

We used the method of mathematical analysis of cardiac rhythm by R.M. Bаеvsky, according to which we evaluated a number of parameters such as: VS (variational scope), F (fashion), AF (the amplitude of fashion), IV (index voltage). The adaptive possibilities of athletes for the implementation of the dose of the physical activities (30 sit-ups for 30 s) are studied. It was conducted the study concentration of ions K+ and Na+ in saliva, defined photocolorimetric method with the help of photocolorimetr «KFK-3». For the research of the electrolytic composition of saliva we conducted the intake of the mouth fluid, which we received without stimulation, spitting out in the sterile Petri’s dish. Then the saliva of the mixed secretion centrifuged with the addition of reagents for the separation of the heavy fraction of the protein macromolecules. The data were processed with the methods of the mathematical statistics using the «Microsoft Excel XP» and was determined by Student’s t-criterion (P ≤ 0,05).

According to the results of research it was established that during the research period of the athletes racing cyclists had an increase in heart rate during the year. This can be explained by the increase of training loads connected with the upcoming competitions. Such a response to the physical strain testifies to the lack of the functional reserves. The athlete, after the batching of the measure load was observed short-term decrease of the heart rate below the initial values (from 67 beats/min up to 60 beats/min). This athlete regularly trained longer time (5 years), and showed higher sports results than others. Reduce heart rate leads to a decrease in oxygen consumption, change of biochemical processes in the myocardium. According to some literary data, it indicates the formation of bradycardia of this athlete [3, 7]. In our opinion, the mechanism of this phenomenon lies in the fact that in the process of long-term adaptation to stress of the dynamic nature is forming hypokinetic type of blood circulation, for which is typical small stroke volume in the presence bradycardia. This is fully consistent with the ideas about the field of economization of the functions, emerging as a «structural trace» in the process of long-term adaptation to the cyclical work of moderate power.

The Number of Na + in the saliva of the athletes-racing cyclists to the end of the study increased (table).

Notes: the significance of differences between the indicators of:

x – the beginning and middle of the year;

We assume that there is a reaction to a significant stress exposure. When the pressure increases angiotensin II begins to produce in the organism. In turn it is connected with the formation atrisodiumuretical factor (ASF), which increases the excretion of sodium, diuresis, reduces the volume of extracellular water and reduces the pressure. As excretion ASF is provided by the cells of the myocardium in response to mechanical stretching of the atria, it may indirectly speak about the positive inotropic effect on CR of the training load. Reaction of the organism with the participation of ASF can be considered as a protective, aimed not only at preventing a strong stress of raising arterial pressure, but also the weakening of the sympatho-adrenal activity [5]. Thus, cycling classes are a stress factor causing the reaction, containing specific (vasomotor) and non-specific (sympatho-adrenal) component. Apparently, the lack of the functional reserves of the growing organism of the young racing cyclists are compensated at the expense of an unspecified component, as evidenced by the dynamics of cations in the saliva.

The adolescents who are engaged in the fight of sambo, in the beginning of the year after the loading heart rate was significantly higher than in the rest, which is explained by their participation in the competitions of different level (P ≤ a 0,05) (look table).

Competitions are a great stress for the organism, as far as they are associated with significant emotional load. By the end of the experiment, a number of athletes with reduced adaptation resources is increasing, that testifies that functional capabilities of the organism do not conform the training regime. In this age, the organism’s reactions to stimuli of various kind are hyperactive [4]. Excessive training load can give rapid increase of the sporting results, but they will be too big «physiological price». The content of electrolytes in the saliva they have significantly higher than the young men engaged in cycling (P ≤ a 0,05) (look table). The high content of K+ is marked on the strengthening of the activity of the sympathetic nervous system and the central contour of the regulation. The concentration of ions of Na + is also increasing, that, apparently, says about the tension of the adaptation mechanisms, leading to the increase of the load on the heart muscle [6, 10]. This dynamics is the result not only of sports activity, but also the characteristics of the age stage. As it is known, in the 12–13 years of the age, the processes of puberty, leading to an increase in the activity of subcortical nerve centers of the hypothalamus and the pituitary gland, participating in the formation of a new hormonal status of the maturing of the organism.

No significant differences in the heart rate between the control group and groups of athletes have been identified. Analysis of other parameters of cardiac rhythm showed that, in comparison with the athletes racing cyclists the adolescents who are not engaged in sports sections, more pronounced sympathetic influence and reduced parasympathetic. This may be indicative of low functional reserves of the organism.

Thus, our research suggests that the nature of the vegetative regulation and the composition of the saliva change with the age and under the influence of sports.

A significant impact on the regulatory mechanisms have cycling classes. Changes of the physiological processes in connection with the execution of the training loads caused by the influence on the organism of the movements of a cyclical nature. Thus, in the first place, there are changes of the functional state of the locomotor system. The vegetative processes are being reconstructed under the influence of the irritations that indicate possible hypoxia, but mainly under the influence of the motor-visceral reflexes. As a result of physical loads in the process of long-term adaptation there are changes on different levels of hierarchy. The trained heart, in comparison with the untrained, has an influence on the sympathetic nervous system in the least degree and, in greatest degree the parasympathetic, which leads to the positive inotropic effect and increases the reserve opportunities of the heart. When planning the implementation of cyclic exercises processes of the age of the development of the propulsion system deserve a special attention. Therefore, when planning it is important to consider not only metabolic processes, but also age-related peculiarities of the regulation of movements and development of technology of motor skills.

Due to external stress impacts there are strengthening of the intensification of the activity of the highest vegetative centers, leading to the transition of the management functions to the lowest, autonomous levels up to the highest, central, as a result of excitation of the cortical and subcortical structures. The presence of athletes with a voltage of adaptation mechanisms in the group of wrestlers indicates the need for adjustment of the training regime. It is obvious that the joint training of the athletes of the same seniority classes, but different age does not provide sufficiently differentiated selection of the training load. According to some scientists, the voltage is not always explained by impacting factors, it can develop as a consequence of the failure of the functional reserves of the organism.

Installed features of the functional adaptation of boys 11 to 13 years old dictate the need for development and implementation of science-based prevention and health promotion activities, aimed at the normalization of the disordered functions of the regulation.