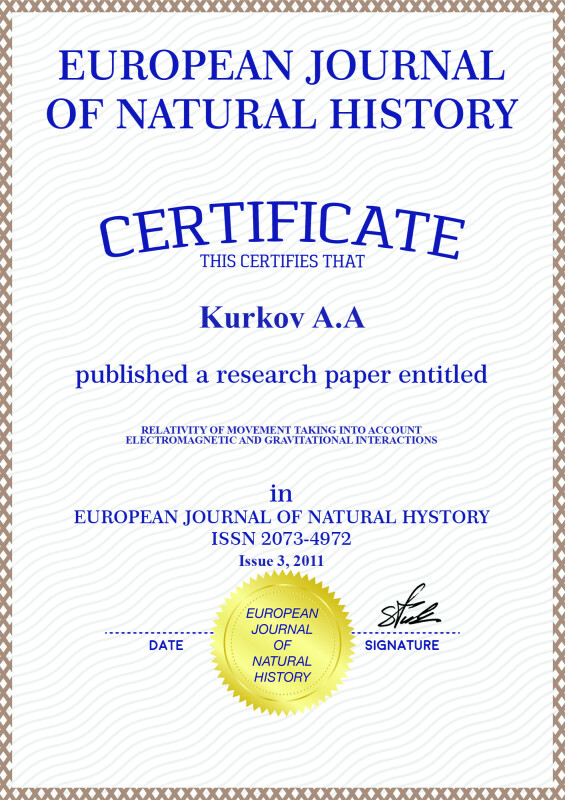 RELATIVITY OF MOVEMENT TAKING INTO ACCOUNT ELECTROMAGNETIC AND GRAVITATIONAL INTERACTIONS

If we stick a paper stripe on a rubber ribbon and start to stretch the rubber, the paper will start to break. Under the certain rubber tension only separate pieces of paper will remain on it. This is a mechanical example of the movement relativity that is studied in this article.

The common Universe attributes: body mass growth and linear growth of their size under the permanent entropy that equals K2 = (C/Vg)2.

From the electromagnet field theory by J. Maxwell we know, that light spreads with a permanent speed regardless of the reading system. As mentioned constants are calculated according to the Maxwell theory applied to gravity, the graviton will also have all the photon common attributes. Since photon has more speed comparing to graviton, from the moment of the Universe creation its borders (radius is a linear size) are defined by the light spread front. A photon cannot spread in any other way but through space, that is through gravitons. The Universe border moves with the light speed, and all space stretches along with that (like a rubber ribbon) in proportion to the scale. Such Universe is limited, locked on both interactions and has a permanent entropy that is linked to the relation between these interactions´ bearers.

In this work we do not study the mechanism of the Universe structures formation or other principles of its apparatus, but give the explanation of the outlined and observed by astronomers structures from the position of movement relativity. The observed structures hierarchy can be divided as follows: space bodies (stars and planets), linked associations of space bodies (planet systems, stars associations, and galaxies), and galactic associations (clusters, superclusters, and the whole Universe). The expansion (recession) speed is dependent on the linear size, that is connected to the mass constant GC. If the Universe structure is described only by two interactions (electromagnet and gravity), then the structure sizes and their masses are multiple of the constant K. We come up with a very simple rule: if the Universe mass is divided by K, we will obtain the supercluster mass and size. The bottom space body mass limit can approximately be valued according to relict radiation (the difference between a planet and «debris» is conditional), but even debris´ masses in asteroid zones and planet rings must correspond to this simple rule.

If we use the equation of S.U. Cary, that consider expansion and place the described constants into it we will understand the number of observed structures and their division according to attributes:

The first bracket in the formula corresponds to the universal gravitation law of I. Newton. The second bracket considers the Universe expansion, in which a relative speed is in degree 4. Here V is the expansion speed. If all four V = C, we will obtain the highest level 1 - the Universe. A sequent placement of V = Vg leads to the following structure level up to level 5 (table). For a galaxy (level 4) a recession speed is comparable to the graviton speed, so multiple galaxies and galaxies with satellites exist. On level 5 a replacement for all four stages is provided, so star associations are represented as multiple stars. Then follow space bodies. If their size is smaller than the wave length, linked gravity systems exist around them.

In [1] you can find more than 20 articles, among which the initial data is provided, as well as formulas and the results of new fundamental constants calculation and their values errors, and also the application of these constants in different science areas.

The work is submitted to the International Scientific Conference «Priorities for Science, technology and engineering», Italy (Rome-Florence), 10-17 April 2011, came to the editorial office on 08.02.2011.