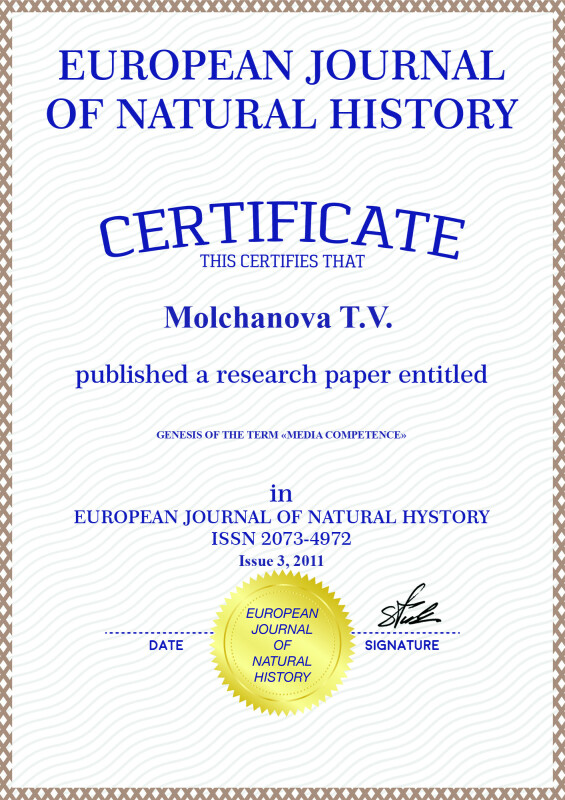 GENESIS OF THE TERM «MEDIA COMPETENCE»

Russian infrastructure needs competent staff. Nowadays this target is among the most important ones concerning development and competitiveness of the market. The rapid growth of scientific and technological progress and the obsolescence of knowledge reinforce the need for radical change in views on the problem of media education in Russia. The issue of its necessity, objectives, terminological apparatus etc. causes some controversy. The utility of its implementation in educational institutions and in universities is investigated. Many scholars proclaim that students should be competent not only in their future field, but also show such personal quality as media competence. This article investigates the etymology of the term «media competence» and the necessity of this qualitative characteristic of the individual to the student.

Let us turn to the term «media» (Lat. pl. medium - intermediate, mediator). Analysis of scientific literature has shown that it is treated differently. Thus, in the broad sense, they are the devices for recording, storing and transmitting information. Moreover, they are technological devices. Although in our opinion, this is not quite true. For example, the letter may also be such a medium.

The Doctor of pedagogical sciences, Professor Alexander Fedorov considers «media» to be technical means of creating, copying, printing, storage, distribution, perception and sharing it between the author of a media text and mass audience.

According to the Doctor of Philology, Professor Elena Vartanova, «media» are means of communication between different groups, individuals and the delivery of any content products to the audience.

From our point of view, these statements are concise and comprehensive. We add only that, firstly, media technologies have been with people for a long time. Secondly, the exchange of information is part and parcel of society, the media, respectively, are the most important means of communication, an indicator of progress. It is obvious that if we turn this amount of information in educational direction, we´ll have a very impressive result.

We now turn to the definitions of «competence» and «competency». They are of current interest in connection with the transition to the European standard of education. Study of a number of scientific studies on this subject shows: some researchers believe the two concepts to be synonymous. However, to our mind, they are not.

The term competency is now widely used thanks to the book «The competent manager. A Model for Effective Performance» by R. Boyatzis, written in 1982. He defined competency as the basic characteristic of a person. It may be a motive, characteristic, skill, social role, or the knowledge that he / she has.

Big Dictionary of Russian language treats it as scope of issues in which someone is knowledgeable or as terms of reference of any institution, person, or range of cases, issues to be someone else´s jurisdiction [2].

In the academic understanding competency assumes ownership of the methodology and terminology inherent in the field of knowledge, and knowledge of working in this system interactions´ area and the ability to determine their axiomatic limits. In the professional context, competence refers to possession of the right of his knowledge or authority to do or decide something, to judge anything.

It can be concluded that the concept of «competency» is considered as: personal qualities needed to perform certain functions, certain tasks, a system of knowledge, ability to act and conduct, structured depending on the purpose and the specific situation, a range of issues in which the person is well-versed.

We also note that the concept of «competency» is universal. It is used in various fields: politics, economics, and psychology etc. This concept is not new in education, not just abroad but also in domestic training methods. Recently one can find not a few dissertation researches investigating the formation and development of different types of students´ competencies in professional training.

Let us turn directly to the concept of «competence». Dictionaries of economic terms define it either as knowledge, experience in a particular area or an authority area of certain bodies and persons set by laws and other normative acts, regulations, instructions, statutes.

There is no common understanding of the term «competence» in pedagogical field at present. Thus, V.S. Bezrukova believes the competence to be possession of knowledge and skills that enable to state professionally competent judgements, estimates, opinions.

It turns out, the competent person, with respect to any area of activity, possesses certain knowledge and abilities that enable him to effectively work in it.  From the foregoing it can be concluded that competency is a part of competence, i. e. qualities of competitiveness. For each discipline they are different.

The same goes for media education. It seems that soon it will be included not only in overseas training programs but also in Russian ones. Therefore, it is necessary to have a unified terminological apparatus. Nowadays, unfortunately, it isn´t formed. Today there are many variants of the notion of even such a key term as «media competence». Both foreign and domestic scientists use the following synonyms: «media literacy», «media culture», «computer literacy», «information literacy» etc.

Let us define the two most often used as identical concepts: «media literacy» and «media competence». We turn to the glossary of terms written by Alexander Fedorov. Media literacy is the result of media education (V. Gura, A. Korochenskyi, V. Monastery, S. Penzin, L. Usenko, A.V. Fedorov, J. Pungente, I. Rother, D. Suess, Ch. Worsnop). Media competence of personality is the sum of its motives, knowledge, skills, abilities contributing to selection, use, critical analysis, evaluation, development and transfer of media texts in a variety of types, forms and genres, to the analysis of complex processes of media functioning in society (A.V. Fedorov) [4].

We adhere to the views of such respected scientists as D. Baake, S. Blumeke, I. Pottinger, A.V. Fedorov, who use the term «media competence». A.V. Fedorov proves very clearly the validity of using this particular definition in one of his works. He consistently argues that the term «literacy» reflects the first necessary step in learning, indicates a basic level of knowledge, while the term competence seems to be more targeted and specific in relation to the knowledge and skills of the person [3]. A.V. Fedorov says that the term «media competence» defines more accurately the essence of the existing individual´s ability to use, critically analyze, evaluate and transmit media messages in various types, forms and genres, to analyze the complex processes of media functioning in society [3].

To sum up, we arrive at the following conclusion: every minute we get the information - at workplace, in the learning process, during the holidays. Formation of media competent personality is pledge to work properly with information independently, which is one of the priorities of higher education and one of the six main principles of the Bologna Declaration.

The work is submitted to the International Scientific Conference «Actual problems of science and education», Cuba (Varadero), March 20-31th 2011, came to the editorial office оn 29.03.2011.