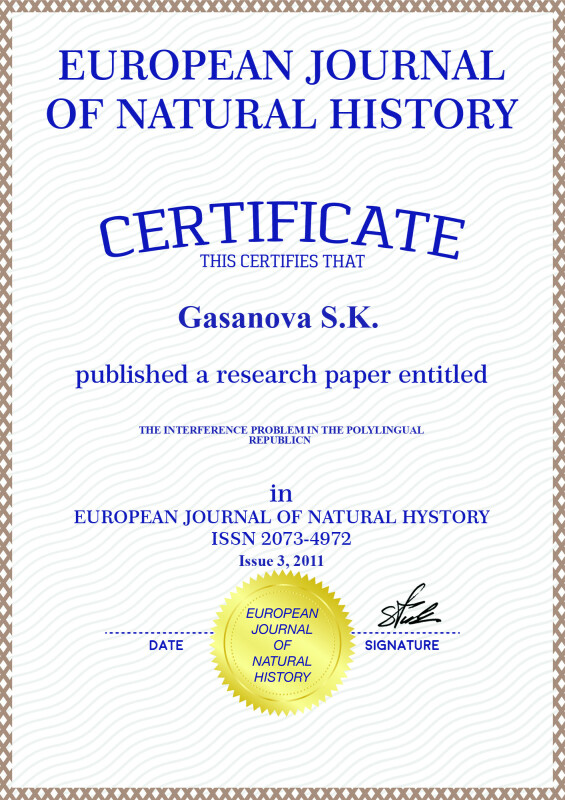 THE INTERFERENCE PROBLEM IN THE POLYLINGUAL REPUBLICN

Academician D.S. Likhachev wrote: «One should learn to speak fluently, quietly, refinely for a long time and attentively by listening, memorizing, observing, reading and studying. Our speech is the most important part of both our behavior and personality, our soul and mind, our ability to resist the environmental influences, if it is «addictive».

In other words, the whole long-term work on the development of the linguistic personality is accompanied by the formation of the orthoepic speech culture, but it is not some final stage of this work.

Bilingual persons´ Russian speech is characterized by the phonetic interference. The negative factors of the internal order include the complexity of the Russian language system for Dagestan people and the interfering effect of bilingual persons´ native language. The subordinative bilingualism carriers´ speech exhibits the following phenomena of the orthoepic interference:

- failure to distinguish the consonant softness-hardness and vowels after them и and ы: опити «опыты», страни «страны»;

- absent of reduction of the unstressed vowels, that is the equally full vowels pronunciation in all word syllables;

- replacement of the vowels, advanced to the zone of the iota articulation by the soft consonants, glottizied by the vowels: паьмаы «память», а нем «о нем»

From the sociolinguistic view-point, the main factor conditioning the phonetic-phonological interference is considered to be the lack of the development of the phonological consciousness and the phonetic hearing based on it. The bilingualism characteristic phenomenon is the rigidity, i.e. the difficulty of switching the mechanisms of the speech and thinking process and the vocal apparatus from the national speech to the Russian one and vice versa.

In our opinion, it is not quite right to make the communication effect be dependent on the degree of the interference relevance. Since firstly, the context compensates for any abnormality, and secondly, any interference phenomenon obstructs the communication, distracting the listener from the train of thought.

The bilingual persons´ pronouncing speech culture is affected not only the interference phenomena caused by specific features of his/her native language, but anomalies characteristic of other national languages. That is, Dagestan bilingual persons´ Russian speaking is influenced by the features of both their native language and other Dagestan languages.

The bilingual persons´ Russian speech culture is based on the adequate mastering the Russian language, its stylistics.

The only cause of the phonetic interference in bilinguals´ Russian speech in the science is considered to be the difference in the Russian and Dagestan phonological systems. But in Dagestan in bilingual persons´ Russian speech is influenced by features of other Dagestan languages. Often a bilingual person, who doesn´t speak the language of the other nationality, moves features of this language into the Russian speech. The reason for this fact may be the influence of other people´s, his/her parents´ interfered speech. It results in incorrect speech, not corresponding to the literary language norms.

The work is submitted to the International Scientific Conference «Science and education pressing questions», Moscow, 18-20th April 2011, came to the editorial office оn 01.04.2011.