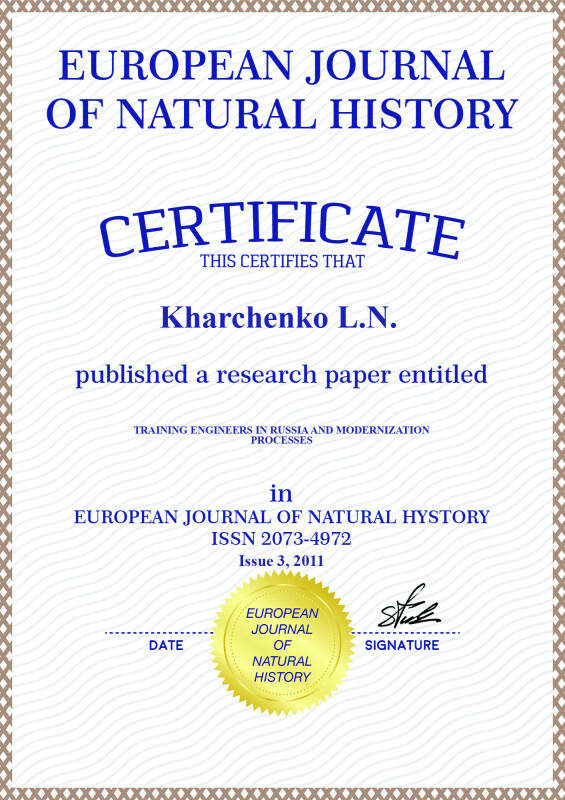 A need for engineering personnel is conditioned by an intense development of anthropogenic civilization, formation of which stated more than two centuries ago in European region. Some traditional societies that could not reform fast enough were simply absorbed by it, and others, including Russia, by interacting with it, started to alter dramatically fast, thus taking the direction for modernization and gradual transformation into anthropogenic societies. Since then a strategic objective of any state is its economical independence and prosperity that are directly linked to the technics development and introduction of new technologies. An uninterrupted functioning of an effective personnel training system is a necessary condition of this result achievement, as well as the development and opportune introduction of new technologies.

In the current year it has been 310 years since the foundation of engineer-technical and military education in Russia, when in 1701 the first school of «mathematic and navigation» science had been opened by Peter the First. Since then, modernization processes in Russia that are linked to the names of the greatest state activists, such as Aleksandr the Third, S.Y. Vitte, and others, were followed by reformations in education area, as not only the importance of qualified technical specialists´ training was realized by the authority, but necessary steps in this direction were taken as well. Old Russian technical school had a high image. It is commonly known, that in XIX century a great contribution into the training of engineers had been done by the mathematician M.V. Ostrogradskiy, the founder of automatic regulation theory I.A. Vyshnegradskiy, aerodynamic scientists N.E. Zhukovskiy, etc. Truly the breakthrough in the engineer-technical elite of Russian state was the foundation in 1899 of the Polytechnic institute in Sankt-Petersburg. Its scientific and education activity fully corresponded to the realization of industrialization objectives that arose before the country at the beginning of the new century. Its graduates contributed greatly into the development of the domestic science, by pointing out the most important magistral and research directions for the future (A.F. Joffe, P.L. Kapitsa, etc).

USSR engineering-technical school was also a state´s concern, as it solved the most significant specialists training objectives. Nevertheless, some critical moments are known in our history, when the country was threatened by a technological lag and significant efforts and, sometimes, even over-efforts were necessary to overcome a negative situation.

Russia had to face the necessity of global modernization on the border of XX-XXI century. Within the previous 20 years of its economic and social-political life some deep alterations took place and they affected all social life areas, including the education system. Here, as we speak of the education system, of course, we mean a whole complex of educational institutions that are logically linked to each other, first of all, by a mutual objective - training of competent well-qualified specialists; secondly - by the succession of educative programs and sequence in education trajectory projection; thirdly - by their inner coordination between time needs and the actual reality in the education area.

The main function of professional education institutions on the whole, and technical institutions in particular, is training specialists for the future. Today it is absolutely obvious that it takes the system too long to respond to the challenge of era. Nowadays a reformation within the domestic education system goes on. What can it give to the country within the problem of needed competent specialists for innovative development of the domestic economy.

Evident negative points of the modern education reform are linked to the fact it can become a time bomb for the system of engineering-technical personnel training.

The practice of the Single State Exam that has been introduced on the state level, significantly affects the modern school-leavers training that are simply coached for achieving a positive mark. The result is logical and consists in a significant basic knowledge decrease that stays with former school children when they enter universities. In this situation with the Single State Exam technical institutions suffer doubly, as less and less school-leavers select physics or mathematics as their exam subjects that are profiling disciplines in such institutions. Thus, a situation is created artificially that increases the students flow into the human science oriented institutions. And here an evident overproduction of economists, lawyers, psychologists, etc. takes place.

Besides, the Single State Exam system, with its visual positive side, such as an avowal of equal possibilities to obtain an education in any of the country´s institutions by any region citizens, has its obvious negative point - it pulls the strongest and most talented students from the regions, where young specialists do not tend to return.

Russia is a multinational country that has territories of significant extent that have to be developed and that can give our country the necessary power. That is why, while implementing an education reform, it is so important of think of regions as well. But the reformation gains power, and now on the pretext of school course loading decrease difficult disciplines such as physics and mathematics disappear from the general course, as they are no longer necessary. Reformers say that for a separate pay, mastering of these subjects is still possible. But who in regions will be able to pay for such expensive education starting with the early age? Obviously, a number of potential institution entrants will decrease.

In the current year domestic institutions must transfer to a two-step training system: bachelor and master. It will transform all the education into paid form. Under the terms of current unemployment and low wages far not each family will be able to afford a student upbringing. So, higher education will become less available and the country will lose its ability to train the necessary number of well-qualified specialists. If we accept a possibility of extensive domestic economy development and natural resources internationalization, then, possibly, the described situation is fully acceptable. We can also speak of another verges of the discussed problem.

Thus, modern era sets more questions before us, than it gives answers for the time deands. In nowadays situation it seems difficult to formulate a successful solution of the domestic economy modernization on the basis of innovative development without clear and organized actual education system, without securing the best tradition of Russian engineering school, without clear strategy and real measures aimed for leading the domestic economy out of the crisis.

The work is submitted to the International Scientific Conference «Actual problems of science and education», Cuba (Varadero), March 20-31th 2011, came to the editorial office оn 12.03.2011.