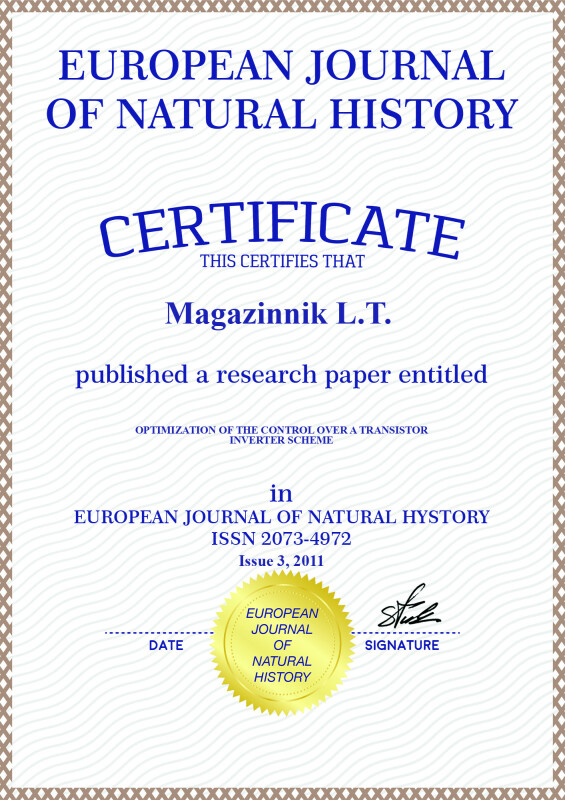 OPTIMIZATION OF THE CONTROL OVER A TRANSISTOR INVERTER SCHEME

A singlephax bridge transistor inverter can be used in varios secondary power supplies in a power range from tens of watts up to several kilowatts, instance in electrowelding devices, singlephas plasmotrones, electronic voltage stabilizers etc.

Secondary power supplies with inverters are divided into two groups: with a controllable inverter and with a noncontrollable one [1].

A singlephax noncontrollable bridge transistor inverter described in [1] is connected with an adjustable network rectifier with its own control and adjustment system via a direct current diagonal.The disadvantage of this device is that the unverter power transistor control system contains besides a typical oscillator of a given frequency and a synchronizing transformer,a shaper of porosity of controlling impulses operating on the principle of pulse-width modulation and an optoelectronic modular power transistor with an optoelectronic outcome. If makes the device more complicated and expensive as a whole.

A simplified scheme of a singlephas noncontrollable bridge transistor inverter is shown in Figure. The required output capacity of autooscillator 12 when the voltage of secondary windings 16, 17, 18, 19 of synchronizing oscillator 13 is (3...5) will be 2∙(3...5)iδ, where iδ is the current of unloching of power transistor: iδ = ik/α, where α - is the strengthening factor of a power transistor, and ik is the collector current (the «locing» current is negligibly small). It follows that if ik = 30 A, α = 15. The output capacity of autooscillator 12 is only