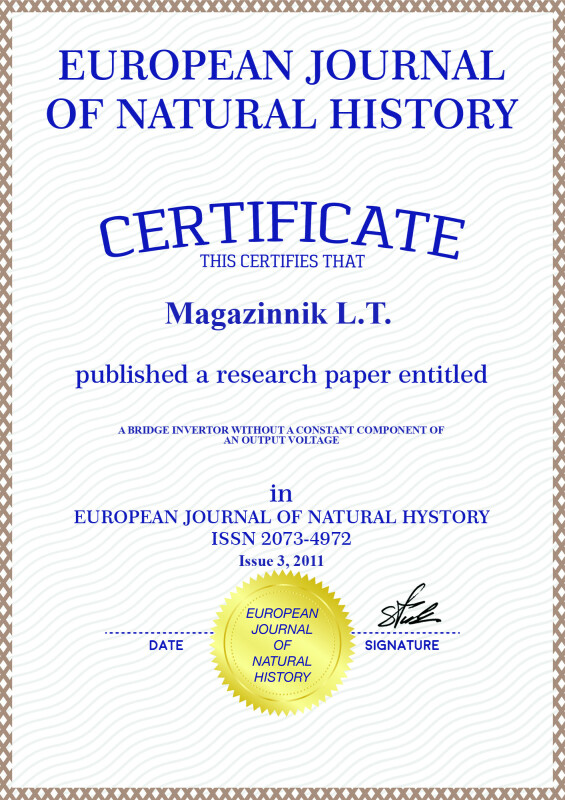 A BRIDGE INVERTOR WITHOUT A CONSTANT COMPONENT OF AN OUTPUT VOLTAGE

Article in PDF
231 KB
One- and two-cycle inverter circuits, their advantages and disadvantages are considered. A new bridge inverter circuit including additional low-current elements is offered. The device allows us to reduce dimensions of a power synchronizing transformer, dimensions of a smoothing choke, a magnetizing current and losses accordingly.
a galvanic outcome
an integrator
a comparator
a magnetizing current

Inverters in the installations listed are carried out under a single-stroke scheme that leads to inefficient use of a matching power transformer and a smoothing choke, to the necessity of having a transformer with an air clearance in the core and, consequently, to the increase of magnetization current and losses. The specified lacks are appreciably compensated by frequency increase of the converter, however losses in a semi-conductor part of the inverter (power transistor, diodes, snubbers) grow and the requirement to semiconductor base frequency characteristics increase. It results in the growth of cost.

A two-stroke scheme of the inverter (e.g. a semi-bride one [2]) is deprived of the abovementioned lacks of one-stroke schemes but provides an inefficient use of switching condensers and the main thing , a condenser built into an inverter power circuit causes nonlinearity of the external characteristics of a device. In [2] a two-stroke bridge scheme of an inverter where the efficiency of a switching transformer is 4 times as higher in comparison with a semi bridge scheme is presented , but a condenser built in series with a secondary winding of a power matching transformer results in voltage resonance and disables the scheme.

A «classical» two-stroke bridge inverter scheme with an inverse diode bridge [3] has the best characteristics. But when used for transformer loading it posesses the lacks stated above. The control of the inverter is usually carried out by means of pulse-width modulator, the typical one- and two-stroke schemes are given in [2, 3].

In any two-stroke scheme of an inverter without condensers an asymmetry in the output voltage curve in a power circuit is inevitable because of technical disorder of parameters of separate inverter elements and, as a consequence, a constant component in output voltage may appear. The latter in its turn, makes us to employ a power matching transformer with an air clearance. Dimensions and magnetization current of a transformer are increased accordingly and advantages of a two stroke-scheme over a one-stroke one are brought to naught.

The device scheme allowing to exclude a constant component in the inverter output voltage is presented in Figure.