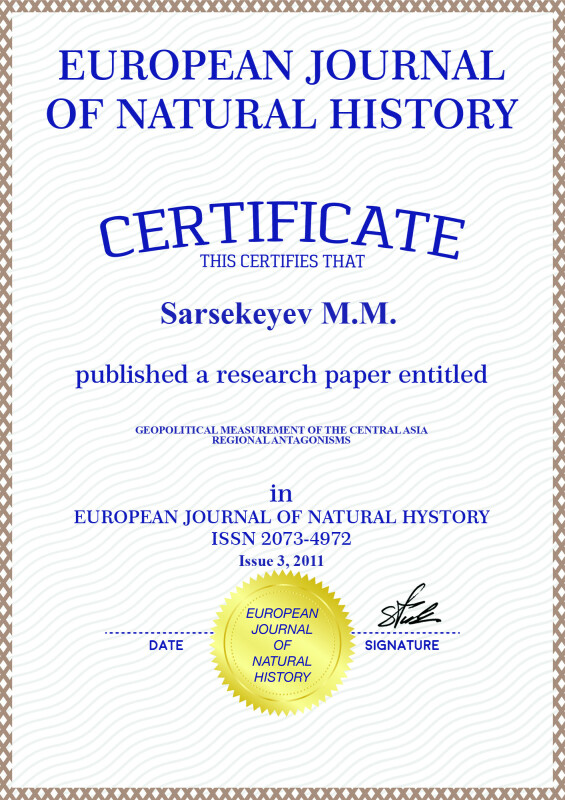 Article in PDF
187 KB
Some aspects of existing geopolitical influence factors reciprocal are studied in the article as well as separate political, ethnic, and geopolitical antagonisms in modern Central Asia. According to the author, a formation of such antagonisms is linked to both new political realities that formed after the Soviet Union collapse, and some fundamental historic-geographic factors. New geopolitical authority disposition basically determines domestic and regional political processes that have rather complicated structure of differently-aimed objectives and, at the same time, influence the appraisal of mutual regional problems.
geopolitical measurement
antagonism
Central Asia

After the world socialism system collapsed an era of two political influence centres war-strategic confrontation ended. It seemed that the formed double-pole world image only proved the axiom of not just two super-states, USSR and USA antagonism, but a contradiction between two world structures, views and ways of life, values and thoughts. However, the collapse of the «iron curtain» pushed both social thought and political practice, especially in post-soviet contries, to the search for new analysis and estimation of post-communist period political realities approaches. Particularly, an implementation of geopolitical science principles and methods to study separate regional problems provides for a deeper apprehension of undergone political processes in these countries.

Among different areas of the Central Asia states activity, the foreign-political direction plays the major role. In is linked to the unique geopolitical location of the region. A Central Asian peculiarity here is that the region is situated right in the middle of the huge Eurasian continent and is distant from the shores of the world ocean. Here on Kazakhstan territory is where the most distant from the ocean shores land point is located. It is situated approximately in the Notrth-east Seven-rivers region. There is no other place on the planet that is located on a bigger distance from an open-sea shore, than Central Asian territory [1].

In this relation two geopolitical constants have a significant impact on the region´s condition: areal location and geographical distance. Central Asia is surrounded by neighbor countries´ territories and in fact is an enclave region. Such position is complicated by the second circumstance - it suffers a great influence from its neighbor countries and, in particular, Russia and China. Sovereign foreign policy of the countries is significantly defined by their free access to so called open area of the world ocean and air space above it. For the region states this ability is seriously restricted. That is why for them a geopolitical direction implementation is strictly dictated by the existing geopolitical determinant.

No less important geopolitical facto significance index is economic relations. Created during the Soviet authority, national enterprise complex united scientific-technical, transport-communication, and production-technological economic area of different republics into one. A resources periphery role was played by the region´s economy within so called socialistic labor division system. It means that region´s economic infrastructure had expresses resource orientation. National economies of nowadays sovereign countries are still ones of the recipient type but are able to function in self- sufficient regime. In this case the region development without the creation of openly-functioning economies seem to be problematic at least because the consumer market of the region has little capacity because of its low purchasing power. Thus, during the independent period three post-soviet republics - Kirgizia, Uzbekistan, and Tadjikistan appeared to be the countries with low income level, Turkmenia - with income below the average level, and only Kazakhstan´s income is above the average level [2]. Therefore, geopolitical aspects of different Central Asian countries´ economies imply their active participation in the process of world-enterprise relations internationalization, undergo of the structure modernization in order to create modern economic branches found on the existing competitive advantages as well as strengthening of the regions integration to form new goods, services, and capital markets.

One more important factor that has a significant influence on the countries´ foreign political direction formation is the region´s place in geographic coordinate of modern world policy. If we look at the world political map, we can see the special feature of the region´s location in modern political space. From the outside on a significant part of its territory it is surrounded by the two largest territorial countries in the world - Russia and China. These states that pretend to become over-states in a short-time period with special global political interests are able to directly and indirectly influence the surrounded countries´ foreign policy that can significantly restrict the abilities of small neighbor countries to implement independent policy of the world arena.

If we speak of the foreign political influence factors coming from Russia to Kazakhstan for example, they are determined by the following geopolitical factors. Not so acute nowadays, but still actual problem of the «Northern territories». «Kazakhs consider Russians to be the Slavic minority in their country, while Russians organizations see them as an enclave within a bigger Slavic territory that include Russia, Ukraine, and Belarus» [3]. Interest to this problem is caused by the following geopolitical circumstances. A predominance of Russian population in the ethnic region structure that is in possession of rich natural resources and also has war-strategic interests that are linked to the maintenance of South-east Russian borders safety. So while defining its foreign political direction Kazakhstan cannot ignore these factors impact. However, it has its positive side. Two neighbor countries have ability to develop mutual profitable cooperation in economic, war-strategic, and scientific-culture areas. Another geopolitical constant that significantly influence relations between Russia and Kazakhstan is exposed in the territorial regulations factor. Great territorial extent of Russian from East to West and a significant mutual governmental border line restricts Kazakhstan´s abilities to carry out its foreign political direction m especially in the area of trade and economic interests where they appear to be competitors. For example, in the hydrocarbons and nonferrous minerals prospection and transportation area. For Kazakhstan great distance from their foreign trade partners directly increase not only economic, but also political costs that are linked to the geopolitical significance of its Northern neighbor. Russia always can, if it is necessary, take definite political decisions to restrict foreign economic Kazakhstan interactions with the third party, when Kremlin thinks that a serious damage to the Russian national interests is possible. The examples of the big Kaspian oil route definition export hydrocarbon, ferrous and nonferrous minerals that are supplied by Kazakhstan for the foreign market tariffs, and artificially long period of oil-pipeline Tengiz - Novorossiysk are just the confirmative facts.

The Chinese factor impact upon the region geopolitical situation is displayed differently. For example, the problem of water supply restrictions is especially actual for Kazakhstan. Major water arteries of Kazakhstan are transit rivers which origins are situated outside the country. Because of the number of reasons, these transit rivers regime is not regulated legislatively. So China´s location upper along the two greatest rivers channels - Irtysh and Il - gives it actual advantage in one-way water resource usage, particularly in defining the amount and regimen of its usage. Thus, after the start of Irtysh-Karamay channel in 2020 China plans to collect 1 bil. cubic metres of water from Irtysh each year while the total amount of the river drain is 9 bil. cubic metres [4]. Eastern Chinese borders are being roughly developed in economic area. It requires an increase in fresh water consumption. However, for Kazakhstan it can turn to be ecological cataclysm. Il or Irtysh shallowing will lead to the Balkhash dry out and northern regions will suffer fresh water deficit for production and household consumption. In totality with the Aral problems it can lead to full-scale ecological problems in the region.

Processes of population dynamics in Central Asia are becoming a serious geopolitical problem. If in some countries, like Kazakhstan a significant population decrease is obvious, in Uzbekistan we can observe its serious growth. A considerable demographic disbalance has already created some tensity within the region. However, a potential impact of the demographic factor coming from China can bear much more serious demographic consequences. Regardless of the birth restriction policy and high economic growth dynamics an acute surplus population problem is present in the country. «According to the official estimation the surplus labor in villages equals 150 million people, and the unemployed townsfolk - 16,2 million people, in other words, a total «unemployed army» in the country has exceeded 166 million people, 22 % of the population able to work» [5]. A huge mass of potential immigrants will not only shift within the country, but also look for a better living abroad. Though this problem is not sensed by the region so acutely, in close future it can become a high ethnological tensity factor.

New hotspots have added to former conflict hotbeds. Xinjiang, Fergana, Osh region, separate Tajikistan areas represent the instability zone, for which Afghanistan serves as a basis of instability, fed by some definite forces from the outside which are interested in the region´s political unsteadiness. As it adds to the common trend of the Islam role strengthening not only in religious-household, but also in politic-ideological area, a problem of national self-definition in the region might obtain the status of sacred fighting «unfaithful» not only outside the countries, but also within them. In case of further worsening of the Central Asia economic situation and subsequent impoverishment of the population majority slogans of the Islam state creation and calls to destroy soviet regimes can find support within the most of the Central Asian republics´ population. It is obvious that such prospects of the region instability strengthening that are linked to the geopolitical alteration in the politic authority disposition and dictate the necessity to strengthen both interstate and regional contries´ cooperation, international organizations, social movements in order to broaden mutually profitable international processes and security in dual-side format and on regional level.