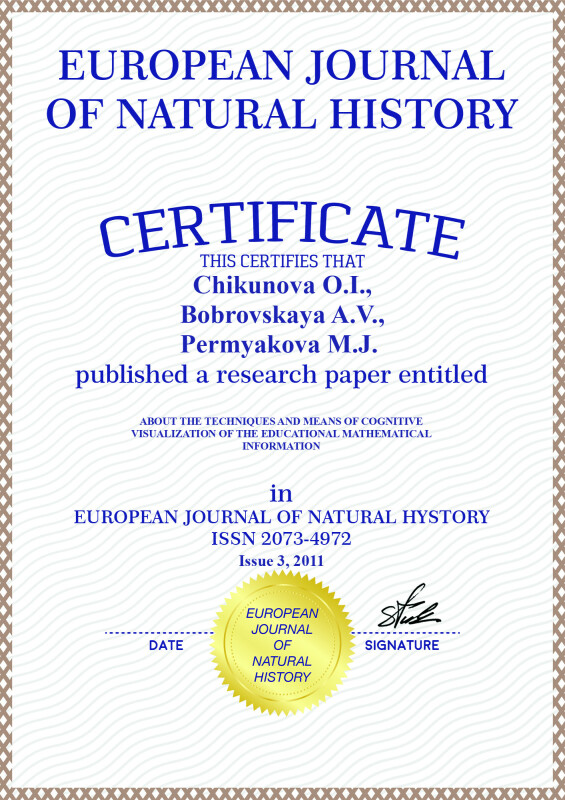 The formation of the high level of professional competence has become the basic requirement to a vocational training of the expert. It inevitably involves the change of traditional educational technologies, the transition to the interactive methods and the modes of study, qualitatively new tutorials.

The theoretical and experimental work of the authors in creation of teaching materials convinces that it is necessary to recognize the intensification of the educational process as a strategic direction of the increase of efficiency of students´ informative activity. In our opinion, for this purpose the performance of two interconnected conditions is necessary:

- the ergonomics of the educational information;

- the elimination of the irrational time expenses connected with the educational process.

The effective mastering of the information assumes using the system of visual and verbal means simultaneously. It is necessary not only for the subject action organization, but also for the allocation of the form and content relations, essence and phenomenon, the ability to model a situation. Figuratively presented information should increase the possibility of its preservation in memory and operating with it. Besides, the specificity of the mathematical content assumes the organic combination of both languages (visual and verbal), therefore it is important to find the optimum balance.

Designing of educational materials is based upon the principle of cognitive visualization according to which the visualization should carry out not simply illustrative function but also to promote the natural-intellectual process of new knowledge reception.

The product of cognitive visualization is the thoughtform generated by consciousness, which defines an unknown person, an unrecognized object (phenomenon), represented in the external plan of educational activity. Therefore working out of techniques and means of purposeful creation of thoughtforms in the course of educational-informative activity becomes the central problem of cognitive visualization.

According to the analysis spent by N.N. Manjko [1], we will list some important ways of visualization, essentially influencing the degree of activization and the dynamism of intellectual and educational activity while processing and mastering of information. They are:

- the concentration of information ( the basis of intensification);

- the expansion of roughly-presentational functions of visual didactic means (the presence of support);

- the algorithmization of educational-informative actions realized in visual means;

- a multicode presentation of the information.

Tabular-matrix structures. With the help of these cognitive visualization means at the expense of additional systemization and generalization, the educational information is condensed, concentrated. More often they serve for systemization of already studied material. However, they aren´t less effective while studying of a new material when they are presented incompletely or being designed (filled in) during the course of study. In the process of knowledge control, the tabular-matrix structures can be presented as matrix tests (matching tests) or classical tests of a choice. Tabular-matrix structures are also convenient for using of a multicode presentation of the educational information.

Flow-charts. They are characterized by a rigid structure of the represented material. The obligatory presence of each element of the scheme demonstrates the severity, symmetry and beauty, and also the cause-and-effect relationships of various elements of the educational content. With the help of these cognitive visualization means the generalization of representation of an intrinsic semantic core of the educational information is carried out. The flow-charts are used both in a theoretical part, and in mastering and controlling blocks, for example, as tasks for the description of algorithms of the problem decision.

Within the framework of mathematical courses students should master independently the sequence of actions during the solving of the basic classes of typical problems. In order to describe the process of the algebraic problem solution in training manual it is quite enough to point out and enumerate the steps of problem solution, but it is more difficult to do the same with a geometrical problem. In our opinion, one of the most effective ways of the visual description of dynamics of process of the geometrical problem solution is the graphic algorithm. It is based upon the principle of simplicity and a minimum of the verbal information. The problem solution is reduced to a series of the visual drawings (shots), reflecting the stages of its solution. Such representation allows to restore the process of the problem solution easily. Thus, the algorithm constructed in such a way, carries out not only the illustrative function, but also a cognitive one.

The graphic algorithm can be «sounded», i.e. the verbal information is placed near each drawing. Such types of algorithms can be used in tasks of two types:

1) the verbal information is available, it is necessary to restore the visual one;

2) the visual information is available, it is necessary to restore the verbal one.

Notably, the task can be offered both to the whole algorithm, and to its separate stages - drawings.

A variety of properties and action mechanisms, differentiation of forms and functions of visual means allows to include them into an educational activity taking into account the didactic expediency, educational problems, conditions and situations.

The techniques of representation of the educational information given above, allow to organize an educational material in an optimum way and to provide the professional competence formation of the future experts.

In particular, in the course of the long-term work we have realized that due to the considered techniques and ways of cognitive visualization in the educational mathematical information organization during the creation of training manuals and working out of training technologies, the following results were reached:

- the activization of educational-informative activity;

- the formation of the mechanism of self-development of the student´s personality;

- the initiation of the author´s style of the future teacher;

- the support of the modernization process of traditional technologies and innovative educational processes.

The work is submitted to the International Scientific Conference «Science and education pressing questions», Moscow, 18-20th April, 2011, came to the editorial office оn 10.03.2011.