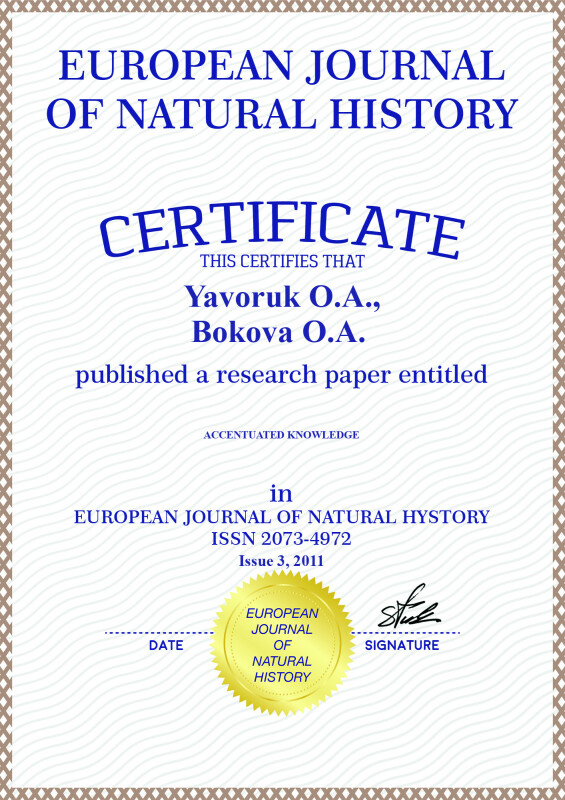 Article in PDF
165 KB
Nature of human knowledge is determined not only by its objective content but by relation of person to surrounding world concluded in it. Knowledge is a product of human activity and being created by person, it carries every aspect of human relation to surrounding world. The article deals with the concept «accentuated knowledge». Accentuations are clearly shown in knowledge, which person has.
knowledge; person; accentuation; accentuated knowledge

A person having knowledge sees problems where they exist. The one who knows much notices many problems. Defining the problem requires grandiose cogitative work, based on certain knowledge, but when careful clarifying of the essence of one or another question it is found out that there is no obvious solution. And the larger circle of knowledge about nature person has, the more unsolved problems he sees (one of knowledge functions - search of problems). Knowledge is necessary not to calm down and stop. Knowledge makes sense only as a tool of reception of new type of knowledge. A person aspiring to knowledge finds out everything new and his own lack of knowledge. This process expands in an avalanche and bewilders any rational epistemology (the more I know, the more I do not know): if to direct our knowledge about objective world toward infinity, our ignorance of it will direct toward infinity as well (if I know everything I know nothing).

Why to study the Nature, if it is impossible to study it? Why to learn incognizable? What for is it necessary to study natural sciences (first of all, physics), if this knowledge only increases ignorance and uncertainty? These issues are more and more frequently set by men, receiving secondary and higher education. And if in the process of studying humanities students receive knowledge concerning survival in the complex modern society, knowledge of physics, in many students´ opinion, is not in the least necessary for them. The question is important; therefore it is important to find the answer.

To the beginning of the XXI century people accumulated the large volume of knowledge about nature (natural-science knowledge). It is so large that to acquire it is beyond man´s power.

Nature of human knowledge is determined not only by its objective content but by relation of person to the surrounding world concluded in it. This problem has interesting special psychological component. In the one and the same text, containing the statement of some knowledge, we can accentuate it variously, selecting (exceeding, exaggerating) one or another aspect, selecting urgency and (powerfully) stressing them. The term «accentuation» is not new, it has linguistic origin. Accentuation is a system of accents in any language, designation of accents and rise of voice tone in the places of speech, requiring it. From linguistic area this scientific term was moved to psychology, and, so, got psychological and pedagogical meaning. For the first time about accentuations in a new terminological quality started talking K. Leonhard [2] expanding its content, keeping in view personalities and characters.

On the basis of long experience he singled out 10 types of accentuations, explaining their presence by disharmonious development of character with subsequent expressiveness of its separate features, understanding accentuations as extreme variant of norm. General theory of accentuations by K. Leonhard can find practical application in other areas of psychological and pedagogical sciences. Value of this issue turned out to be much wider and deeper than K.Leonhard and his followers assumed. The careful analysis of research array, devoted to the features of human knowledge, including scientific knowledge, forces us to single out and to substantiate the concept of «accentuated knowledge».

And the most honest researcher, studying one or another object, weighing the pros and cons before making some critical decision, deliberately or unconsciously, with passionate bias, for the sake of more or less strongly pronounced personal anomalies, selects arguments, formulates reasons in favour of desired result. And whatever expert´s educational level is, research problem is being solved not in favour of objective content of knowledge, but of imaginative blessing. And justification of own accentuated feelings, accentuated interests, accentuated predilections are searched in so-called «reasons of heart», and many reasonable arguments are considered by researcher to be not corresponding to the facts, to be opponent´s imagination.

But can researcher make a discovery without having accentuations at all? Presence of accentuated aspirations gives to the research idea large tension, breadth, acuteness, passion. An accentuated person is capable to penetrate into subject which is interesting for him much deeper than the other, indifferent one and developed without accentuations. Any activity is realized with strong will. Personal accentuations generate persistence and purposefulness, having therefore decisive importance for success and generating accentuated knowledge. Knowledge bears imprint of researcher´s character as it is him who extracted and expounded it. Any scientific article, any monograph, any manual is written by person. The unique impression of human mentality, like fingerprints, is contained in every of these products.

It is obvious that studying everything is impossible, for example, because of infinite variety of surrounding world and of any of its part. Even the same facts can have various subjective interpretations. And these interpretations may not only complement each other, they often contradict each other.

Objective knowledge of K. Popper [4] is accentuated too. Its third world, objective knowledge, is a certain system of logically organized statements, expressed in language, fixed in the texts, functioning in society as a product of human activity. But differently accentuated people, having read the same book, having listened the same lecture course, having passed the same examination and having even received the same mark, acquire different knowledge and different skills. This very phenomenon gives rise to the problem of mutual understanding. If this was not so, this problem would not exist.

So students´ knowledge of mastered disciplines (books, objects, phenomena, laws, theories, methods and so on) is different, since they took notice (accentuated, put accents) of different elements of the same knowledge being passed to them objectively. They perceive the same world in different ways. Even the well-trained experts (in the field of natural sciences, medicine, education, economy etc.) have disputes; moreover, they have basically different and sometimes opposing opinion about one and the same object. The reason of these disputes is differently accentuated knowledge.

It is possible to find phenomenon of knowledge accentuation in epistemology by Plato. Socrates (by Plato) talking with Theaetetus draws interlocutor´s attention first to the one, then to the other side of the discussed object (knowledge), showing advantages and disadvantages of one or another attempt to answer the question «What is knowledge?», also impressively exposing his personal accentuations [1].

Accentuation of knowledge mentally comes to light in facts of presence of «focus» and «periphery» of consciousness. We cannot simultaneously think about everything, decide all the problems at once. Transferring of focus of consciousness on various elements (parts) of the same knowledge allows us to understand the same thing in different ways. Cognitive process has a feature to be focused on various details, and result of knowledge depends radically on what details will remain in periphery of consciousness. We are calmed only by deep belief of M. Polany in the fact that the more cognitive process is focused on integer, the more it is subordinated to it, and the more functional knowledge of its elements becomes [3].

Any knowledge can get in focus, sometimes becoming obvious and actual absolutely unexpectedly. But what knowledge is most likely to get in focus clearly depends on personal features, especially on the strongly marked ones, on its accentuations.