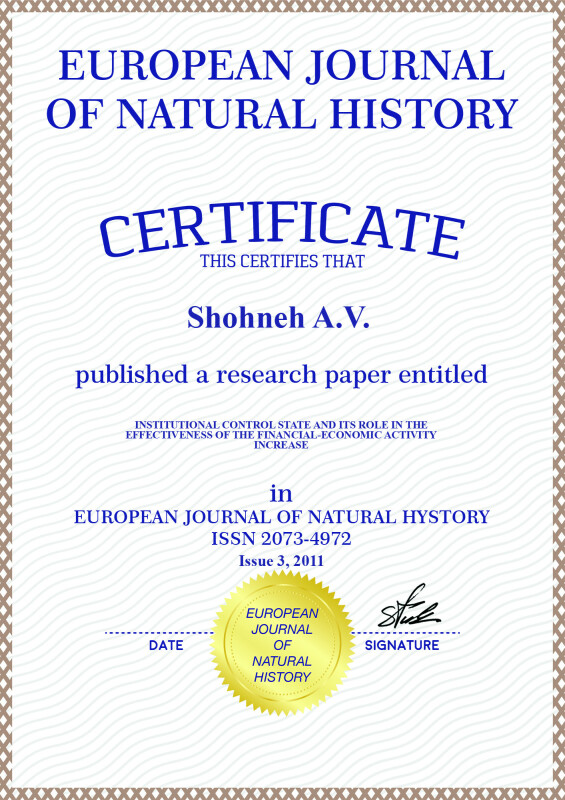 Article in PDF
200 KB
The problems of both individualized property and the system of the economic subject behavior control are studied in this article. The main elements of the control system are described. The control permissions groups of the controlling subject are outlined and, so are the corresponding control-processing rights, duties and the responsibilities of the controlled subject.
control
property institute
control elements
institutional
control system
power authorities
control expenses

The activity of any economic subject is possible only within the limits of institutionally-formed laws of property. Therefore, property as an economic institute (a tool of free property laws turnover between different economic subjects) defines sanctioned and authorized control rules and mechanisms within a society. And as it was registered in the Lim declaration of ruling control principles by the ninth Congress of international higher control bodies declaration in 1997: «The control organization is a necessary element of controlling social financial funds, as such control leads to a responsibility before the society» [3, p. 56].

The concept of institutional direction within which the neoinstitutional property laws economic theory emerged stays meaningful for a nowaday control problems evolution. Control is an element of superstructure above the system and is always developed along with the development of the social relations. The content of the control mechanisms is not permanent. Nowadays the difficulty of the economic property control mechanisms consists in the globalization of the economy, an integration into the world economic space. One of the main reasons of the control mechanisms difficulties is the creation of the offshore areas. «The opacity of the offshore companies property can stimulate an opportunistic behavior of those who control business in other countries through the offshores» [2, p.73].

The nowadays concept of the several property provides for the implementation of the direct or indirect control through the institutes that were specially created and those activity is regulated by the corresponding rules and regulations, by the owner. Thus, the economic authority and control are obliged to be commensurably combined within one or another property law system that exists within an economic subject.

An economic subject within modern Russian economy is an institute of the production organization, within which one of the institutionalization directions is actualized - the regulation and control. Institutional relations within the system of economic relations consists in the activity of the rules, order, limits output that limit the economic activity of the subjects in order to increase their activity results effectiveness. The control in this case can be studied as a complicated institutionally-orientated on microlevel system that is one of important structure components of the bigger system - the system of an economic subject control.

From the position of science the control is studied as a form of a feedback by which the controlling system gain the necessary information on the actual controlled object condition and the degree of the controlling relations realization (laws, acts, programmes, regulations, standards, rules, orders etc.).

It is reasonable to study the control content from two methodological positions:

1) control is a complex function and an inalienable part of the administration activity;

2) control is an independent administration process and an integral system.

One of the main reasons of the control implementation necessity consists in the fact that any organization, no doubt, is obliged to opportunely register its mistakes and correct them before they affect their goal achievement. The control does not only allow us to reveal the problems and correspond to them in order to achieve our goals, but also helps us to decide if we should introduce some radical alterations into our previous decisions.

The control essence is in the increase in the economic activity effectiveness.

An undergoing of any administrative activity assumes a presence of its implementation control system as a totality of various elements that are linked to each other and form a definite integrity, unity. The system presence is required to achieve the control goals.

It is reasonable to divide the control system as a complex of the following elements:

3) the matter of control;

The control system is a check environment within which subjects, objects, matter and means of control interact within a certain temporary limits.

Control field is the place of the control elements interaction where mutual relations, awareness, and the actions of the control subjects are aimed for an establishing of the correspondence between the achieved goals and accepted decisions degree and the evaluation of the control object condition according to the comparison between the set goal and the actual conditions, regulative means and corrective influences output.

The control subject is represented by agencies, organizations, subdivisions, and persons that carry out control functions and are the bearers of practical activity on the control implementation, rights and obligation s of which are regulated by normative-law acts.

Each control subject is provided with the corresponding power authorities that are necessary for the achievement of goal set before the administration. The multiplicity of bodies that carry out control activity allows us to outline the criterions of their systematization: according to the character of power authorities; organization-law forms of the control implementation; the direction of the control activity; the character of the connection between jurisdictional and organizational means of influence; jurisdictional consequences of the control; the control from governmental, municipal bodies and non-governmental bodies; the control from the law enforcement bodies [4, p.154].

The control implementation activity is always linked to the realization of the duties of the control subject. Therefore it is reasonable to outline the following groups of the control authorities of a control subject and ,accordingly, the corresponding control-process rights, duties, and responsibility of the controlled subjects: permissions for the control implementation on their own initiative unimpededly, any time within the limits of their authority; permissions to give obligatory guidances on the removal of the revealed violations and their consequences to the corresponding bodies and official persons in case of necessity; the permissions of the impleading of the guilty official persons; the permissions of the preventive recommendations output [1, p117].

The subjects represent the generative component of the legal relationship, and the objects characterize its essential side.

The means of control are represented by the methods, ways, and procedures that allow one to reveal and anticipate the emerging of the discrepancies with the actual legislation and accepted administration decisions in the condition of the control objects and matters.

Control acts as a inalienable part of the processes of all the human existence areas, and the anticipation of the possible mistakes, violations, alterations as well as the providing of the influence and suppression inevitability proportionally to the revealed alteration character are among its major goals.

The control process is the realization of tactical and strategic control goals and includes the following stages:

1) establishment of the reached level, standards, criterions and the condition of the objective accomplishment;

3) definition of the deviations reasons and implementation of the necessary corrective actions.

Along with that a whole complex of measures is realized at each stage.

A control is considered to be effective if it has strategic character, is aimed for reaching goals, well-timed, operative, exact, profitable, and effective. Therefore, it has to be solid and have real, not formal character.

A control must objectively evaluate that what is really important. Well-timing of a control consists in the time interval between the evaluation that sufficiently correspond to the controlled object. In order to be effective, a control should correspond to needs and abilities of people who interact with the control system and realize it.

According to the institutional theory of the firm an economic subject carries out an activity under conditions of two expenses types: the transaction expenses, that define the lower limit of the economic subject, or its minimal size and the control expenses that define its maximum size, or upper limit. Therefore, within the complex of the in-house costs, there are costs that are linked to the organization and functioning of the inner control system.