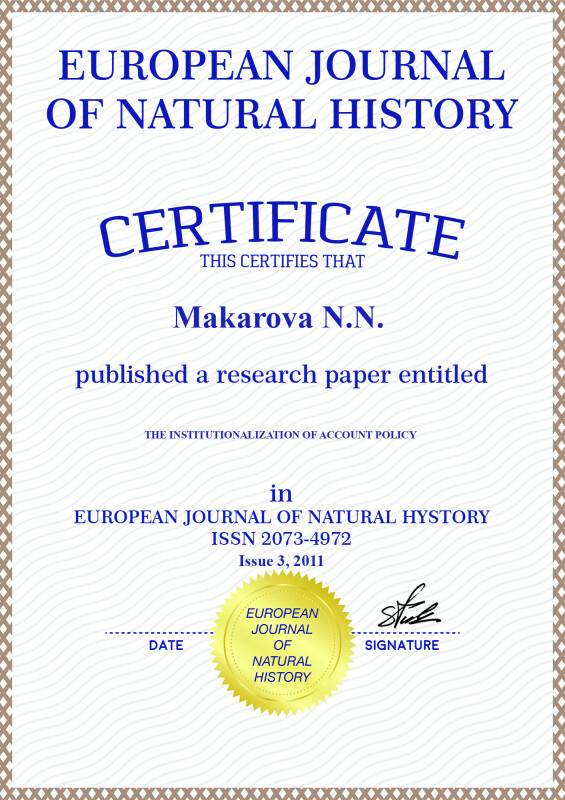 Nowadays there is tracked the strengthening of positions of institutional economic theory at the macro- and microeconomic level. Obedience or expressed by the individuals agreement to obey the determined limits promote the realization of institutional requirements at the conomic activity of subjects[1].

«The rule, which was institutionalized, is identified with the institute»[2], - there state J.-E. Lain and S. Ersson. Consequently, every economic subject has peculiar inside functional and cultural microinstitution, as the account policy. The complex of special chosen normative-legal rules, organizationally-technical norms, traditions, including traditions of relations and coordinations of account activity of its personnel, concerning them legitimacy, are unique for the economic subject.

From the position of institutional conception the forming of account policy as the system of inside normative documents, which regulate bookkeeping (financial, tax, administrative) account, promotes more effective use of possibilities of every system, which fits into conditions of active institutional sphere. The priority meaning for institutionalization of account policy of economic subject has the government (the influence is carried out through the normative acts by the questions of accounting and taxation), which should provide full correspondence of accounting and taxation to the action of market mechanism and creation for it the adequate conditions.

- the process of creation of the immanent organizationally-methodological institute, which provide the ordered functional structure with the hierarchy of power and rules of behavior while the presence of the stable differentiation of labour;

- the formation of defined rules and norms of methodology of account;

- the development and explanation of effective ways and methods, which are not foreseen by the legislation.

Interiorization of formal legal norms and rules of the «game». «Interiorization (passage from without to inside) is the process, the base task of which is introduction of new institutions into the routine activity of different subjects»[3]. The introduction of such microinstitution as the account policy requires the creation of defined standards of behavior of account personnel. Inside acceptance of the generally used professional principles means the making of the correspondent personality qualities of specialists, which are necessary for the regulation of behavior while reaching the decision, when choice is necessary. The standing of account policy promotes the consolidation of personnel of bookkeeping service of economic subject for the solving of problems of account from the view of carrying out of their professional activity in compliance with requirements, which are brought by government institutions. The organization of inside control, which is regulated by the standings of the account policy, with taking into consideration of accumulated experience and formed traditions provides the observance of the legislation at the sphere of accounting and taxation, requirements of account policy, including contractual.

Introduction of changes into the account policy (correction of norms and rules). The changes of account policy are carried out in cases: of change of legislation of RF or normative acts by the accounting; developments by the economic subject of new ways of carrying out of accounting (more reliable presentation of the facts of economic life or less laboriousness of account process without lowering of the degree of reliability of information); essential changes of activity conditions.

Corresponding to the p. 9 RAS 1/2008 «Account policy of organization» new rules should be used from the beginning of the year, because their different use should lead to the incommensurability of the facts of accountability. While the choice or development of the new ways of accounting, which were not earlier carried out by the economic subjects, they should be examined as addition, but not change of account policy. Then such ways of accounting should be used from the moment of their affirmation, but not from the further year.

The decision of introduction of changes into the account policy for the aims of taxation while the change of used methods of accounting is accepted from the beginning of the new tax period, and while the change of legislation of taxes and collection not earlier than from the moment of the carrying into of changes of norms of stated legislation[4].

Modern paradigm of basic directions at the studying of the in-house institutionalizm od account policy is based on:

- effectiveness of distribution of laws of property;

A.E. Shastitko gives following definition of the transaction costs: «Transation costs are the costs of resources (means, time, labour etc) for planning, adaptation and control of the carrying out of the taken by individual obligations at the process of alienation and appropriation of rights of property and freedom, which are accepted in the society»[5]. At the normative regulative by the accounting and in the taxing of RF there is no concept «transaction costs». By its essence the transaction costs are close to the costs of circulation, which were singled out by K. Marks. With the costs of production he also analyzed «the costs, which are necessary for that to turn costs from the commodity form into money one»[6]. While the examination of the process of forming of account policy there should be revealed the costs of reaching of decisions, which serve for reaching the optimum, to the bookkeeping, taxation, at the choice of type of concluded treaties and their defined conditions, which by their essence can be positioned as inside transaction costs.

The results of financially-economic activity reflect the effectiveness of distribution of the rights of property, at the result of which any act of exchange by competence is carried out in the limits of concluded contracts (treaty policy). It gives a possibility to approach to the institutionalization of the account policy from the position of treaty regulating of the processes of exchange of rights and realization of economic interests.

At the most complicated system of property the contract relations are inalienable, the most important component. The admission of alternative of contract interaction of economic subjects results from the structure of property rights. At the frames of contract the economic interests of subjects of management there take a form of legally meaningful rights and obligations in compliance with treaty policy.

[3] Istomin S.V. The peculiarities of institutional mechanisms at the transformed economy// The herald of Chelyabinsk state university. - 2010. - N6. - P. 54.