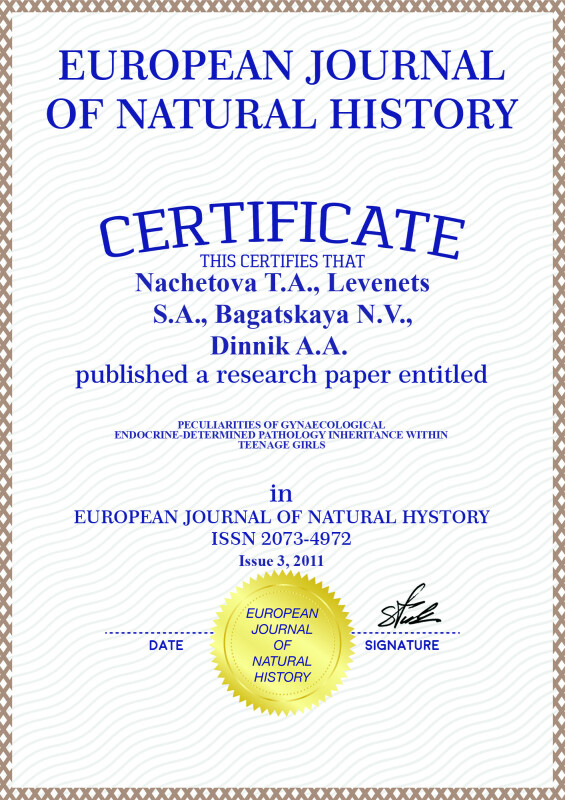 In recent years a steady increase in endocrine-determined gynaecological pathology within teenage has been registered. A search for new effective approaches to therapy and rehabilitation of girls with described pathology is closely linked to further deepening of our knowledge on disease emergence mechanisms and definition of genetic and environmental factors in its formation.

The goal of our work is to find out the type of gender development delay (GDD), oligomenorrhea (OM), pubertal uterine bleedings (PUB) inheritance type and contribution of genetic and environmental factors in the development of these nosological forms.

Family anamnesis of 356 teenage girls of 13-17 years has been studied. All patients had no less than one sister older than 17 years. In order to test the correspondance of the pathology to the monogenic inheritance segregation frequencies were calculated according to Weinberg formula, correspondence to multi-factoral inheritance was calculated according to correlation coefficients between relatives of the 1 kinship degree in accordance with quasicontinuous and alternative model. Correlation coefficients were used to decompose total phenotypical dispersion on environmental and genetic part.

Based on segregation frequencies calculation and comparison of difference between empiric and theoretical expected frequency of GDD, OM, and PUB inheritance hypothesis of monogenic inheritance was declined. The calculation of quasicontinuous GDD, OM, and PUB inheritance showed us the discrepancy of these models. While examining alternative hypothesis it was defined that for GDD genotypic component equals 0,75 and environmental - 0,25, while for PUB genotypic component equals 0,3 and environmental - 0,7, for OM - 0,17 and 0,83 correspondingly.

Thus it is determined that GDD, OM, and PMK are multi-factoral diseases, and for OM and PUB an impact of environmental factors turns out to be the most important and for GDD - genetic factor is the determinant one.

The work is submitted to the Scientific International Conference «Modern Problems of Experimental and Clinical Medicine», Thailand, 20-28 February 2011, came to the editorial office on 30.12.2010.