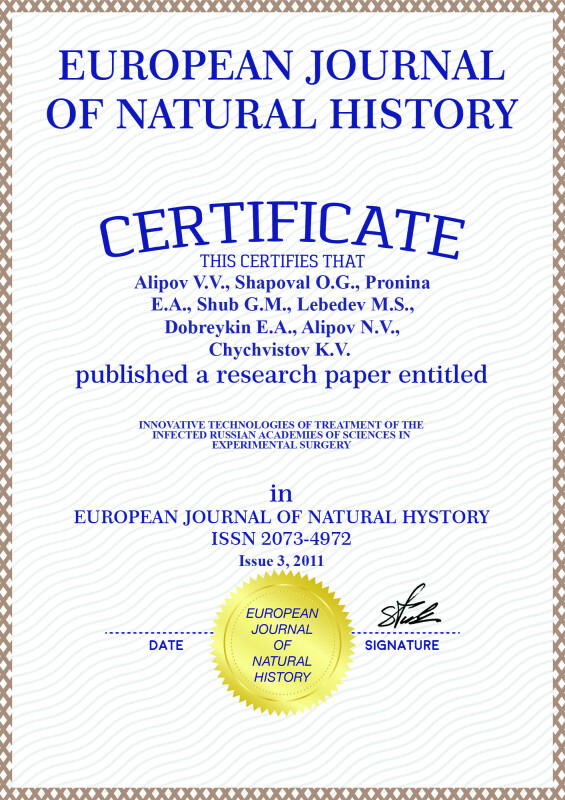 The aim of the research is to assess efficacy of the two new original ointments and electro-magnetic radiation at nitric oxide (150 HGz) absorption and radiation molecular spectrum frequency in experimental wound infection treatment.

Eight groups of white mice (10 mice in each group) were caused cutaneous back wounds which were infected with Pseudomonas aeruginosa clinical strain.

The experimental ointment №1 contained essential oils of fennel and amaranth, the ointment № 2 was different in additional element chloramphenicolum. The number of P. aeruginosa cells in the purulent discharge was studied by measuring of tenfold dilution seeding on meat infusion and by counting the number of colonies on the fourth, eighth and eleventh days of treatment.

It was determined that significant difference in the number of P. aeruginosa cells in the purulent discharge appeared on the eighth day of the treatment: its figures appeared to be lower than those in the control groups of mice treated with the ointments «Laevomecol» and № 2 as well as their combinations with electro-magnetic radiation.

On the twelfth day of treatment such dynamics continued with reliably lower number of microbial cells in the group treated with electro-magnetic radiation with the ointment № 2.

The use of electro-magnetic radiation at nitric oxide absorption and radiation molecular spectrum frequency with ointments containing essential oils of fennel and amaranth either with chloramphenicolum or without it improves efficiency of experimental P. aeruginosa infection treatment.