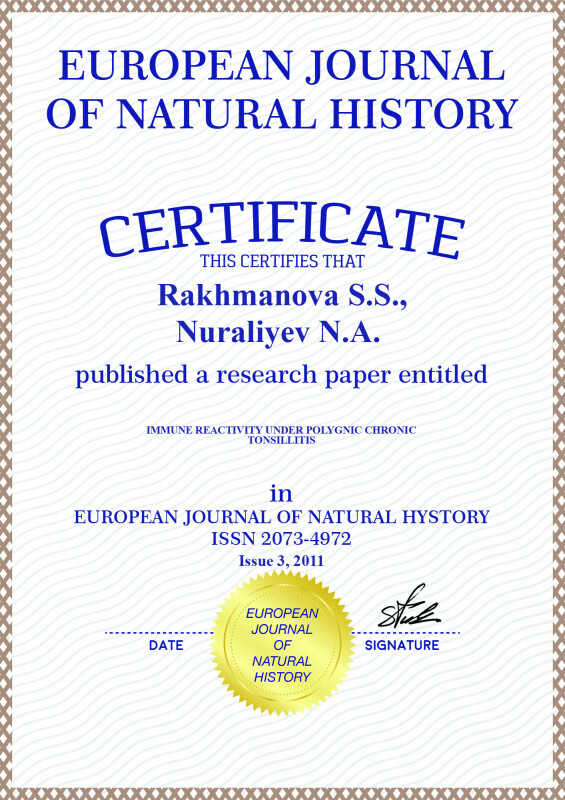 Article in PDF
218 KB
A microflora of pharynx and antimicrobial immunity indexes among 68 patients with chronic tonsillitis and 35 healthy persons were studied. Most frequently representatives of gram-positive flora were registered, dysbiosis of mucous memebranes was established among all inspected patients, sensitivity to cephalexin was high among the majority of S.pneumonіae, S.pyogenes, S.aureu, and Нaemophіlus sp. strains. A decrease in major indexes of antimicrobial immunity (PAN, PN, PPI) among patients allows us to judge on the expression of pathological process. Raised titles of anti-streptococcus antibodies were registered among 2/3 of patients.
tonsillitis
aetiological agents
microflora
phagocytosis
antibodies
resistance
immunity

Acute and chronic tonsillitises are one of the most commonly spread infection diseases [1, 3, 9]. Among adults a disturbance of palatine tonsils is typical, while for children adenoititis - an inflammation of throat tonsil is more common. Chronic diseases of ENT organs can be considered as a particular display of an immunodeficiency that is dependent by a defect in mononuclear phagocytosis system [1, 5].

The main bacterial tonsillitis stimulant is considered β - haemolytic streptococcus of group A, presesnce of which is registered among 31 % of patients [10]. Among other possible stimulants mentioned are streptococcuses of other groups, aurococcus, enterobacterias, haemophilus influenza [2, 6, 8, 9].

In human organism to a penetration of an microorganism from the environment first of all reacts its immune system, particularly phagocytosises and then antimicrobal antibodies are produced [5]. An organism´s condition and immune system are directly linked to a presence of infection inflammation in organisms. Among patients with acute and chronic purulent-inflammatory diseases a decrease in their organism´s resistancy - non-specific protection factors is registered [7].

In this case the objective of the present research is a complex study of a condition of pharynx microflora and antimicrobial immunity among patients with chronic tonsillitises in a comparative aspect.

68 patients (44 adults and 24 children) with chronic tonsillitis (CT) were under inspection. Children age was between 3 and 15 years, adults - from 16 to 45 years. Control group was formed from 35 healthy persons (20 adults and 15 children) whose sexual and age composition was representative to the main group. Patients´ inspection and diagnosis verification was carried out via standard methods that are accepted in the clinic of ENT organs diseases on basis of Khoremzskiy regional multi-profile medical centre of Uzbekistan Republic.

Pharynx and nasopharyngeal mucus microflora was studied according to commonly-accepted bacteriological methods: material collection, sowing into nutritious environments, discharge of clean micro-organisms´ culture and its identification. Identification was carried out in accordance with guides and determiners Bergey,s; Manual of Systematic Bacteriology (1997). Microbiological research of nasopharynx and pharunx abstract was carried out before treatment and 3 days after the end of taking antimicrobial preparations.

Phagocytosis activity of neutrophils (PAN) of periphery blood was defined via conventional method, based on their ability to absorb micro-organisms with a calculation of microbes absorption percentage - phagocytosis number (PN) and phagocytisis protection index (PPI). As a testing microbe we used day cultures of E.сoli, S.аureus and β-haemolytic streptococcus of group A. PPI criterion was used to ectimate functional activity of phagocytosis. PPI results were estimated in dependence on phagocytisis completeness in 2 groups: PPI < 50 % and PPI > 50 % (PPI degree criterions). The level of anti-streptococcus antibodies in blood serum was revealed with indirect hemagglutination test with a commercial erythrocytic diagnosticum by the conventional method. Statistic processing of the material was carried out in accordance with commonly-accepted methods with usage of applications for medic-biological discilplines.

During bacteriological research of nasoparynx mucus specific composition of the higher breath tracts was quite diverse in comparison with indexes of microbiological studies of deep tonsil departments (p > 0,05). The obtained results of microbiological research of both biotypes among patients with CT allows us to conclude that microbal picture under CT is characterized by the diversity of gram-positive and gram-negative microflora sowing ability and this pathology differs from other nosological units by its bacterial polygenecy.

Along with microbiological research we have carried out a study of the main antimicrobial immunity indicators of the CT patient in a comparative aspect.

The results of the CT patients´ inspection and the control group have shown a reliable decrease in natural protection factors with a decrease in PAN. The research has found out that among patients a reduction in this indicator is registered, especially with E.coli (43,1 ± 0,6 % against 59,4 ± 0,7 % in the control), and also with other studied micro-organisms (table 1).

Indicators of phagocytosis activity of neutrofils among patients with CT

The study of microbes´ absorption percentage (PN) has shown that PN with E.coli equaled in average 6,1 ± 1,0 units, with S.аureus this index equaled 5,7 ± 0,8 units, and PN with β-haemolytic streptococcus of group A equaled in average 3,7 ± 0,4 units that is reliably lower than the control and other micro-organisms indexes, described above.

Index of phagocytosis completeness among patients with CT ( %)

Our attention draws the fact that PPI dramatically decreases among patients against the healthy. Probably, it is linked to a decrease in the general immune system, and insolvency of the phagocytosis system is another criterion of a pathological process chronisation under CT.

Usage of an organism´s non-specific resistance - PPI and PN as an estimation criterion with different testing microbes among patients with CT allowed us to study their reliable difference in comparison to β-haemolytic streptococcus of group A (р < 0,05). The revealed PPI is lower than 50 % among 68,0 ± 2,0 % of patients and the decrease in PN with β-haemolytic streptococcus of group A in comparison to the control (2,4 times), to E.coli (1,7 times), and S.aureus (1,5 times) shows us an insolvency of phagocytosis activity among adult patients with CT.

To reveal alterations in antimicrobial immunity under CT in relation with age, an analysis of these indexes was carried out according to age groups of adults (under 20, from 20 to 30, from 30 to 45 years old) and children. No reliable difference was established between age groups in their levels of the studied parameters (р > 0,05).

A powerful factor that provides for an antimicrobial immunity are antibodies that participate in capturing and elimination of microbal antibodies and their endotoxins. Considering an important place of β-haemolytic streptococcus of group A in pathogenesis and chronisation of processes in tonsillitis we studied a revelation level of anti-streptococcus antibodies among patients with CT of different ages (table 3).

Indexes of revelation frequency of anti-streptococcus antibodies among patients with CT in the disease dynamics, %

1. Among patients with CT from biomaterial the most frequently discharge representatives of gram-positive, dependently-pathogenic microflora, a disbalance in the composition of normal mucous memebranes microflora is established among all inspected patients, sensitivity to cephalexin was high among the majority of S.pneumonіae, S.pyogenes, S.aureus, Нaemophіlus sp. strains.

2. A decrease in major indexes of antimicrobial immunity system (PAN, PN, PPI) under CT among patients allows us to judge on the expression of a pathological process.

3. Usage of non-specific organism resistance index - PPI as an estimation criterion with different microbes among patients with CT allowed us to establish its reliable difference in comparison to β-haemolytic streptococcus of group A.

4. The revealed raised titles of anti-streptococcus antibodies in blood serum of patients with CT in comparison to the control that were registered among 2/3 of the inspected shows us a strain in the immune system of patients.