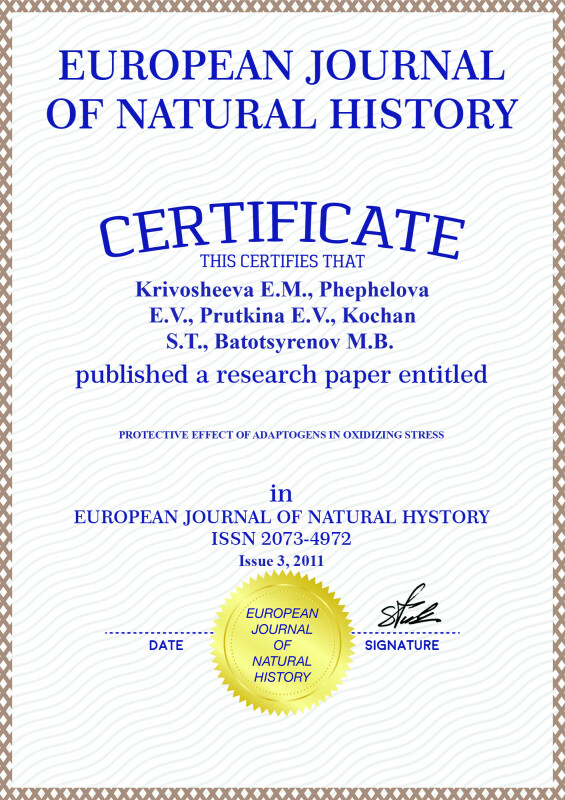 Article in PDF
188 KB
As the title implies the article describes an experimental investigation of vegetable adaptogenes influence of Euphorbia Fisher extract and tincture on hemostasis, endothelium dysfunction, lipid peroxidation and antioxidant protection activity, the investigation of lymphocytic thrombocytic adhesion in normobarric hypercapnic hypoxia, normoxia and experimental hypernomocysteinemia. The experiment included 200 while laboratoris rast (mean weight 16 ± 20 gr.) engaged in the trial were divided into 9 groups. Medicines were injected intraperitoneally during 7 days, half of enimals were subjected to hypoxia influence. The data obtained testify a marked antioxidant properties of medications under discussion from Fischeriana root. Euphorbia Fischer root medications inhibit lymphocytic thrombocytic adhesion and therefore they regulate aggregative thrombocytic properties. In hypernomocysteinemia and hypoxia the most significant effect was observer in Euphorbia Fischeriana elixir intervention and it was more than 2 times higher than in Euphorbia Fischeriana tincture.
adaptogens
Euphorbia Fischer
hemostasis
endothelium dysfunction
lipid peroxidation
antioxidant protection activity
the investigation of lymphocytic thrombocytic adhesion
normobarric hypoxia
hypernomocysteinemia

One of the most significant mechanisms promoting ischemic heart diseases is endothelium dysfunction playing a causal role [9]. In modern cardiology oxidizing stress is a key process included in intracellular accumulation of free radicals strictly affecting endotheliocytes integrity and function [15]. Thrombocytes play a key role in inflammatory reactions, immunity and atherosclerosis development [6]. This process is realized by releasing proinflammatory mediators and expressing surface molecules that may contact with other blood cells and endothelium. Substances secreted and expressed by thrombocytes have a wide range factors effecting intercellular adhesion, cells migration through vessels endothelium and are known to play an important role of specific signals for target cells [11, 14]. Adhesion interaction between thrombocytes and leucocytes ensures leucocytes discharge to foci of inflammatory and immune reactions. Different factors may initiate these processes including hyperhomocysteinemia and hypoxia [4].

Despite numerous studies in this field general principals of endothelium dysfunction correction were not defined and medications removing the results of oxidizing stress were not found [2, 3, 8]. An increasing demand for these medicinal plants and herbs is mainly associated with the fact that chemical nature of these plants and herbs is close to the human organism and they are easily included into biochemical processes of a human being acting gently and safely continuously regulating all vital processes of a man.

The aim of our study was to find out perspective medications from plants and herbs to corrct endothelium dysfunction in experimental normobarric hypoxia and experimental hyperhomocysteinemia. In our experimental work we carried out complex evaluation of their effect on hemostasis level, lipid peroxidation processes and antioxidant protection, endothelium function the investigation of lymphocytic thrombocytic adhesion in normoxia, hypoxia and experimental hyperhomocysteinemia. From all vegetable plants we selected remedies on the basis of Euphorbia Fischeriana Stend. of Zabaikalia. Euphorbia Fischeriana is used in the treatment of oncological diseases, tuberculosis, furunculosis, burn disease, chronic lung diseases, impotency, prostate adenoma, anemia of any genesis [1].

200 white experimental rats (mean weight 167 ± 20 gr.) ingaged in the trial were divided into 9 groups to evaluate hemostasis, endothelium dysfunction, lipid peroxidation and antioxidant protection activity in normal state, in hypercapnic hypoxia and experimental hyperhomocysteinemia. The experimental hyperhomocysteinemia was obtained by intraperitoneal injection of hemocystein solution of 0,001 mg/ml that is 0,1 ml of the total blood circulating volume. Hyperhomocysteinemia was confirmed by highly effective liquid chromatography. All experimental animals received the medications under study for 7 days. The doses of euphorbia Pallasi elixir and tincture were preliminary defined by acute toxicity and comprised 0,1 ml/100 gr of body weight intraperitoneally. The control animals were given the same quantity of isotonic sodium chloride solution. Hypercapnic normoborric hypoxia was designed by Kovalyev G.V., (1990) in pressurized camera [5].

Statistical calculation of the data obtained was performed by Fisher-Student method using Statistica 5.5.

Change in NO concentration is one of the markers of endothelium damage. NO level was evaluated by NO3 quantity [2] as NO is chemically unstable compound existing only some seconds. In rats all substances under study caused the elevated NO3 level in normoxia, the Euphorbia Fischeriana tincture raised NO level by 57 %.

Reduced lymphocytic thrombocytic adhesion activity in normobarric hypercapnic hypoxia may be caused by decreased NO concentration which is known to inhibit lymphocytic thrombocytic adhesion [2]. Earlier we established that in normobarric hypercapnic hypoxia NO reduction takes place but in hypoxia under the influence of Euphorbia Fisher extract and tincture NO concentration has15-13 increase respectively.

T-helpers and natural killers are known to form rosella with thrombocytes therefore the maximum lymphocytic thrombocytic adhesion intensivity may be not more than 60 % but in modulating hyperhomocysteinemia we received higher numbers. It might be explained by damaged homocystein effect on cells or nonspecific receptors expression for thrombocytes by another lymphocytes subpopulation.

All the medications studied blocked lipid peroxidation processes and activated antioxidant protection. The medications from Euphorbia Fischeriana root appear to have antioxidant properties due to a high level of antioxidants. Thus, according to Teleatjev V.V., Euphorbia Fischeriana roots contain flavonoids, saponins, glycosides, selkenium, traces of anthracenederived substances, ascorbic acid [1, 7]. Our studies suppose antioxidant mechanism of flavonoids to be bases on ability to defense capillary walls from radicals damage by neutralization of oxygen active forms and break of free radicals reaction chains according to [13]. Besides flavonoids selenium effects significantly antioxidant activity and is a constituent element of selenium dependent glutationperoxidase inactivating oxygen active forms. Hence, hemostasis and endothelium function reduction in hypoxia and hyperhomocysteinemia by medications under study may account for decrease of damaged effect of oxidizing stress on endotheliocytes [10, 12, 15]. Euphorbia Fischeriana roots have the most significant protective efficacy.