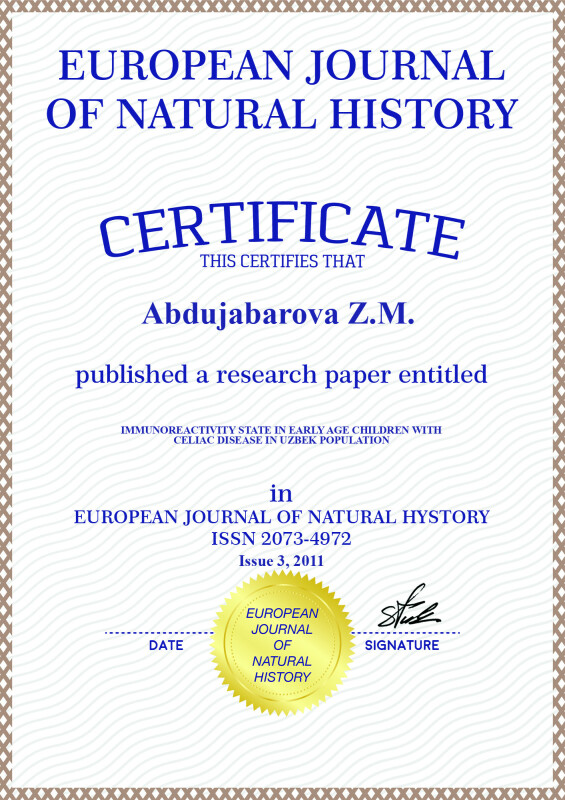 Article in PDF
238 KB
In 20 children with typical (n = 12) and atypical form (n = 8) of celiac disease aged between 1-3 years old, there were studied parameters of cellular immunity, phenotype of immune-competent cells (CD8, SD25, SD95), cytokines, serum and secretory immunoglobulin A (IgA). Studies showed that celiac disease in children is characterized by immunodeficiency in cellular immunity in all levels, change of apoptosis markers and receptors for IL-2. More significant changes were observed in the typical form of the disease. Also, the abrupt increase in IL-4 levels and less significant changes of TNF-alpha are observed, that testifies to the expression of humoral immunity, especially at the local level, as evidenced by high levels of IgA, especially its secretory form.
early age children
celiac disease
immunity
serum and secretory immunoglobulin A
cytokines
interleukin
necrosis factor-α

Celiac disease has been defined as an immune-dependent illness affecting first the gastrointestinal tract that is characterized by nonspecific damage of small intestinal mucosa by gluten, which leads to malabsorption in the intestine. Synonymous with the term «celiac disease» are Gee-Geiter-Geibner´s disease, intestinal infantilism, gluten enteropathy, gluten intolerance, idiopathic steatorrhea (Revnova et al., 2000) [9]. Celiac disease is a long-developing chronic sickness of the small intestine caused by abnormal immune response to food protein gliadin, with the formation of antigliadin antibodies. In addition, the development of the immune process associated with disruption of the structure of the extracellular matrix of the mucosa, which leads to the production of antibodies of autoantibodies.

The purpose of research: to study the immunological parameters in early age children with celiac disease.

We examined 20 children with celiac disease aged 1-3 years who had hospitalized to the department of gastroenterology. The diagnosis was verified based on the criteria of the European Association of Pediatric Gastroenterologists (1999). The diagnosis was made taking into account the presence of communication of the disease manifestation with the introduction of gluten-contained products into nutrition, results of histological examination of biopsy samples of the mucous of duodenum bulb-out part, high levels of antigliadin antibodies IgG and IgA, clinical effect of gluten-free diet, improving of absorption and morphology of the small intestine in exclusion of gluten from the diet. Stage of gluten enteropathy established in accordance with the classification of Marsh M. (1995). The severity of the pathological process and the period of the disease were assessed comprehensively including all major clinical symptoms of bowel impairment, frequency and expressiveness of syndromes of extraintestinal manifestations of disease.

Immunological studies were performed at the Institute of Immunology, Academy of Sciences of the Republic of Uzbekistan. As a control, we used data from the Institute of Immunology obtained by Aripova et al. (2004) [2]. We studied parameters of cellular immunity: the contents of leukocytes, lymphocytes, total amount of T-lymphocytes (CD3), T-helpers/inductors (CD4) and Т-suppressors/cytotoxic lymphocytes (CD8), ratio of CD4/CD8 (immune-regulatory index - IRI), B-lymphocytes (CD20), natural killer cells (CD16), and activation markers of lymphocytes bearing a receptor for IL-2 (CD25) and apoptotic factor (CD95). Phenotype of immune-competent cells (CD8, SD25, SD95) was determined using monoclonal antibodies to differentiation markers (product of the Institute of Immunology of Russian Academy of Medical Sciences, Moscow, Russia) in the reaction of indirect rosette-forming by Zalyalieva-Prokhorova´s method [11].

In blood serum of patients we also determined the contents of cytokines: interleukin-4 (IL-4), necrosis factor-α (TNF-α) by immune-fermentative method. Test-systems for the determination of the cytokines (made by «Cytokine» Ltd., St. Petersburg, Russia) based on the «sandwich» method of hard-phase immune-fermentative analysis with the usage of horseradish peroxidase as an indicator enzyme. Also, we determined the contents of serum and secretory immunoglobulin A (IgA). Secretory one (sIgA) was identified in the saliva used dilution 1/2000. For his purpose we used set of A-8668 IgA-secretory test-system (IFA-BEST «Vector-Best» Ltd).

The data are shown in the table. As the table shows, the number of leukocytes in children with typical and atypical forms of celiac disease was significantly reduced in 1,2-1,3 times (p < 0,01), whereas the relative and absolute numbers of lymphocytes in peripheral blood were not significantly changed.

It is known that the levels of CD3+ lymphocytes represent a population of «mature» differentiated lymphocytes, capable of taking part in the implementation of the immune response. Thus, estimation of the number of T-lymphocytes did not reveal the presence of significant changes to the control. The absolute number of T-lymphocytes in children with typical and atypical forms of celiac disease decreased significantly in 1,3 and 1,56 times, apparently due to reduction in the total pool of leukocytes. The content of T-helper cells also progressively decreased as the disease progresses: authentically in typical and atypical forms 1,44 and 1,94 times, respectively, in comparison with the control group. Identified more expressed changes in children with atypical form of celiac disease suggest to the formation of immunodeficiency in cellular immunity.

Recent studies conducted by Tribole et al. (2002) demonstrate the connection between the weak T-cell response and the undulating course of celiac disease, the predominant cytokine production of T-helper type-2 and the development of long-term chronic disease course [10].

In our studies, analysis of immunophenotype of blood lymphocytes of children with celiac disease showed a significant reduction in the absolute number of CD3+ cells. Decrease in the total pool of T-lymphocytes observed mainly by reducing the number of lymphocytes expressing a marker of lymphocytes CD4+. CD4+ T-cell response to antigens is known from several works (e.g., Oleynik et al., 2004; Parfenov et al., 2003) to be an important mechanism to protect microorganism, as CD4+ cells stimulate antibody production by B-lymphocytes [6, 7].

T-cytotoxic lymphocytes play a central role in the immune response. They are able to secrete proinflammatory cytokines - interferon-alpha, TNF-alpha et al. (Potapnev, 2002; Allahverdiyeva; 2004) [1, 8]. In groups of children with typical and atypical forms of celiac disease, the number of CD8+ cytotoxic T-lymphocytes in a typical course of the disease did not change, whereas in the atypical form it had a tendency to decrease, indicating to the presence of the autoimmune process. This is proved by reduction of IRI, which was in children with typical and atypical forms of celiac disease 1,17 ± 0,09 and 1,01 ± 0,10, respectively, vs. the control group - 1,52 ± 0,11 (p < 0,01). In a typical form of the disease content of CD16+ lymphocytes increased more significantly (in 1,42 times, p < 0,01) than in an atypical one. Study showed that the content of B-lymphocytes had a tendency to increase in children with typical form of celiac disease, that testify to their active participation in the immune response, whereas in an atypical form it trended to decrease, probably, due to slowing of synthetic processes.

It is important to study activation markers of lymphocytes in autoimmune diseases, especially in celiac disease. According to the literature, in the activation of T-lymphocyte, cytokine IL-2 and its receptors play a key role in the development, maturation, and regulation of the immune response, supporting the proliferation of activated T- and B-lymphocytes. IL-2 is a non-specific germ factor of T-cells, which causes functional activation of T-lymphocytes. The main cell producers of IL-2 are T-lymphocytes with a phenotype of T-helper cells, which have functional features of T-helpers type-I. IL-2 also stimulates the proliferation of CD8+ cytotoxic T-lymphocytes and natural killers (CD16+). Soluble receptor of IL-2 may serve as a marker of activation of lymphocytes and the immune system in toto. Moreover, the level of expression of membrane form of this receptor correlates with the concentration of soluble receptor [3, 4, 5]. IL-2 acts only on cells bearing high-affinity receptors for IL-2. Based on this evidence, we investigated CD25+ (cells that contain receptors for IL-2). Analysis of the expression of CD25+ on T- and B-lymphocytes showed a trend to decrease, which seems to indicate activation of CD16+ cells by the other mechanism. Determination of CD95+ cells bearing markers of apoptosis in early age children with celiac disease showed their tendency to decrease, and no difference in the groups studied.

In previous studies by Boychuk et al. (2001) and Mamurov et al. (2003) is reported that the membrane molecule Fas (CD95+) is specialized signal receptor to the induction of apoptosis, and belongs to the family of receptors for TNF-α and nerve growth factor [3, 4]. Natural ligand for Fas-receptor is a ligand FasL (a homologue of TNF-α), which is expressed on some cells under the influence of activation, in this case on lymphocytes. Binding of CD95 with Fas-ligand induces apoptosis of cells expressing CD95.

Based on the data above, we analyzed the levels of TNF-α in peripheral blood serum of children with typical and atypical celiac disease. Our findings showed that TNF-α in children with typical celiac disease tends to increase in comparison with the control, whereas in children with atypical clinical course it tends to decrease. The differences in the contents of TNF-α between two groups of children with celiac disease, probably, due to abnormal development of immune-pathological processes in these forms of the disease. By the spectrum of target cells and biological effects, the TNF-α is congenial to IL-1 and IL-6. Nevertheless, monocytes/macrophages, T-, B- and NK-cells, hematopoietic, fat, cartilage, bone cells react to TNF-α. With its ability to induce apoptosis, TNF-α also causes the generation of active oxygen forms, superoxide-radicals, as well as nitric oxide in the cell membrane. TNF-α is capable of lysing not only the tumor, but the virus-infected or parasites-invasion cells. Cytotoxic effect of TNF-α plays a role in the development of alternative signs of inflammation. In vivo TNF-α enhances antibody production (only thymus-dependent), suppresses delayed-type of hypersensitivity, and interferes to the formation of immunological tolerance.

Study showed that IL-4 in blood serum of children with typical and atypical forms of celiac disease significantly increased in 5,3 and 5,6 times in comparison with the control group. It was established that IL-4 is involved in differentiation of T-helper cells: Th-0 to Th-1 and Th-2. IL-4 acts on B-lymphocytes function in the synthesis of immunoglobulins. IL-4 controls the regulation of TNF-α, IL-1β, IL-5, IL-6, and IL-8 production.

Our studies suggest that in children with celiac disease the pronounced expression of IL-4 can lead to activation of B-cell component of the immune system, increase of immunoglobulins secretion, especially at the local level. Apparently, a significant increase of IL-4 in peripheral blood serum on the background of a slight increase of TNF-alpha, which is a pro-inflammatory cytokine, indicates the important role of immune factors in the development and course of celiac disease. This is confirmed by a more pronounced increase of secretory IgA in 2,29 and 2,34 times, whereas serum IgA increased only 1,34 and 1,49 times, respectively, for typical and atypical forms of celiac disease. Therefore, in children with celiac disease is observed activation of humoral immunity against a background of depression of cellular immunity.

According to available data and our own experience, we can do the following conclusions:

1. In children with celiac disease, is observed the suppression of cellular immunity in all levels against humoral activation, which testifies to formation of immunodeficiency in cellular immunity.

3. The abrupt rise in levels of IL-4 on the background of less significant changes of TNF-alpha testifies to the expression of humoral immunity, especially at the local level, as evidenced by high levels of IgA, especially its secretory form.