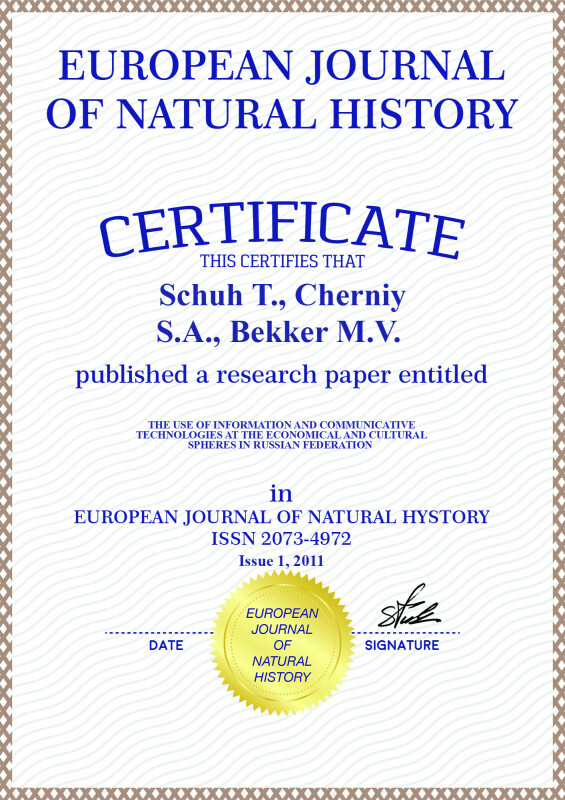 Article in PDF
570 KB
In the article there is analyzed growing influence of informatization on the economy and culture in Russia. There are brought corresponding statistic facts.

Present time is characterized by the rapid growth of using the technical means at the sphere of exchange and treatment of information. Informative-communicative technologies become an integral part of production and social processes, act as an instrument and object of cultural and philosophical analysis. One can speak about «virtualization of reality». Wide use of computer technique, informative innovations, global and local nets have changed the form and regime of many organizations and presented new possibilities to the realization of economical activity and cultural exchange.

The use of informative technologies at industrial and economical sphere allows enterprises to reach the advantages in the competitive strife at the expense of rise of effectiveness of the enterprises´ work, lowering of temporal costs to the carrying out of defined operations, decrease of volume of paper circulation of documents. The use of special programs is revealed at the table 1.

Thereby, the necessity of using the informational technologies and systems is obvious.

In the cultural sphere informatization has led to the lowering of interest to librariesand establishments of cultural-leisure type, but hasn´t influenced publishing activity [2]. These statistic facts are obviously presented in the Table 2.

By the facts of Federal service of state statistic [4] at the sphere of culture and sport, rest and entertainment the use of computers, other types of electronically-calculation technique, computer nets decreases in comparison with 2004 year, but there is positive dynamics from 2005 till 2008 years. (Picture 1; Picture 2) Pic. 1. Number of organizations, which used calculation technique (in percents from the whole number
of examined organizations of these types of activity) Pic. 2 The use of local nets

Pic. 3. The costs on the informative and communicative technologies at the sphere of organization of rest and entertainment culture and sport (millions of rubles) Pic. 4. Circulation in milliards of rubles in year calculation

At the economical sphere the use of informative technologies and systems is rather wide. One of the directions is electronic business and electronic commerce. At the picture 4 there is presented the structure of market of electronic commerce by different goods categories in 2009 year [4].

Modern direction of using the informative technologies in culture is visualization or rendering that means the process of getting the image by the model with the help of computer program, which is comparable with the idea of visualization. In conditions of extensive use of internet-technologies there is sharply stand the question of net culture.

Thereby, in Russian society the informative and communicative technologies are actively used at the spheres of economy and culture. There is realized the importance of their use, development, there is increased the number of organizations, which use different types of informative-calculation technique and computer networks.