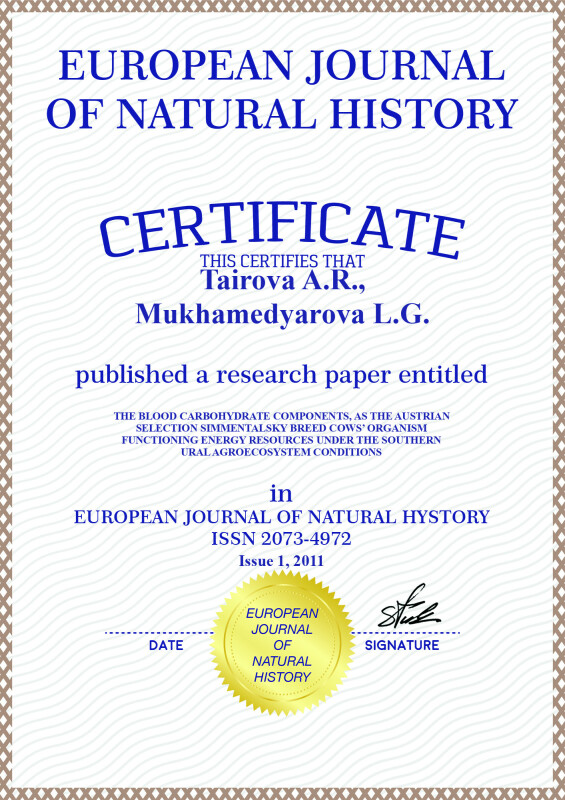 Article in PDF
194 KB
The imported cows into Russia adaptation process is being passed rather difficultly under the new economic – ecologically conditions, and it is being needed the considerable, as the metabolic cost, well as the energy expenditure. The anaerobic oxidation processes are being intensified, against the background of the glucose concentration lowering, having accompanied by the lactic acid (LA) concentration rise in 1,76–1,81 time and the carbohydrate index in 1,32 time, in comparison with the domestic selection Simmentalsky breed cows, and, having testified on the imported cows animal’s organism energo-provision inside-organ sources mobilization.

At present, the dairy cattle number has considerably been decreased in the Russian Federation [1, 4]. In this connection, for the provision purpose of the animals´ genetic potential provision, without which it is quite impossible the further breeding progress intensification, the animals import from abroad necessity has been appeared, which, in many scientists, the scholars and the specialists, the experts opinion, initially have got the necessary genetic direction and the orientation for the milk production [2, 3, 5, 6]. At the same time, the imported animals´ adaptation process is being passed rather difficultly, and it is being accompanied, in the first place, by the general resistance lowering, and by the metabolic processes disorder, having been one from the factors, which are being prevented from the genetic potential realization of the cows´ milk productivity in the new climatic - naturally zones. For all this, it should be noted, that the carbohydrate metabolism is being played specially the significant role in the metabolic processes, as the animal´s organism functioning processes are being provided by the energy, the main source of which the glucose is being acted in the tissues.

Having taken into the consideration the whole above - mentioned material, the economic - scientifically experiment has been carried out by us on the basis of the «Yasnye Polyany» OOC of the Troitzk Region, having imported the Austrian selection Simmentalsky breed heifers by the «APC Development» national project program, and the «Novaya Zarya» OOC of the Chesmensky District of the Chelyabinsk Region, having specialized in the same cattle breed, but by the domestic selection. For the experiment setting and the further carrying out, the two cows groups by 10 heads in the each household, having selected by the analo-
gues - pairs principle, have been formed up by us. The I-st group - the Austrian selection Symmentalsky breed cows, the II-nd group - the domestic selection Symmentalsky breed cows. The main indices valuation of the carbohydrate metabolism has been carried out by the generally accepted methods in the veterinary science.

Having taken into the consideration, that it is quite necessary the aerobic processes for the main physiological functions implementation by the animal´s organism that is the cell respiration, the carbohydrate metabolism indices, having permitted to be tried on the oxidation processes regime and their correlation in the examined cows´ organism have been studied by us.

The anaerobic oxidation processes are being intensified, against the background of the glucose concentration lowering, that is confirmed by the pyroracemic (PRA) and the lactic (LA) acids concentrations change character. In spite of the fact, that the PRA concentration - the glycolysis and the glyconeogenesis major metabolite - has been found at the 144,52 ± 2,64 mkmole/l level (e.g. at its value at the II-nd group cows - 105,12 ± 1,28 mkmole/l), and it has been corresponded to the specific standard values, the LA content - the glycolysis final product - in the I-st group cows blood is being increased more considerably and, it, moreover, is being exceeded the control performance indices in 1,76 and 1,81 time, in comparison with the standard, that should have the unfavorable influence upon the physiological functions series passing (e.g. tissue respiration is being inhibited, the blood pH is being changed into the acid medium, the animal´s organism host defenses are being lowered). The lactic acid (LA) accumulation is being indicated at the oxygen deficiency in the cells, at which the carbohydrates metabolism is being reformed from the aerobic one into the anaerobic one. And the data on the carbohydrate index, having made up 14,75 at the I-st group animals, the 11,15 - at the II-nd group animals, at the normative value, which is equal to 11,62-12,20, are being testified on the same aspect. For all this, it should be noted, that the formed and the fixed PRA and the LA concentration rise tendency at the Austrian selection cows is being taken its place against the background of the quantitative changes from the monocytes side and the polymorphno-nuclear blood cells, having testified on the oxygen-dependent inhibition metabolism, earlier having revealed by us.

Thus, the carbohydrate metabolism peculiarities and the specific features at the imported cows are being connected with the animal´s organism energo-provision inside-organ sources conditioned mobilization, against the background of the hypoxia and mainly the carbohydrate anaerobic oxidation.