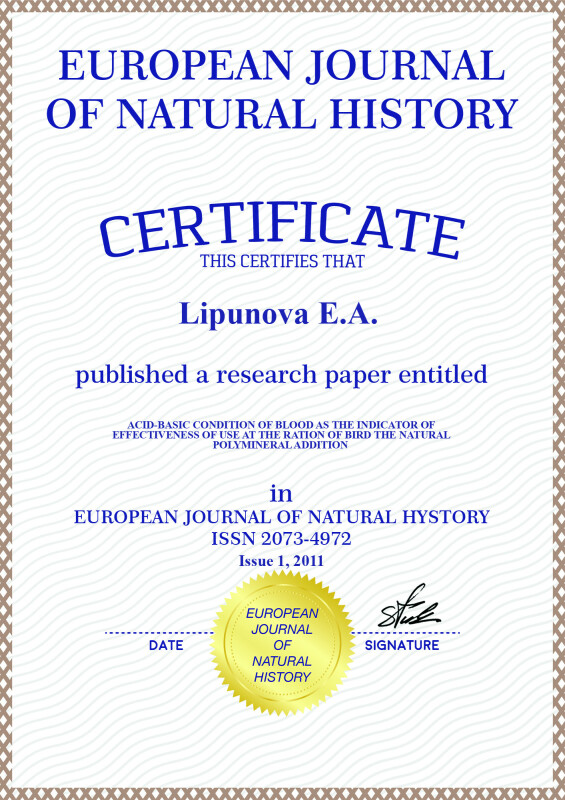 The abnormalities of acid-basic condition (ABC) of the agricultural bird while the anthropogenic loads, high productiveness, discrepancy to the standards of conditions of keeping and feeding become the reason of abnormality of physiological functions.

The aim of research - to assess the effectiveness of use of polimineral addition (PMA) Ecos from the natural hydro aluminum silicate of the deposits of Belgorod region at the feeding of bird [1], using as the integral showing its physiological prosperity and adaptation to the conditions of feeding the acid-basic condition of blood (ABC).

The researches at ducklings of meat directions of cross Medeo were carried out in conditions of vivarium of Belgorod state university; scientifically-producing experience at the ducklings-boilers of cross ISA was carried out at the bird complex «Yasnozorinski» of Belgorod region. By the principles of par-analogues with the taking into consideration of mass of the body and clinical condition there were formed experimental and control groups. The bird of control group received only basic ration (BR), experimental - in addition to
BR - PMD at the optimal doze: 100 mg∙kg-1 of mass of the body for ducklings and chicken (optimal doze of PMD was defined in the special research). The duration of growth of chicken was 49 ducklings - 60 twenty-four-hours. There were taken into consideration the general clinical condition, density of feathering, dynamics of mass of the body, and also average daily increase, eaten feed and safety of bird. There were defined: the active reaction of blood (pHact) by ionomer (Metcller-Toledo, Switzerland, 2000); bicarbonates of plasma (IB) by diffusive method; buffer bases of plasma (BB), standard bicarbonates (SB), displacement of buffer bases (DBB), partial pressure of carbonic acid (рСО2) in the blood by the method of Astrup in modification O. Ziggard-Andersen by nomograms; erythrocytes were calculated at the camera of Goryaev; hemoglobin was defined by hemigloinecyanide method.

While the comparison of showings of ABC of 30- and 60-days old ducklings of control groups 30-days old ducklings had metabolic acidosis, which was supported by low means of значения рНact., deficit of BB and SB in blood correspondingly to 17,0 and 17,1 % (р < 0,05), which were defined by high energy of growth of bird while the insufficient formed mechanisms of homeostatic regulation. The displacement of parameters of ABC at the experimental group was less revealed: SB was 20,2 ± 1,6 milimole∙l-1 against 18,6 ± 1,3 milimole∙l-1 in control, and DBB was higher to 11,5 % (р < 0,05). The more high means of рСО2 promoted the keeping of рНact in the limits of physiological norm (7,42 ± 0,02) and initiated the respiratory regulative mechanisms. 60-days old ducklings (of control and experimental groups) there was observed the balance of ABC, and all the parameters that characterize it were at the limits of physiological norm.

Ducklings, who received with fed the PMD, had the observed acidosis of metabolic nature at the subcompensated phase. The high productiveness of bird was predetermined by intensive metabolism, high oxygen request and considerable displacement ABC of blood. At the experimental groups of birds the changes of its parameters, which reflect the acid-basic homeostasis, were minimal, what is confirmed by the level of BB of blood - of the experimental bird it to the 6,6 % higher than it is of control one (р < 0,05). The acidosis condition of blood of experimental chicken is compensated by rather strong, than it is of control, buffer systems: the concentration of SB is higher to 17,5 % (р < 0,05).

According to existing opinion, one of the mechanisms of compensation and adaptation at the system of acid-basic homeostasis - the increase of transport of oxygen to the tissues and full oxidation of accumulated metabolites [2]. PMD Ecos, having hematopoietic effect, carries out this process at the full measure: regulation and quantitative strategies of adaptation promote the increase of erythrocytes in the blood, and also general hemoglobin and at the separate erythrocyte and oxygen capacity of blood of ducklings and chicken correspondingly to 12,0 and 52,6 %; 7,1 and 18,7 %; 13,4 and 19,3 %; 7,2 and 18,5 % (р < 0,05) [3].

Thereby, the inclusion of polimineral addition to the ration of feeding of birds promotes the forming of strong buffer systems, the most full compensation of displacement at the acid-basic condition of blood, and positively influence the physiological condition, initiates the growth and development, rises productiveness and dietary value of meat [4].