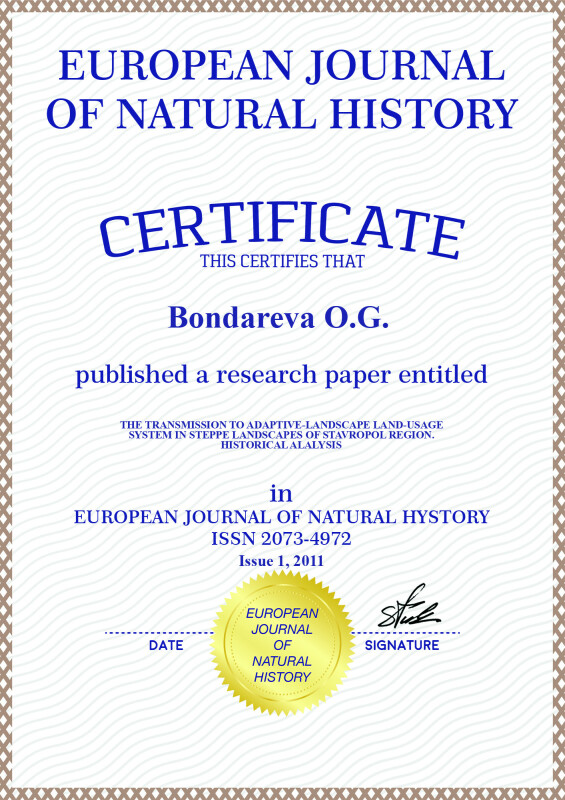 The activation of the land usage on the Stavropol region territory since the second half of the twentieth century led to changes in qualitative characteristics of the soil cover and the development of negative processes. The most impact on the soil happened in the end of the twentieth century. Thus, according to the data of StavropolNIIGirozem from 1996 to 2001 the number of the deflated soils increased by 123,9 thousand hectares (19,7 %), eroded - 11,6 thousand hectares (1,3 %), jointly destroyed by wind and water erosion - 13,6 thousand hectares (9,9 %), overwa-
tered - 55,6 thousand hectares (15,6 %). The real annual loss from the Stavropol region soil funds degradation in prices of 2000 reaches 5 billion rubles. To explain the direction of soil production processes and develop the necessary measures of the fertility increase we need to study the history of the soil usage from the moment of the studied territory lands reclamation.

The historical analysis of the steppe landscapes land use of the Stavropol region with the usage of system approach which studies anthropogenic activity in definite landscape conditions as a single natural anthropogenic system, was carried out on the territory of landscapes situated in the regional centre, the area of joined black earth, solonetz and saline complexes that provide a great example of the irrational land use system. The research region soils were formed on the salted Maykop clay, that, in combination with the dismemberment of the relief surface and negative anthropogenic activity has defined wide development of the degradation processes. The initial insignificant signs of the soil transformation are linked to the landscape occupation by nomads: Nogaits, Turkmen (that came from behind the Kaspyi in the 60-ies of the XVIII-th century), and Kalmyk. The feeding cattle-breeding didn´t had a significant impact on the quality of the natural landscapes because of the small quantity of their husbandries and the presence of free lands (Zhelkanova, 1996).

Five stages that are linked to the land use systems development can be outlined in the natural landscape anthropogenic transformation that left a significant mark on the soil content.

Primitive (fallow and refallow) land use system that was practiced with the abundance of virgin plowing lands, low level of productive force, the domination of grain cultures in the sowing structure with the maximum usage of the natural soil fertility. The picture of the settlement situation and the time of their foundation on this stage reflect the natural landscape differentiation.

Simultaneously with the primitive land use system, with the decrease in the refallow date to one year and the widening of the grown cultures spectrum, in the beginning of the XX-th century the steam (three-field) and brightfield-grass land use systems became widely spread. The increase in the settlers number by 2,5 times lead to the decrease in the free land area. At the same time the estimation of the land fertility potential of the each definite region landscape was quite accurate. The land development was going in two directions. The fertile natural landscapes were getting involved into the intensive agricultural processing. By 1906 the plowing area was increased up to 50 % of the allotment area. Peasants that used a plowing lot for two-three years, left it for the same period with no usage and used it as cattle pasture. The further increase in the settlers´ number lead to the decrease in free lands quantity, so peasants started using brightfield and three-field system. In the second case lands that had unfavourable physical and chemical qualities were to be transferred to the Demesnial department. These lands became the property of the Royal family. They were not supposed to be ploughed up and were demised as cattle pastures from 1873 to 1885 to the owners of the large ship flocks. Further on the ploughing of the Demesnial land was regulated by a number of «conditions».

These land use systems existed till the period of collectivization (1930-ies). The ploughing of the region did not exceed 38 % till the civil war.

The transitory grassfield system of land use that was developed by V.S. Williams, was recommended in 1920-ies-1930-ies instead of the classic three-field and existed up till the 50-ies. Its major goal was the land fertility increase in biological way, by sawing grass compositions from bean and cereal grass. Within the period of its supremacy the region´s ploughing was under 42 %.

The development of the intensive land use system since the 1950-ies was carried out gradually, as far as the development of agrochemical and machine building industry took place, and its first period is linked to the ploughing of a significant area of virgin and fallow land, that lead to the transformation of natural landscapes on the subsystem level. In a small time period the sawing area is increased by 2 times and the total ploughing reaches 56,4 % of the region. The increase in plowing lot area becomes possible because of the beds and land fund of Demesnial steppe plouging up without considering soil and relief landscape peculiarities that lead to the intensification of the agrolandscapes ecological situation. The second period started with a wide development of grain-cultivated and grain-steam-cultivated crop rotation. The all-around production of cultivated crops on the ploughed up surface lands lead to the strengthening of the erosion processes, the decrease in humus content on the surface lands and steam fields. The third period is related to the development of the intensive chemicalization and the usage of high mineral fertilizers doses. At this time the phosphatation and nitration of separate fields and euthrofication of water bodies because of the washout of the fertilizers from fields, takes place.

Within the time of the intensive land use system existence the humus deposits in eroded soils decreased by 32,7 %, and the water resistance - by 44 %. The steepness of surface (up to 10-15 °), suffosive processes on these soils had defined the intensive development of the junction and shower erosion. About 4 thousand hectares of poughed fields and 25,4 thousand of natural lands were exposed to water and wind erosion of medium and strong degree.

At the end of the XX-th century the adaptive-landscape or landscape-ecological land use starts its advance in the region. It is oriented for the maximum description into nature, the following of its laws, differential and address usage of the territory specificity. The reproduction of the soil fertility in these systems is provided by the cultivation of a wide spectrum of grain-bean and feeding cultures, including one-year and many-years grass.

The major problem of the further address territory usage is the making of the incline corner maps of the research area that are necessary for the calculation of the erosive danger of the separate land use area. Also the making of the soil-landscape husbandries maps with the outlining of the areas, tracts, and factions for the implementation of complex soil analysis of the modern land usage condition and the development of the necessary measures.

The work was submitted for the international scientific conference «The problems of agroindustrial complex», (Bangkok, Pataya, Thailand), 20-30th of December 2010, came to the editorial office оn 14.10.2010