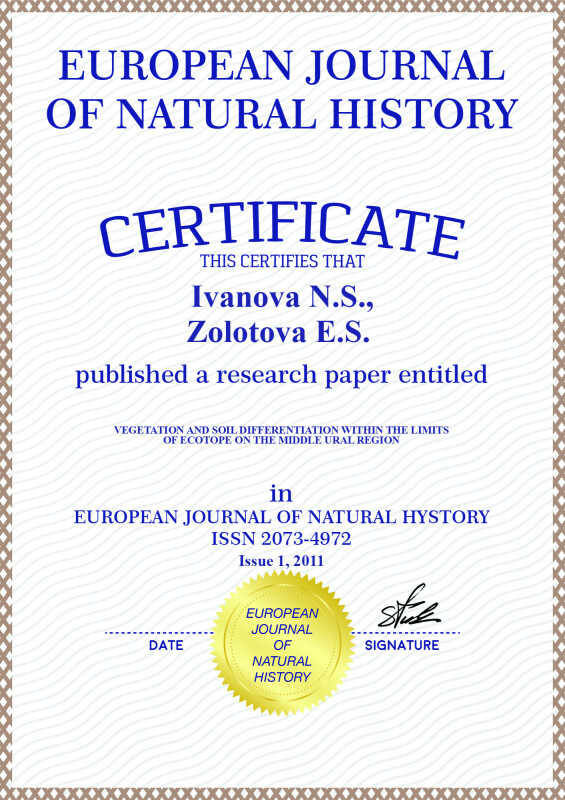 Article in PDF
203 KB
Transformation of vegetation and soil, which takes place in dark-coniferous forests under the action of clear fellings, fires and haymaking in dominating forest conditions of the mountains of the Middle Urals (at the bottom of draining gentle slopes), was studied. It was found that strong anthropogenic effects lead to appearance of a wide spectrum of vegetation communities within a single forest ecotope (one type of radical forests). For a long time these vegetation communities differ by the structure of all vegetation layers, conditions of soil formation, and, consequently, by the direction and intensity of restoration processes.

The increase in the transformation rate of biosphere ecosystems makes it very topical to preserve study natural complexes forming the biosphere and examine trends of their dynamics developing under the action of particular anthropogenic factors. Detailed quantitative studies are needed to further advance theoretical and methodical concepts underlying analysis of the structure of biogeocenoses and processes that take place in those biogeocenoses. This paper deals with the study of correlations in vegetation differentiation in dark-coniferous forests and soils under the action of clear fellings, fires, haymaking, and other anthropogenic effects in the mountains of the Middle Urals. This work was supported by the Presidium of RAS (project 09-П-4-1039).

The study was conducted (1999-2010) in Sverdlovsk region (57°00´-57°05´ N and 60°15´- 60°25´ W). Test sites were located in similar geomorphological elements, namely at the bottom of draining gentle slopes, which represent the most widely occurring group of forest conditions. Stable fresh loamy soils are formed on gruss eluvium-talus deposits of crystalline rocks. As a result, podsolization and gleying processes are limited and brown-type soils become more frequent in these forest conditions (Firsova, 1977). Forest, geobotanic and soil conditions were examined in detail using universally accepted methods (Programs and methods..., 1974). Characteristics of the tree stand, soil, the conifer regrowth and the herbaceous-shrub layer are given in the Table. The number of regrowth was determined in two perpendicular strips 4×40 m in size, which were divided into boxes 2×2 m in size. Productivity of lower layers was examined in 6 to 20 boxes 1×1 m in size organized on each test site depending on particular mosaic pattern of the cover. Vegetation was cut at the soil level and the hay crop was analyzed for species.

The structure of formed phytocenoses was found to differ sharply within a single type of forest conditions for subradical spruce forests, derivative birch forests and post-forest hay meadows (see Table). Anthropogenic effects cause changes in structure of vegetation communities: the species composition and gross productivity of lower layers. The quantitative ratio of species is altered most. Species forming the main background of lower layers in spruce forests (Oxalis acetosella, Asarum europaeum, Viola selkirkii) lose sharply in their biomass in derivative birch forests and are absent altogether from phytocenoses in meadows. Derivative phytocenoses are dominated by species, which are occasionally present in subradical spruce forests: Calamagrostis arundinacea, Carex sp. under the canopy of birch forests, and Cirsium heterophyllum, Trollius europaeus, Calamagrostis arundinacea, Deschampsia caespitosa, Crepis paludosa, and Agrostis tenuis in hay meadows. Hay meadows are also distinguished for largest floristic diversity (55 species of vascular plants). The gross biomass increases (see Table). The gross biomass decreases only under the canopy of birch forests with unit spruce regrowth, where dead-cover synusias are formed mostly. Soils in post-catastrophic communities (derivative associations) are at different stages of demutation development. Humus and soil horizons are formed there in conjunction with development of forest vegetation during successions. Fellings in spruce forests of the Middle Ural region do not alter the type of soil formation in short-term derivative birch forests, which have, similar to subradical spruce forests (Zubareva, Firsova, 1963; Ivanova, Novogorodova, Chetkina, 2000), mountain-forest brown soils with a typical set of horizons: A0, A1, AB, B1, B2, and BC. The horizon depth depends mainly on the loamy layer thickness. The influence of the tree canopy, which is restored after clear fellings, is readily seen in separate biogroups. The profile differentiation increases in conifer groves thanks to light horizons A1A2 and A2B: podsolized brown soils are formed. Horizons A0 and A1 are turfed, while the pale-yellow subhumus horizon A1A2 is weakly podsolized in a 65-year hay meadow: meadow-forest pale-yellow podsolized turf soils are formed (Ivanova, Novogorodova, Chetkina, 2000). So, clear fellings and other anthropogenic effects cause appearance of a set of vegetation communities within a single ecotope (one radical forests type). For a long time these communities differ sharply by the structure of all vegetation layers and have specific features of soil formation. Consequently, they differ by the direction and intensity of restoration processes: from restoration of dark-coniferous forests to formation of appearance of polydominant multi-species herbaceous communities in hay meadows. They cannot be referred to one forests type or one vegetation association. Therefore it is necessary to study comprehensively convergence and divergence of vegetation in order to work out an objective classification and determine correctly the syntaxonomic rank of derivative phytocenoses.

Differentiation of structure of vegetation communities in a single forest type conditions
(P - Picea obovata, B - Betula pendula, B. pubescens)